Patent courts in France, Italy, the Netherlands, the UK and Germany are seeing a decline in newly-filed patent cases. This is especially evident in London, where last year its patent courts coped with the consequences of the coronavirus pandemic and Brexit. However, despite a general overall decrease, courts in The Hague, Milan and Paris took advantage of London's hesitation, raising their profiles by hosting similarly complex proceedings. 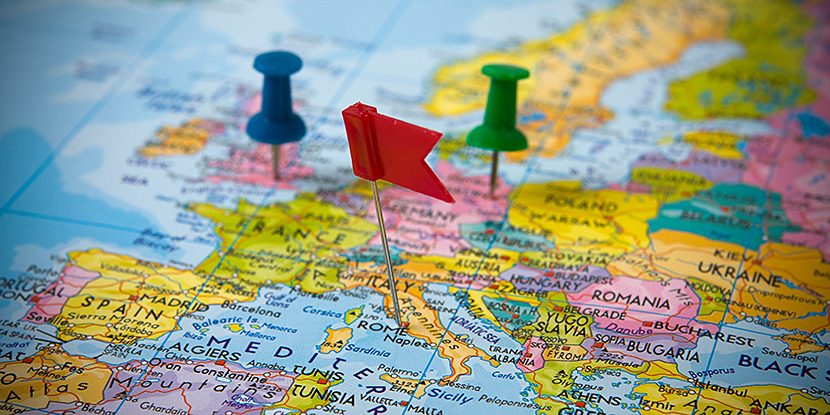 The Unified Patent Court has hit many roadblocks over the years, but the will for the system remains ©rachwal/ADOBE STOCK

On Wednesday, JUVE Patent reported that the seven major patent courts in Germany altogether experienced a 9% drop in new cases in 2020. This result is just one from JUVE Patent’s fourth survey of newly-filed cases at Germany’s patent courts. Now, further research shows the other major European patent courts are experiencing a similar trend.

Whether in Düsseldorf, Mannheim, Milan, Paris, London or The Hague, the number of newly-filed patent cases is declining almost everywhere. Only in Munich, which recently opened a third patent chamber, did the numbers recently increase. 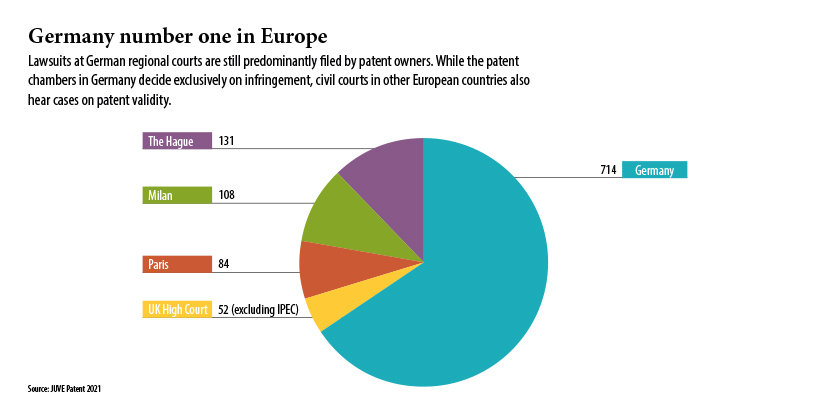 As in Germany, the UK’s first instance High Court recorded a decline in 2020, according to statistics obtained from the Ministry of Justice. In total, parties recently filed 52 new lawsuits concerning technical property rights. This represents a slight decrease of just under 5.5% compared with the previous year. However, in 2018 the number was even lower, with 40 lawsuits filed.

In contrast, the High Court saw significantly more new patent lawsuits in the two previous years. While 2016 saw a total of 71 cases, the number rose to 85 in 2017. With eleven lawsuits filed in the first quarter of 2021, the UK court is at roughly equal to the ten suits parties filed in the same quarter in 2020.

In addition, the Intellectual Property Enterprise Court (IPEC) hears patent disputes of small and medium-sized companies, most of which are of minor economic importance. However, the IPEC is not part of the High Court. According to figures obtained from the Ministry of Justice, the total number of new lawsuits at the IPEC is 156. This represents a 28% decrease, compared to the 217 cases filed the previous year.

However, the court does not distinguish cases relating to technical property rights from other types of IP cases. As such, the figure represents all new IP lawsuits. Industry experts estimate the share of patent disputes among IPEC proceedings to be 15-20%.

Recent high-profile patent disputes at the High Court include Sisvel versus Xiaomi and Oppo over mobile phone standards, and the case between British American Tobacco and Philip Morris over e-cigarettes.

However, just two years ago the UK judiciary faced a crisis. Across 2019 and 2020, the numbers of IP and patent-specialist judges at the UK High Court depleted. Just two judges, Colin Birss and Richard Arnold, remained to steer the ship at the High Court. But their promotions to the Court of Appeal soon created two more spaces at the court of first instance.

Birss is best known for his landmark ruling in the dispute between Unwired Planet and Huawei. The UK High Court became the first court to determine global FRAND licenses for SEP. One lawyer told JUVE Patent, “He is arguably responsible for most influential FRAND case law in Europe”. Others praise him for his “drive to make the UK courts efficient and more cost-effective” and as “an expert strategist with true judge craft and top-level experience and expertise.”

But, from autumn 2020, the Judicial Appointments Committee (JAC) began to fill the gaps. In September 2020 and January 2021, Richard Meade and James Mellor became the UK High Court’s next IP-specialist judges.

The appointments quashed worries about the UK courts’ capacity to hear high-value, high-profile and highly-technical patent cases. The JAC chose candidates more than capable of living up to the reputation of their predecessors. Lawyers already praise Meade as “a robust decision-maker,” who was “one of the most respected IP QCs” before his appointment to High Court judge.

The Netherlands top for cross-border

The Court of Justice The Hague is the court of first instance in the Netherlands dealing with patent cases. However, it too has experienced a decline in the number of lawsuits filed by parties. According to the court’s 2020 annual report, the court recorded 131 newly-filed cases. This is around 8.4% fewer than the 143 cases filed by parties in 2019. The court also settled fewer cases, deciding on 103 rather than the 155 for which it had budgeted.

According to the report, the rising complexity of the lawsuits largely contributed to the decrease.

Like the UK, Germany and France, companies increasingly turn to to the Netherlands for technically complex pan-European patent disputes. For example, Swedish mobile phone company Ericsson sued Samsung in the Netherlands, Belgium and Germany for infringement of mobile phone patents at the beginning of the year.

Shortly afterwards, both parties announced a multi-year agreement on global patent licences. This includes patents relating to all cellular technologies and 5G. Sisvel has also filed suits against Xiaomi and Oppo as part of its global SEP litigation.

According to the annual report, the coronavirus measures were also a contributing factor in fewer cases being settled. This is because, initially, the court could not conduct proceedings in person.

Patent lawyers heap particular praise on presiding judge Nathalie Sabotier and deputy Carine Gillet. One lawyer says, “They are bringing patent litigation in France to another level”. Litigators also welcome that Sabotier and Gillet delve into the case detail, some of which are highly complex from a technical point of view. Thus, the two judges have acquired a level of expertise otherwise unusual in the French judiciary, whereby judges tend to regularly transfer between other courts and specialties.

According to the chamber responsible for IP, in 2020 the first-instance Tribunal Judiciaire in Paris received 84 patent suits. In the same period, the court handed down 76 case judgments, ending 36 via other means.

The Paris court is hearing more prominent cases, some of which are pan-European, such as proceedings between Philips and TCL. The court also judged in the high-profile ruling in Eli Lilly vs. Fresenius Kabi, in which the court awarded Eli Lilly €28 million in damages. This is one of the highest sums seen so far in a French patent dispute.

Paris was also the setting for the opening hearing in the Europe-wide dispute between Intellectual Ventures and various mobile communications companies. Above all, in France the case concerned Orange and Bouygues Telecom. Gone are the days when France had a reputation for ruling in favour of patent users. Now, patent litigators from well-known law firms praise the judges as “very independent.”

Thus, the Paris court is increasingly establishing itself as an attractive location for high-profile patent disputes.

Italy is also becoming more of a focus for the European patent community, particularly in pan-European pharmaceutical and biosimilar disputes. In fact, Italian patent courts play a role in all major European pharmaceutical disputes. This is either due to the importance of the Italian market for the manufacturer, or because it is the country which produces the disputed product.

Parties particularly consider the patent court in Milan, presided over by judge Claudio Marangoni, as highly competent in pharmaceutical disputes. Exclusive to JUVE Patent, the IP chamber of the Tribunale di Milano reported a total of 58 new main proceedings for 2020, plus around 50 injunction proceedings.

Similar to courts in the other countries, the Milan court also recorded a decline compared to the previous year. In 2020, the court saw 77 main proceedings and 57 injunction proceedings. Furthermore, the court decided 24 cases via judgment, settling a further 35 cases by other means.

PI proceedings in the main

The possibility of obtaining a preliminary injunction relatively quickly is a strategic advantage. Another plus is that the Italian courts conduct PI proceedings as if they were main proceedings. Thereby, the court also examines patent validity. If parties obtain a favourable decision in Italy, this can be advantageous for proceedings in other countries. Bayer conducted these types of proceedings against Ceva for infringement of a medical veterinary preparation to treat piglets.

Companies also approach Italian courts when the sales market is interesting. Thus, Italy is the setting for many pan-European patent cases, such as the dispute between British American Tobacco (BAT) and Philip Morris over the emerging ‘heat not burn’ e-cigarette technology. It also hosts part of the dispute between Edwards Lifesciences and Meril Life Sciences over heart valve technology.

NPE Sisvel is also taking action in its home country against Chinese mobile phone manufacturers such as Xiaomi, Oppo and One Plus. But, according to an IP partner at a full-service firm, so far “pharma disputes far outweigh SEP disputes, and Italy imports most of the cases.”

Patent cases in the future

It is unclear, the extent to which the coronavirus pandemic affected declining numbers at most patent courts. When the courts closed their doors in spring 2020, market experts assumed that this would negatively impact the work of the patent chambers.

However, after court closures and the suspension of proceedings from March 2020, most courts in Europe resumed litigation activity in the middle of the year, or even faster than expected – often digitally. For example, at the end of April, the District Court The Hague conducted the Sisvel lawsuit against BKK, Oppo, OnePlus and Wiko via video.

In the UK, Colin Birss – at the time still at the High Court – had already conducted the first patent hearing via Skype at the end of March. As the lockdown eased last summer, the court also introduced a hybrid system. In Germany, Munich Regional Court held video hearings at an early stage. The 7th Civil Chamber conducted its first case at the end of April 2020.

In France, however, this type of hearing has not become established for patent cases. In an interview with JUVE Patent, first president and judge at the Tribunal judiciaire de Paris, Nathalie Sabotier, acknowledged that judging a case purely by written submissions is, for patent cases, inadequate.

However, in large proceedings where only a limited number of people are allowed in the courtroom, involved parties that are not actively part of the oral proceedings can join via video. For example, the two-day opening hearing in the dispute between Intellectual Ventures against Orange and Bouygues Telecom utilised this function.

Even though the number of proceedings is falling overall, the complexity of cases is increasing everywhere. This is especially in relation to new technologies such as 5G and connected cars. This poses challenges for the courts, not least in terms of staffing. A younger generation of patent judges more open to digitisation is increasingly taking the helm.

Therefore, that patent chambers are often pioneers in switching to video hearings is unsurprising. The courts are quickly adapting to technical challenges – not only in external circumstances, but also in terms of the lawsuits themselves.

According to in-house lawyers, the economic situation of companies also had an impact on their litigiousness. However, this is to a lesser extent than the technical and organisational challenges of the pandemic.

The head of patents at a German automotive supplier says, “The big, important patent disputes continue with the same rigor as before the pandemic.” He adds that their complexity is even increasing. “For small, economically less significant cases, however, the final decision is often not to file them.”