Regina Hock is the new president of the Federal Patent Court in Germany, succeeding outgoing president Beate Schmidt. However, Hock faces some difficult tasks. The court has recently been heavily criticised for the long duration of its proceedings. As a result, the German bifurcation system is viewed by some experts as being out of sync. 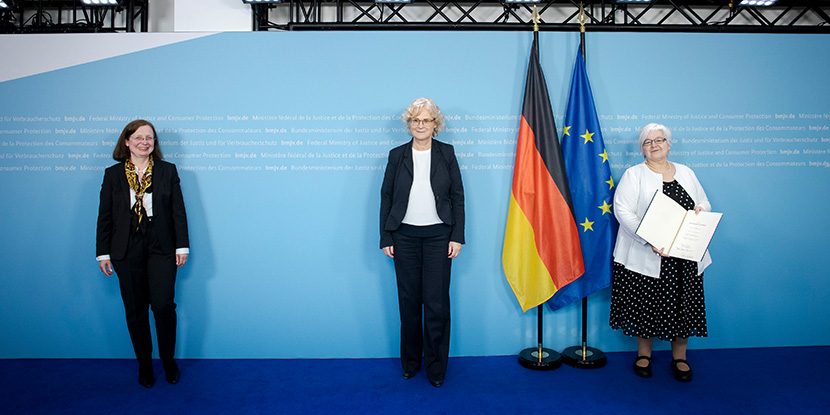 German Federal Minister of Justice, Christine Lambrecht (centre), during a virtual change of office of the Federal Patent Court at the Federal Ministry of Justice. Regina Hock (left) is the new president of the court, succeeding Beate Schmidt (right). ©Janine Schmitz/ photothek.de

Beate Schmidt has handed over the leadership of the German Federal Patent Court to Regina Hock. The new leadership, which came into effect at the end of April, means the fourth time that a female has led the court in Munich. 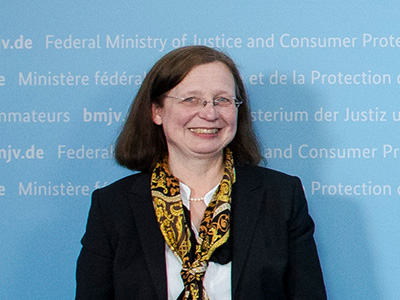 However, Regina Hock is no stranger to the Federal Patent Court. From 2000 to 2010, she worked in its trademark and technical appeal division as a judge. She was also temporarily responsible for public relations and international affairs.

Hock started her professional career in the Bavarian judiciary. There, the lawyer worked, among other things, as a judge and public prosecutor, as well as an advisor in the Bavarian State Chancellery.

Now, as in recent years, the two most important IP institutions in Germany will be headed by women. Furthermore, another woman Cornelia Rudloff-Schäffer heads up the DPMA.

Most experts consider this so-called injunction gap as the fundamental ill of the German patent system. Many months pass between the first instance infringement decision, which may lead to an automatic injunction, and the Federal Patent Court decision on the validity of the patent in question.

Solving this problem is likely to be a major task for the new president. According to attorneys and in-house counsel, structural reforms are necessary, for example in the allocation of duties among the senates. But, as court users repeatedly demanded in surveys and interviews, judges would have to increase their productivity.

Recently, observers have levelled such criticism not only at the court’s leadership, but also at the federal government.

Many experts think a change in the law is superfluous, whereas a financial and personnel strengthening of the Federal Patent Court is unavoidable.

The German government would be well-advised to provide the Federal Patent Court with a considerable boost in staff numbers. It could also approve further senates. This is the only way to ensure quick nullity judgments again.

Currently, the German parliament is debating a new Federal government patent law. The Bundestag is expected to take a vote before the summer break. In autumn, Germany will elect a new parliament and a new government.

At the core of the new law is adjustment of regulations for the automatic injunction. Judges are to be able to make better use of their discretionary powers, for example to mitigate the consequences of the injunction gap.

However, many believe that the real problem is not the current rules on automatic injunction, but the injunction gap itself. Therefore, for a long time, many experts have called for more staff for the Federal Patent Court.

The Federal Government has finally promised this change. However, future concrete plans for this are unknown.