Majority of patent community still in favour of UPC

According to a recent opinion poll by JUVE Patent, the Unified Patent Court continues to enjoy strong support in the patent community. A large majority of participants are also in favour of moving the pharmaceuticals and chemicals parts of the Central Division, previously based in London, to Paris. Milan also ranks high among survey participants, many of whom come from France and Germany. 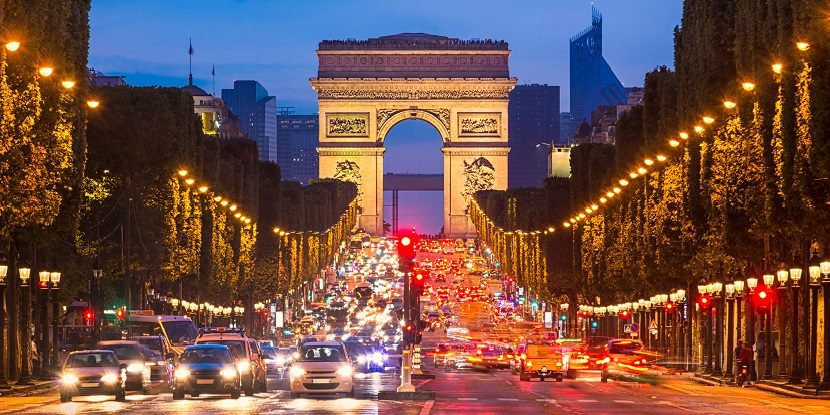 Now that the launch of the Unified Patent Court is looking increasingly likely again, what do its future users think of the new court?

In September 2021, JUVE Patent asked the heads of patent departments in selected technology companies across the world, as well as lawyers and patent attorneys at major law firms with patent expertise, for their opinion. Almost 1,300 stakeholders took part in the survey.

UPC yes or no?

JUVE Patent asked the survey participants whether they still support the UPC. With almost 86%, a large majority is in favour of the new court.

The European patent court has experienced many ups and downs in the last ten years, including constitutional complaints in Germany and the UK leaving the project due to Brexit. Accordingly, support for the court has also fluctuated greatly over the years.

However, in the first half of 2021, legislators and the German Federal Constitutional Court cleared the way for German ratification. Now Austria still has to ratify the protocol on the provisional agreement (PAP) so that launch preparations can begin at the turn of the year. UPC officials are aiming for a start in 2022 at the earliest.

A majority of around 45% of respondents who answered the question of where the former London division should go would like to see it in Paris. This result is partly due to the high number of French stakeholders who took part in the survey.

At just over 26%, a quarter of the respondents would like to see the division located in Milan. These cities were followed by Munich and Amsterdam respectively. 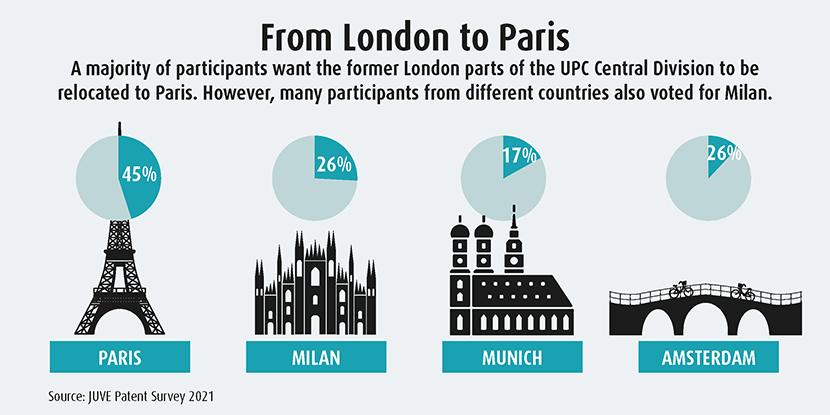 Originally, London was to home the Central Divisions for pharmaceuticals and chemicals. The remaining parts of the Central Division were allocated to Paris and Munich. Paris is the headquarters and administrative centre of this important part of the UPC. In addition, the UPC has local chambers and a court of appeal in Luxembourg.

However, now that the UK has left the UPC project, the London parts of the Central Division need a new home. Temporarily, the divisions will be housed in Paris and Munich until the member states come to a final decision.

Not surprisingly, mainly French experts voted for Paris as the final seat, whereas German experts are in favour of giving the former London parts to Munich.

Votes from other European countries and the US, on the other hand, went to Milan and Amsterdam. Milan has already officially applied for the seat. According to JUVE patent information, the Netherlands is preparing a similar move for Amsterdam.

While patent experts from France and Germany made up the bulk of participants with over 35% from each country, the British respondents were more reticent with their opinion. Only 7% of respondents hailed from the former EU member state. This could be due to Brexit, which precludes any UPC judges from the UK.

Patent experts from other European countries also responded, as well as some from the US, Asia and Africa. For example, Italy is a market player that has not been much in the spotlight so far. Around 6% of respondents were from Italy – about the same as those from the Benelux countries.

With almost 55%, patent attorneys made up the largest proportion of respondents, followed by lawyers from law firms with around 35%. Around 5.5% of participants work as patent experts in companies.

The survey asked respondents generally for their favourite candidates for the new court, and especially the Court of Appeal. Not all participants answered all the questions.

JUVE Patent also wanted to know, in the opinion of patent experts, which judges in the participating states of Germany, France, Italy and the Netherlands are particularly suited to the UPC.