Tonight, in a corona-compliant video awards ceremony, JUVE presented its annual Law Firm of the Year awards. Among 18 categories, the winner of the IP Law Firm of 2020 was announced as Quinn Emanuel. A trophy was also awarded to an outstanding German In-house IP Team of the Year. 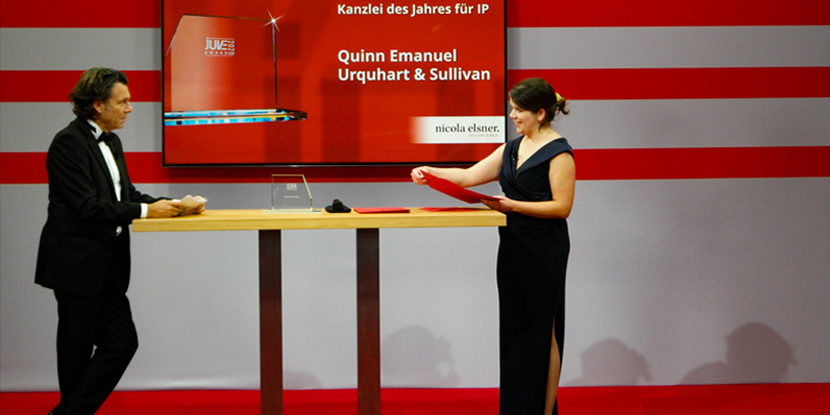 Tonight, the JUVE Awards 2020 has announced the German team of US firm Quinn Emanuel Urquhart Sullivan as the winner of IP Law Firm of the Year.

For a long time, patent litigation at Quinn Emanuel was the extremely successful one-man show of star lawyer Marcus Grosch. But the market is now also seeing young big-hitters like Jesko Preuß and Jérôme Kommer in complex proceedings. The increased visibility of the younger partners is significantly raising the clout of Quinn Emanuel’s German IP team. Increasing numbers of high-profile clients are instructing the team in important cases, such as in the burgeoning connected cars market in Germany.

The expanding team is continuing to secure future big-ticket litigation as well as growing its associate headcount, meaning it can take on other lucrative cases. An example is for BASF regarding modern shoe soles, and for Netflix involving streaming technologies.

Qualcomm’s mammoth suit against Apple was soon followed by the high-profile defence of Daimler in the connected cars suits by Broadcom, Nokia and other SEP holders. The firm is also conducting major proceedings for Blackberry, Google and IP Bridge involving mobile communications patents. Quinn Emanuel is also in action for Pfizer and Merck in cases involving important pharmaceutical drugs. Such cases give the team a welcome visibility in the life sciences sector.

Every year, JUVE awards the title of JUVE IP Firm of the Year for a firm’s annual work and achievements. All the nominees have demonstrated a strong performance and strategic development in soft IP, patent law or both. The successful handling of prominent cases and the dynamic development of the IP practice play an important role.

Since 2018, JUVE has also bestowed an award to the IP In-house Team of the Year. Here, the editorial team selects a winner from five nominees doing outstanding work and forging demonstrable dynamic growth. JUVE also considers teams in soft IP and the patent field.

In 2019, the winners of JUVE IP Law Firm of the Year and In-house IP Team of the Year were Düsseldorf boutique Arnold Ruess and industrial engineering conglomerate Thyssenkrupp respectively. The judging process recognised the latter for a remarkable overhaul of its IP department. Arnold Ruess was recognised for its pharmaceutical expertise and high-profile clients.

The awards took place on 29 October 2020. Go to juve-tv.de for more details of the judging process. To keep up-to-date with any developments, follow the hashtags #JUVEAwards and #JUVEAwards2020.