European patent litigation and prosecution firms have raised their hourly rates by just 0.2%, according to a survey conducted by JUVE Patent. Some continental European law firms even lowered their rates during the coronavirus crisis. UK litigation firms, on the other hand, took advantage of Brexit to increase their hourly billing fee. 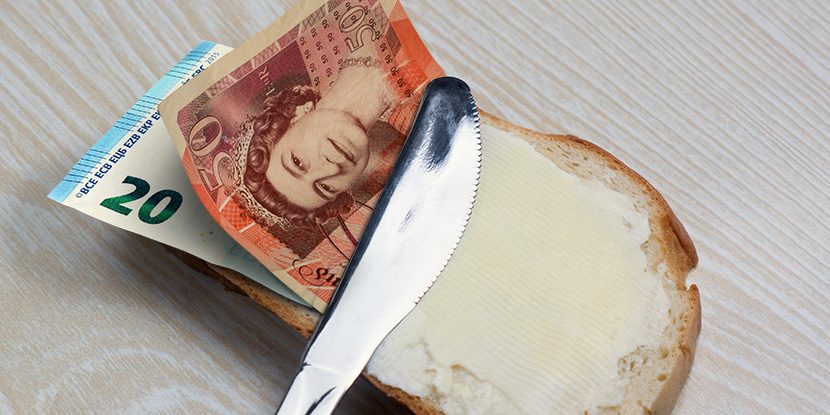 Despite Brexit, the UK's patent firms remain well ahead of their competitors on the European continent in terms of hourly rates for litigation and prosecution. ©Dominik Rosse/JUVE

€700 is substantial in terms of hourly rates, even for a European partner specialising in patent litigation. This is what a partner at a leading German patent litigation firm charges on average per hour in a normal infringement case.

In contrast, in 2021, partners in law and patent attorney firms across Europe charged an average of €460 per hour for patent litigation. This is one result of a current survey by JUVE Patent among European patent firms.

As one litigator explains, “In global litigation campaigns, US law firms make it quite clear that Europeans should please refrain from ruining the nice US rates with the usual domestic hourly rates.” Thus, even at €700, a German lawyer would be accused of price dumping.

However, UK patent firms do not have a reputation for price dumping. According to the JUVE Patent survey results, they charge an average of €673 per hour when it comes to litigation (see: ‘Benchmark UK rates’). 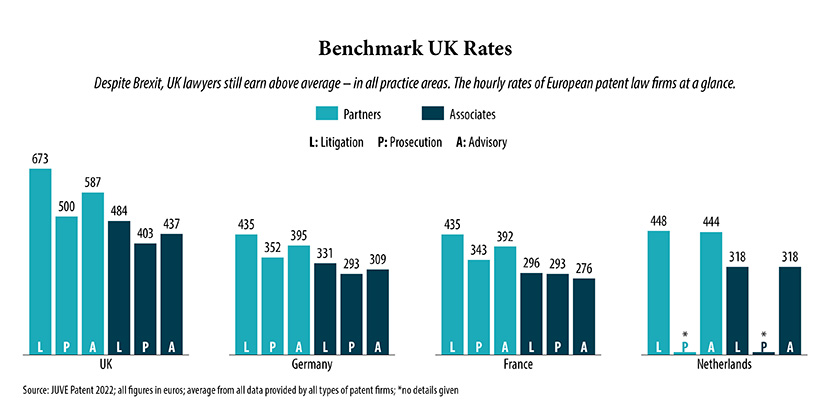 Partners of UK pure law firms charge €850 per hour. However, even these do not come close to the hourly rates of law firms in New York or Silicon Valley. UK firms are also a world apart from law firms on the European continent.

Once again, JUVE Patent has researched the hourly rates of patent law firms in the UK, Germany, France and the Netherlands. All have different business models.

According to the survey, most firms did not increase their hourly rates in 2021. Some firms, especially French firms and pure patent attorney firms in Germany, even reduced them slightly. Currently the reasons for this are unclear, since JUVE Patent collects the data for statistical purposes only. As a rule, the law firms do not explain their data.

However, in many personal conversations, patent attorneys in particular report that the coronavirus pandemic has put standard patent prosecution business under pressure. As a result, the firms have made price concessions. But there is no talk of a dramatic slump.

Patent litigation on the rise

The patent litigation business is clearly on the upswing. Many litigation teams in pure and mixed law firms report a very high workload. Partners from all Europe’s important patent jurisdictions claim to be preparing a high number of lawsuits and defence strategies, in the mobile communications sector in particular. The firms also report many new cases concerning classic drugs and biosimilars. 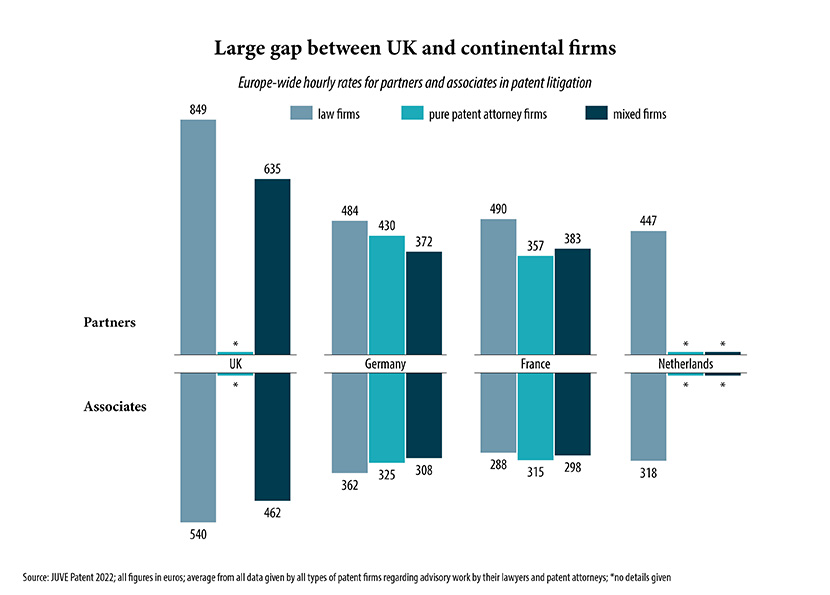 However, the purported upswing in patent litigation cases is not reflected in the actual number of cases which law firms filed with the patent courts in the UK, Germany, France, Italy and the Netherlands.

According to another JUVE Patent survey, the number of new cases filed with civil courts actually declined slightly in 2020. Often, many partners report, clients agree on a licence before going to court. Then the lawsuits disappear back into the drawers of lawyers’ desks.

In any case, in autumn 2021 UK law firms reported high workloads for their teams. The consensus in London is that, so far, Brexit has not negatively impacted the UK patent litigation business. On the contrary, some firms have increased their prices.

Regardless of whether they are pure or mixed firms, almost all UK law firms surveyed by JUVE Patent increased their hourly rates by some degree.

For patent litigation and consulting services, the increases in partner rates ranged between £20 and £70. The increase is even more significant, given the exchange rate of the British pound to the euro recovered in 2021 compared to the previous year.

Restraint on the continent

A significant difference remains between the hourly rates charged by UK law firms and their competitors on the European continent. This difference is also significantly greater for litigation and advice than in patent prosecution. 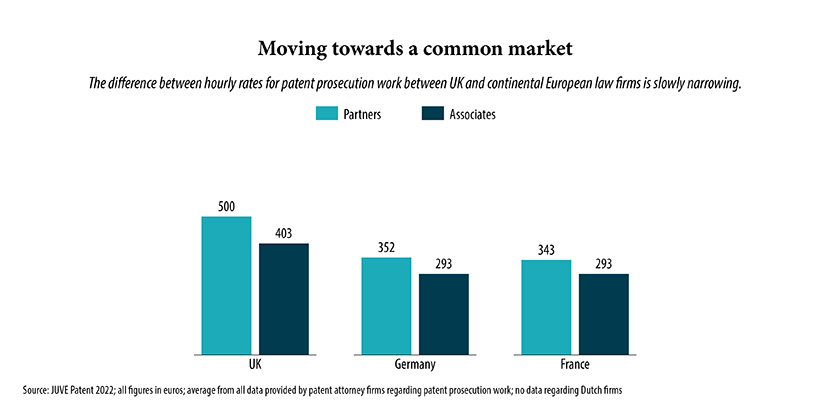 But in patent litigation and advice, continental European firms are not exploiting their potential. Only a few German law firms increased their hourly rates at partner level. They charge an average of €484 per hour for litigation, while UK firms charge €850.

The gap is less stark for associates, with German firms charging around €360 and UK firms €540. The situation looks similar for hourly rates in advice provided by law firms (see: ‘Large gap between UK and continental firms’). The narrower gap in associate rates is due to German law firms recently increasing associate rates.

The hesitancy among German patent firms to increase their rates overall may be explained by their strong roots with medium-sized companies or national consortia. Usually, these do not regularly pay hourly rates at US level. French and Dutch firms face the same constraints.

But French law firms can apparently still charge the highest partner rates on the continent. On average, these are €490. But when it comes to associate rates, German law firms are still ahead of other continental European countries at €430.

The data on Dutch patent attorney firms is currently insufficient to draw conclusions on the development of their hourly rates.

This year’s data once again shows that litigation teams in mixed firms are not succeeding in catching up with pure law firms. This is true for the UK, as well as for Germany and France.

One patent attorney reports that “there is a structural problem. If the same person in the firms decides on the bills for prosecution and litigation work, they are unlikely to accept 50% higher rates in litigation”.

Law firms such as Simmons & Simmons or Heuking may find it easier than patent attorney firms to demand higher hourly rates in litigation. Their clients are already used to such rates. 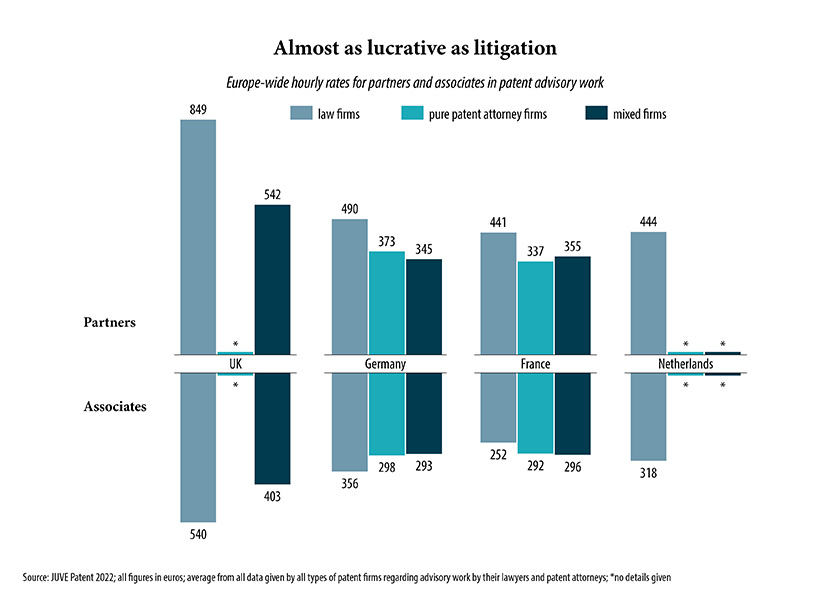 However, the basis for the work is the hourly rates to which clients are already accustomed from prosecution. Very few firms go significantly beyond this in litigation. Instead of making large increases, the firms tend to raise their litigation rates incrementally.

When the Unified Patent Court opens, likely in autumn, patent attorneys and lawyers, German and French, Dutch and Italian patent firms will begin from the same position. Despite its withdrawal, UK law firms are also still hoping to participate somehow, for example via nationally-admitted patent attorneys and lawyers in continental European offices. Another option is via UK lawyers admitted in Ireland.

Experts are sure that, sooner or later, the UPC will create harmonised hourly rates among the patent firms conducting cases at the UPC. Because the German bifurcation system will hardly play a role here, many in the patent community assume that the dominant firms at the UPC will be mixed law firms.

But in the first few years, it is unlikely that patent firms will charge higher hourly rates for UPC cases. This is despite the market predicting that proceedings will be more time-consuming than national infringement proceedings. After all, no-one wants to scare off potential plaintiffs by charging too much in the startup phase.

Therefore, those responsible for the new court decided years ago to charge relatively moderate fees for filing new European patents and for UPC proceedings. These measures are intended to ensure the UPC will be a success.

If this prediction comes true, the UK patent market will come under pressure. So too then will the high hourly rates of London’s patent firms. The latter will only be able to justify their high rates to clients if the London patent courts remain a real counterweight to the continent, and if no coordination work for pan-European patent battles shifts to European patent firms.

After all, a major domain of UK firms is coordination work. This allows them to bill for many expensive partner and associate hours.

In 2021, JUVE Patent asked around 400 IP firms from France, Germany, UK and the Netherlands to provide data on their hourly rates regarding litigation, prosecution and advisory work. All firms are active in the patent field. A total of 74 firms provided data. In some instances, the data was insufficient to provide meaningful conclusions. For example, JUVE Patent received no data from Dutch patent attorney firms.

In 2019, JUVE Patent collected data from patent firms in France, Germany, the UK for the first time. A total of 52 firms submitted data. Since 2020, Dutch firms have also provided data concerning their hourly rates.

JUVE Patent has converted the UK firms’ figures from pounds into euros based on an average exchange rate for 2021.