Since the beginning of 2021, the EPO Boards of Appeal in Munich has conducted three-quarters of its hearings by video conference. This means parties can avoid meetings and travel during the coronavirus pandemic. But in some cases, opposition is mounting to the EPO's new directive to hold video hearings even if it defies the will of the involved parties. 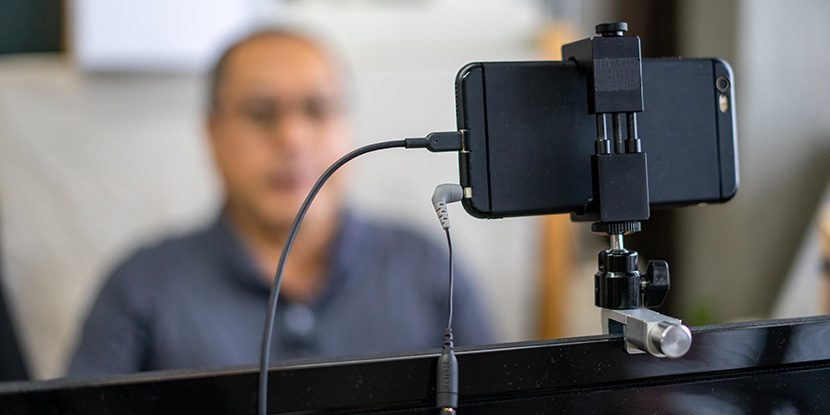 Recording a video hearing is much easier than recording an in-person hearing. But, although both remain prohibited, patent attorneys and the EPO are currently wrestling with the impact illegal recordings could have on parties. This is just one criticism against the EPO’s new compulsory video conferencing legislation ©yoshikaz/ADOBE STOCK

Since January 2021, the EPO Boards of Appeal has held three-quarters of its hearings by video conference. Often, this prevents contact and travel for parties during the ongoing coronavirus pandemic. But some have shown resistance to the new obligation to hold video hearings at the European Patent Office. Now some parties are questioning the legal basis of compulsory hearings. They also ask whether the new requirement satisfies the parties’ right to be heard.

In January 2021, the EPO Boards of Appeal conducted a total of 109 oral hearings. Of these, 84 were via video conference.

As such, the EPO sees video hearings as a way to ensure the protection of participants during the pandemic. However, the EPO was also already pushing video conferencing for hearings as part of its new long-term strategy.

Until now, EPO users and patent attorneys have supported for virtual hearings. This is especially the case in small hearings in the first instance, where only two parties are involved. But, since the EPO enforced the new rule, legal problems have emerged.

Anna Heide, patent attorney at RUHR-IP, says, “The EPO uses well-known platform Zoom for its video hearings. Although Zoom, like other providers, has adapted its data protection standards, many companies still do not allow the use of Zoom”. As such, although other courts use the common platforms Zoom and MS Teams, the platforms face constant criticism of their data protection standards.

Heide also sees other problems. “Technically, it is easy for any participant in a Zoom video conference to film the hearing unnoticed. These illegal films can be used in other jurisdictions such as patent infringement proceedings – especially in the case of expert testimony. The resulting monetary damage to the patent holder, as well as reputational damage to the expert, is inevitable.”

For example, parallel infringement proceedings in the US or UK could be an advantage for one of the parties.

When asked by JUVE Patent, a Boards of Appeal spokesperson saw no problem with the recording hearings. They said, “A violation of the ban on recording hearings cannot (…) be ruled out entirely. However, this is equally impossible in hearings conducted in the physical presence of all parties. Recording devices can be used there unnoticed, too.”

Once again, EPO spokesperson Luis Berenguer Giménez points out that patent attorneys are bound by the professional Code of Conduct. “Members of public attending the oral proceedings via videoconference need to provide their contact details to obtain the link,” he says.

“Thus, even if they attend the oral proceedings in anonymity, we can follow up on any misconduct.”

The strawman opposition function at the EPO is often used in pharmaceutical proceedings. For the strawman and client, public participation in video proceedings presents new opportunities.

This is because the company and its technical experts can join the hearing as interested members of the public. They can then provide instructions to their representative in the negotiation via chat or mail during the negotiation.

This procedure is expressly permitted for other parties and their representatives, to enable communication between the client and the patent attorney. Previously, at in-person hearings, the EPO permitted breaks in order for parties to talk to their clients. This might happen several times over the course of a three-day hearing.

However, during a video conference the EPO permits opening another communication channel such as a virtual chat. This is to ensure the client and patent attorney can communicate in lieu of in-person interaction.

Additionally, even some patent attorneys generally in favour of video hearings criticise that the EPO can now conduct hearings digitally, even if this goes against the will of the parties. A Boards of Appeal spokesperson explained the reason behind this rule to JUVE Patent.

He said, “It is very common for only one of the parties to refuse consent, while the other party wants to move the proceedings forward by means of a virtual hearing. Often, the Boards of Appeal has expressed a preliminary opinion in its written communication in preparation for the oral hearing, suggesting a less favourable outcome for one of the parties than the other”.

Various patent attorneys confirmed to JUVE Patent that this was also their experience.

Thus, the Boards of Appeal is keen to pursue more video hearings. However, sometimes it must contend with a party in the proceedings which is against this. Usually, it is because the party feels the outcome will be less favourable to them if conducted via video.

However, in complex, economically high-stakes cases, the clients tend to discuss more fervently if an in-person hearing is possible. For example, in the dispute over CRISPR patent EP 31 38 910, a video hearing is scheduled to take place from 16 to 18 March. However, both the patent holder and the opponents provided detailed reasons as to why they opposed this.

UK patent attorney firm Greaves Brewster, which represents the patent holder, life sciences company Sigma-Aldrich, reasoned that one of the representatives had recovered from coronavirus, but was still suffering from long-term fatigue. According to Greaves Brewster, this meant the patent attorney could not give a virtual hearing their full attention.

In its written opposition, the party wrote: ‘We hereby request a stay of the opposition proceedings pending the outcome of the referral to the Enlarged Board of Appeal in T1807/15’ (on EP 16 09 239).

Initially, all parties had requested that the EPO hold the hearing in person. However, last week Eisenführ Speiser – which represents BASF in the proceedings – modified this request, agreeing to a video conference. In its reasoning, the opponent pointed out that a video hearing would prevent a further postponement of the proceedings.

Time is running out

In complex cases, Boards of Appeal hearings have around six to ten opponents, and typically last three full days. Therefore, for all parties, staying focused is a challenge.

Furthermore, virtual hearings at the Boards of Appeal take longer than in-person hearings. This is not because the EPO has scheduled more breaks, although parties do consider screen fatigue of participants an issue. Rather, the Board must ask individuals certain questions individually, that they would otherwise answer with a nod. Parties are thus also protesting about time pressure during the hearings, caused by the fact the EPO has not allocated extra time for video hearings.

As participant numbers increase, so too do practical problems with video hearings, such as connection issues. “The likelihood of 40 or more people having a reliable connection for 10+ hours a day, over three days, seems very low,” says Greaves Brewster in its written submission to the EPO.

German patent attorney firm Cohausz & Florack represents one of the opponents in the CRISPR case. The firm also considers hearings via video conference as appropriate, especially during the pandemic.

Natalie Kirchhofer, partner at Cohausz & Florack, says, “We have already had very good experiences with hearings by video. However, a hearing with many opponents via video is very confusing. In very complex cases, it is also difficult to explain the facts as well as in person. This is especially because you don’t have direct eye contact.”

However, a spokesperson for the Boards of Appeal confirmed to JUVE Patent that the Board has not yet submitted the specific questions. When it will decide is unclear. In the meantime, according to Article 112(3) of the European Patent Convention, all other EPO Boards of Appeal boards can decide whether to suspend or continue their proceedings.

Experiences of patent attorneys differ according to the approach of the EPO examiners, and the Boards of Appeal. Both still have discretionary powers and can hold in-person hearings.

A main demand of those criticising video hearings is that examiners, such as the Boards of Appeal, should think carefully about the best method in which to address certain cases. Here, the parties are not criticising video hearings in general; rather, they argue that when a party requests an in-person hearing, the Boards of Appeal should thoroughly discuss its reasoning and present a range of decisions.

It is becoming apparent that video hearings will become standard even after the pandemic. Now, in the patent scene, the discussion centres around how courts and the EPO can optimise video hearings. Particularly in the case of commercially-important patents, all sides take a critical view of their possible disadvantages. Increasing numbers of patent attorneys are questioning whether this movement is legally sound.

Arwed Burrichter, patent attorney at Cohausz & Florack, says, “Overall, the question is whether there is a legal basis for forcing oral hearings via video conference. What happens to the decision if it later turns out that a hearing should not have been conducted virtually, against the will of the parties?”

Update 09.03.2020: The opponents in T1807/15 regarding EP 16 09 239 have withdrawn a request for an Enlarged Board of Appeal referral on video hearing validity. The letter of withdrawal names the main signatory as Thomas Körfer from Mitscherlich. The result could impact the request for stay of proceedings in some cases, including the dispute over EP 910.

As background, in February the Technical Board of Appeal 3.5.02 in case T1807/15 referred a question to the Enlarged Board of Appeal concerning the legality of holding oral proceedings by video conference without both party’s consent. This is because, in the case, the EPO converted the oral proceedings to video conference. The outcome of the case itself was on hold pending the decision of the Enlarged Board.

However, although the opponents have now withdrawn their appeal, the Technical Board could still refer questions to the Enlarged Board. This remains a possibility, especially as the epi (Institute of Professional Representatives before the EPO) is keen for the EPO to answer such questions as soon as possible. The epi has clarified its opposition to the compulsory video measures.