Czech Josef Kratochvíl is the new chairman of the Administrative Council of the European Patent Organisation. The delegates of the EPO's 38 member states met yesterday to elect him as successor to Christoph Ernst.

When will there be harmony at the EPO? ©EPO

Ernst was appointed Vice-President for Directorate General Legal and International Affairs of the EPO in October, with his term set to begin in 2019. Since Ernst’s appointment, the post of chairman of the Administrative Council has been vacant. Kratochvíl had assumed duties temporarily.

Kratochvíl will begin his tenure on 1st January and serve for three years, after which he must stand for re-election by the Administrative Council. Kratochvíl is currently president of the Industrial Property Office of the Czech Republic.

The election took place in Munich at the 158th meeting of the Administrative Council on the 12th and 13th of December.

Ernst had only been chairman since October 2017, taking over from Denmark native Jesper Kongstad. While Ernst was in post, there were considerable disputes between then EPO president Benoît Battistelli and parts of the EPO workforce, and the trade union SUEPO.

Furthermore, lack of separation between the EPO and the Boards of Appeal drew considerable criticism, leading the Administrative Council to implement a structural reform that largely separated the two bodies. 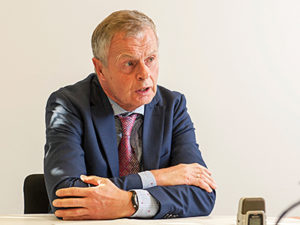 During Ernst’s term the Administrative Council, as the EPO’s supervisory body, increasingly distanced itself from Battistelli, who retired from office in June 2018. His successor António Campinos has since begun to steer the patent authority back into much calmer waters.

Nevertheless, several European patent firms have recently criticised the quality in the patent department and called for countermeasures. Campinos has begun a dialogue with the firms in question, recently calling a second meeting to address concerns.

The new president’s first public statements certainly indicate that the issue of quality is being taken seriously. Precisely what is Campino’s strategy for his first term in office, however, remains to be seen. He is expected to present it to the Administrative Council in June.

Although Kratochvíl is still somewhat unknown among the environs of the EPO, in 2017 Ernst told JUVE Patent what the Administrative Council can expect from Campinos.

“We expect Campinos to resolutely take on the many challenges that the EPO faces and to set out a vision for the future,” Ernst said. “The EPO must continue to work effectively and deliver high quality – while at the same time living up to its public responsibility. It must anticipate an ongoing rise in the number of patent applications made, especially if the EU patent system becomes reality.”

The former chairman of the Administrative Council further added, “Campinos must also ensure that EPO staff uphold high standards of quality when examining patent applications. The issue of quality is a central consideration for the Administrative Council and the Federal Government: patent protection, which in the end produces a monopoly, can only be justified for good patents.”