Haar is an independent municipality on the outskirts of Munich, and current home to the Boards of Appeal of the European Patent Office. But since last week, a dispute between IPCom and patent attorney Jostarndt has called into question whether Haar belongs to the Bavarian capital at all. The Boards of Appeal has referred the question to the Enlarged Boards of Appeal, the highest court instance at the EPO, in a development which once again puts Benoît Battistelli's legacy to the test.

In the summer of 2016, controversial former EPO president Benoît Battistelli, along with the organisation’s 38 member states, decided to largely separate the Boards of Appeal from the EPO. This was due to strong criticism from the European patent community that the court was no longer independent, or immune of influence, from the EPO president – important, given that the Boards of Appeal review decisions made at the EPO.

As a result, since 2016 the Boards of Appeal has been run by its own president, who exercises a high degree of self-administration

And at the end of 2017, as part of the new measures the court and its employees moved to Haar from the EPO main building in Munich. In many public commentaries, and in interviews with JUVE Patent, employees of the Boards of Appeal saw the move as a disciplinary action by Battistelli.

However, now the Enlarged Board of Appeal has the power to review this measure. Within the context of Articles 6 and 15 of the European Patent Convention, a new the question has arisen. Does Haar belong to Munich or not?

The query was initially raised by Aachen patent attorney Hans-Dieter Jostarndt, following objections raised by third parties in the granting procedure of EP 2378 735, which belongs to NPE IPCom. The patent protects a technology for operating a mobile phone network.

The patent was granted, despite an objection on the grounds of lack of clarity, a decision Jostarndt then appealed to the Boards of Appeal. In the course of the proceedings, Jostarndt requested that an oral hearing scheduled for 25 January be moved to the seat of the EPO in Munich because “Haar is obviously not intended in the EPC as a place for acts and negotiations.”

Of course, this might also pertain to whether Munich means the city itself, a particular region, or the county of Munich, to which Haar belongs.

What is a secondary argument in the patent dispute could now have far-reaching consequences for the EPO court and its associated appeal procedures.

Observers believe that one consequence could be that defeated parties will want to delay a final decision in appeal proceedings by disputing Haar as the place of the oral hearing. 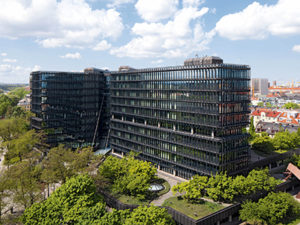 Boards of Appeal – back to Munich?

Following the current decision, all proceedings where this issue is raised should be suspended until final clarification by the Enlarged Board of Appeal.

If the highest instance of the EPO court decides that Haar is not Munich, the court may have to move back to the EPO’s main building. According to Munich patent attorneys, this would be convenient for many judges.

Another solution would be a complex modification of the EPC. This would require a diplomatic conference, which the 38 member states avoided in 2016 through the partial separation of the court from the office.

The case which has led to such far-reaching consequences is just one of many in IPCom’s patent processes, to force the mobile industry to take a licence on the NPE’s patents.

In 2008, for example, the NPE of Munich-based patent attorney Bernhard Frohwitter engaged Nokia in a large series of disputes. In the following years, IPCom also filed disputes against Deutsche Telekom and Vodafone, among others.