Dead end with no way out

Originators do not believe there is a Europe-wide solution to the urgent problem of off-label use of generic pharmaceuticals. The interests of those involved in national health care, also at EU level, are too conflicting. Companies are therefore relying above all on detailed solutions: clearer rules, for example, for package inserts, for the discounting of medicines, or greater harmonisation at European level. This is where many companies’ greatest hopes lie – in the Unified Patent Court, of all things. 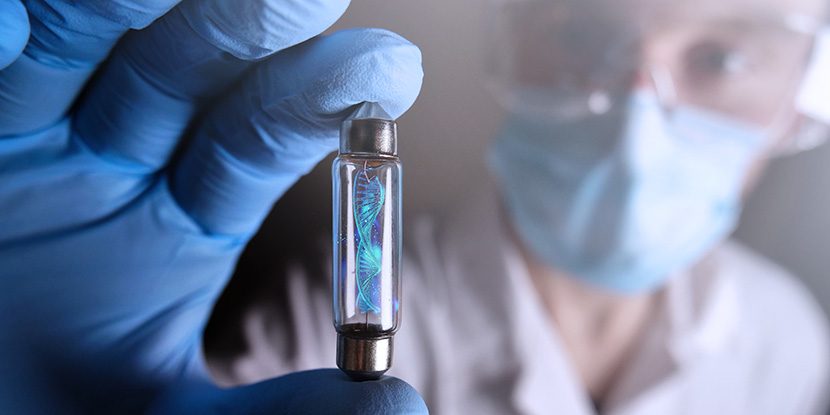 “I don’t see any comprehensive solution to the multitude of problems enforcing second medical use claims,” one in-house counsel says. “Time and again there have been attempts at change. But, ultimately, national legislators struggle to change anything at all.”

Especially in Germany, the situation seems very stuck. “There is no regulation by the German legislator in sight, as the interests of those involved in the health system conflict,” says Wolfgang Kellenter.

It seems difficult enough to reconcile the need to save -money with the interests of health insurance funds, doctors, pharmacists and patients. Balancing the conflicting interests in the pharma industry is practically hopeless. “We must not forget that many original manufacturers also have generic divisions,” says an in-house counsel. “The situation is very hazy.”

“It is not easy for the legislator to regulate everything precisely, down to the last detail,” says Bernhard Arnold. “I do not see any generally applicable solution to the current problems in, for example, off-label use. We will have to live with grey areas where it depends on the individual situation.”

“If the legislator wants better regulation it will have to bite the bullet. Either it decides more clearly in favour of the holder’s property right or it gives priority to equally weighty arguments for a more social law approach,” says one judge.

Norway is one example of how things can be done differently, explains Dorian Immler. “There, the exact indication is noted on the prescription. A nationwide computer system then shows pharmacies precisely whether an indication is patent-protected or whether the property right for this exact use has expired.”

But with regard to Germany, Christian Stallberg says, “The easiest solution would be for the legislator to change the aut idem regulation. What is missing is a reference in Section 129 of the German Social Code that makes it clear that pharmacies may not substitute a product for a generic if the indication is still protected by a second medical use patent.”

This is also where the in-house counsel from a large European pharmaceutical company sees the starting point. “If patent protection exists, doctors must be allowed to apply the aut idem regulation to the prescription without fear of being held liable for exceeding the budget.” They believe a limitation of recourse is the silver bullet. “For indications where there is patent protection, liability has to go, but only there.”

A solution to the second medical use dilemma via social law aspects at European level seems even further away. “Large countries like Germany are resisting transferring social law authorities to the EU. They want to avoid any interference by smaller EU states in their national health care systems,” one in-house counsel observes.

According to the pharmaceutical research industry, the economic and patient-oriented consequences of not having effective incentives to develop second medical use innovations can be seen in the example of US companies. “There is the risk of US pharma companies not even marketing certain medicines in Europe because they are not granted market exclusivity for them,” says Immler from Bayer.

One example of this is Biogen’s multiple sclerosis drug tecfidera. The active substance dimethyl fumarate was initially developed for the treatment of psoriasis. Biogen then developed its use as an MS drug and gained protection via a second medical use claim.

Biogen requested a further ten years of data exclusivity from the European Medicines Agency for the European market. Only when this was granted did the US company launch Tecfidera as an MS drug in Europe. In addition, Biogen and Forward Pharma fought in Europe over the question of who invented it. The dispute was settled in 2017.

Doing it the Swiss way

Switzerland is an example of success via the path of marketing authorisations. Here, in contrast to the European Union, parallel approvals for different indications of the same active ingredient are possible, as the example of the Novartis blockbuster Glivec shows. The cancer drug with the active ingredient imatinib has been approved since 2001, primarily for the treatment of chronic leukaemia.

However, Novartis excluded the indication for the treatment of certain types of gastrointestinal stromal tumours (GIST), instead receiving a second approval for this in 2002. The company then marketed this indication under the brand name “Glivec GIST.”

After patent protection for the active ingredient patent -expired at the end of 2016, generic preparations for the -indications no longer protected by the patent came onto the market.

But the route of double approval cannot be taken with the EU Commission, claim several pharmaceutical companies. 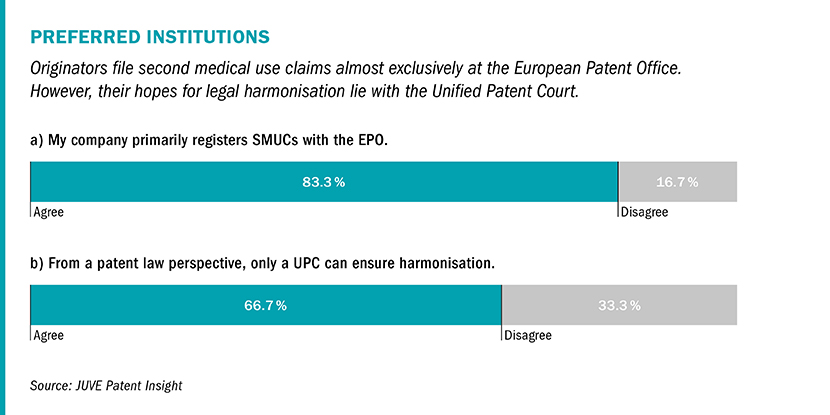 UPC a beacon of hope

Given the inconsistent case law in the European civil courts, one judge says a referral to the European Court of Justice could ensure harmonisation.

The CJEU does indeed play a harmonising role in the pharmaceutical sector. “It certainly helps with SPCs but has not helped with second medical use claims so far,” an in-house counsel says. Another disadvantage is that it has no direct impact on case law in Switzerland and the UK.

The same now goes for the Unified Patent Court. Since Brexit last year, the UK is no longer participating in the UPC. Switzerland is also not a contracting state.

Nevertheless, most in-house counsel surveyed by JUVE Patent agree that the UPC could lead to a harmonisation of case law in second medical use claims. The only problem is that its launch remains uncertain due to a second complaint to the German Constitutional Court.

The UPC is the appropriate instrument for cross-border patent protection, say several in-house counsels, provided that there are first-class judges on the bench.

Bringing the best and most experienced patent judges from the member states to the UPC is also the declared aim of the UPC officials. But the UPC will now have to go without the UK judges, who are highly-experienced in pharmaceutical cases.

Even after the UPC launch, however, the basis for dedicated case law on second medical use claims would be lacking for the time being. “It would take years for the UPC to build up appropriate case law,” says one in-house counsel.

Wolfgang Kellenter, for example, considers the fulvestrant case an ideal one for the UPC. “The UPC would have been the appropriate forum. Moreover, its rules of procedure would offer originators greater opportunities to preserve evidence than, for example, in Germany.”

One in-house counsel considers the UPC ill-suited to hear second medical use cases from a social law perspective. “In terms of patent law, it will ensure harmonisation, without a doubt. But the cases mainly take place within social law, and how are the UPC judges supposed to keep an eye on the vastly differing carve-out situations in 25 states?”

On the one hand, pharmaceutical research companies are generally very enthusiastic about the UPC. The possibility of enforcing their property rights in one central lawsuit in Europe is tempting. On the other hand, scepticism is widespread, because a central counter-attack by the generics industry could destroy important property rights for the whole of Europe.

As the court’s launch is not in sight, one in-house counsel is calling for more collaboration and communication among judges in Europe on second medical use issues. One judge would also like to see more research and scientific discussion on second medical use claims. “There is practically no communication between social and patent law at universities,” he says. However, there is still a lot of research to be done, such as how to prove infringement following the new fulvestrant case law in Germany.

“What data is available in the health care system to shed light on whether generic products are prescribed off-label for second medical use applications? And how can it be used as evidence in a legal dispute?” the judge asks.

“As an originator, you simply have to accept that there are differences in national law in Europe,” one in-house counsel says in a resigned way.

Another in-house counsel says, “As a pharmaceutical manufacturer, you have to be familiar with the patent and social law conditions in each country. This is costly, but it often offers new opportunities.” The system is constantly in motion, and not always to the disadvantage of originators. “In France, a judge who tended to rule against patent holders has recently retired. Her successor is much more open-minded to our concerns,” he says. (Co-author: Konstanze Richter)