Pharmaceutical research companies in Europe hold second medical use claims in high regard and are busy filing them at the European Patent Office. Their economic importance, however, could be higher. These were the findings of JUVE Patent’s research among leading pharmaceutical manufacturers, which market medicines protected by such claims less frequently than there is potential to do. Above all, the difficulties to enforce such claims against generic products are making pharmaceutical research companies hesitate. They are calling for new social law regulations. But they also count on harmonisation coming from a future Unified Patent Court. 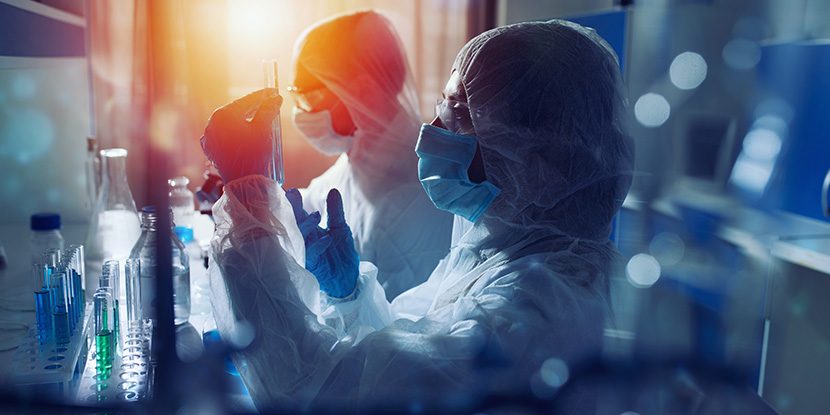 Pfizer landed a coup in 1998 with the blockbuster Viagra. The US company was the first pharma manufacturer to market a drug for the treatment of erectile dysfunction. Few patients knew that the active substance in Viagra, sildenafil, was originally developed to treat high blood pressure and angina pectoris.

Almost exactly 100 years earlier, Bayer had launched Aspirin, a drug for the treatment of fever and headaches. Today, the active substance acetylsalicylic acid is also used to prevent heart attacks and strokes.

Aspirin and Viagra are some of the best-known examples of new medical uses being developed for known active substances. The substances have been tested for safety, after all, and possible side effects are already established.

Some manufacturers report that they used to file second medical use claims more frequently in the past. But they have changed their strategy. Today, says an in-house counsel, many more indications are written into the applications for substance patents. “This, of course, limits the possibilities when it comes to filing second medical use patents later on.” 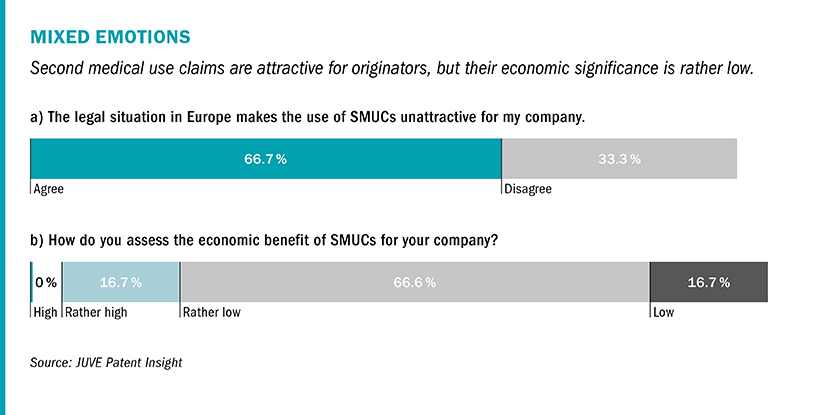 Dorian Immler, Head of Patents Pharma & Consumer Health at Bayer, says, “There is huge potential for real innovation in second medical use claims.” This was confirmed by all in-house representatives who spoke to JUVE Patent for this report. “But,” Immler says, “unfortunately, their actual value can rarely be tapped in business.” (Read full interview)

Although most originators surveyed by JUVE Patent file second medical use claims quite actively, it is not known how many such claims are filed generally in Europe. At the request of JUVE Patent, a spokesperson for the EPO stated that these are not specifically recorded.

The in-house counsel of a mid-sized originator says, “If there were a right to exclusivity in second medical use claims, their economic importance would be significantly higher.”

Pharmaceutical research companies agree that so far, second medical use claims have been very difficult to enforce. If the patent for the active substance has expired and there are generics on the market, these are often also used for the further indication protected by a second medical use patent, many times “off-label” or “cross-label”. Originators taking legal action against this practice have had little success to date.

In a landmark decision in 2018, for example, the UK Supreme Court dismissed Warner-Lambert’s infringement suit against Mylan and Actavis concerning second medical use of the drug Lyrica for the treatment of neuropathic pain (case IDs: UKSC 2016/0197, 2017/0069 and 2017/0078). 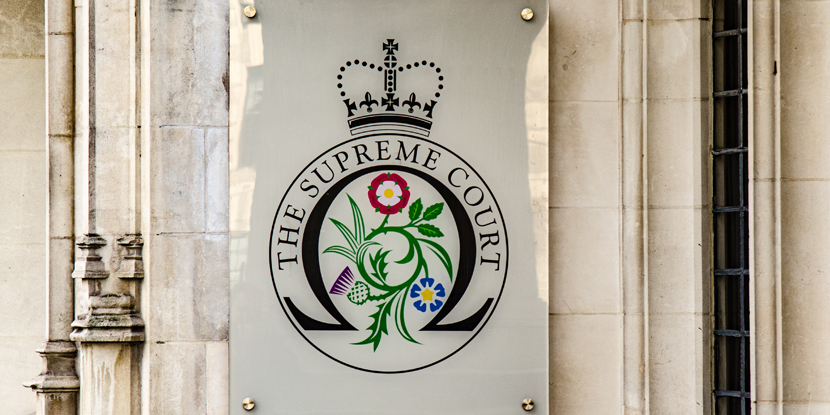 In 2019, the UK Supreme Court dismissed Warner-Lambert’s infringement suit against Mylan and Actavis concerning second medical use of the drug Lyrica. ©William/ADOBE STOCK

In Germany, AstraZeneca was defeated by several generic manufacturers in the dispute over its cancer drug fulvestrant before the Higher Regional Court Düsseldorf. The reason? The court found the proportion of provable cases in which the generics were used for patent-infringing cross-label use insufficient to rule against the defendant (case ID: I 2 U 27/18).

However, the second Civil Chamber of the Düsseldorf court used the dispute as an opportunity to make manufacturers of generic drugs more accountable in the future. In its decision, the court called on them to be more active in preventing so-called off-label use.

Christian Stallberg, health law expert from Düsseldorf-based law firm Novacos, says, “The court held that patent infringement can even exist if there is no ‘purposeful preparation’ (in German: ‘sinnfällige Herrichtung’) – in other words if, for example, the protected indication itself is not listed in the package insert and the summary of product characteristics, but the generic manufacturer makes use of other circumstances.”(Read full interview).

The situation in Germany, Europe’s largest market for pharmaceuticals, is unique. Even if generic manufacturers deliberately do not market their product for protected use, they often profit from the fact that health insurance funds must save money.

The health insurance funds put discount agreements for individual active substances out for tender for this purpose. The cheapest supplier – usually a generic company – is awarded the contract by the health insurance fund. The pharmacist then has to dispense the products of this supplier to patients. If there is no discount agreement, German social law stipulates that the pharmacy must dispense one of the four cheapest medicines with the required active substance. The original products are not usually among these. This rule is also known as the “4G rule,” with similar regulations existing in other EU countries.

Only the doctor can prevent this by explicitly prescribing the original drug and not just the active substance it contains. At the same time, the doctor must specifically rule out substitution by a generic drug. Christian Stallberg says, “But this is the exception rather than the rule because social health insurance-accredited doctors are also subject to the efficiency principle. Often, they do not dare to prescribe the more expensive original for fear of being held liable for overspending by the health insurance funds.”

This “off-label use” – the use of a generic drug for a second medical use for which it is not approved or which the generic company carved out of its label – is also difficult to prove in court, clearly shown in the fulvestrant case. If the originator takes legal action, it must prove how often off-label use occurs and how high the resulting damage is. Moreover, if the generic manufacturer does not mention the patent-protected second medical use claim in the summary of product characteristics – and is therefore not guilty of the ‘purposeful preparation’ –, it cannot be held liable for what health insurers, doctors or pharmacists do.

One in-house counsel complains that the 4G rule in Germany is an invitation to infringe patents. Representatives from pharmaceutical research companies agree that generic manufacturers simply profit from the prevailing practice. As a result, originators are losing out on high revenues, they say. This is because second medical use claims have great economic potential and in no other industry is the importance of individual patents higher than in the pharmaceutical sector.

Originators complain that the possibilities to enforce a second medical use patent are severely limited compared to an active substance patent, not only in Germany but also throughout Europe. This is another reason why originators market fewer products protected by second medical use claims. They also criticise inconsistencies between the individual European states as further complicating the situation.

On the other hand, originators are often accused of “evergreening”. In other words, extending patent protection by filing patents for additional fields of application. In the experience of the companies we interviewed, this practice is criticised not only by generic manufacturers but also by judges.

Pharmaceutical research companies, however, counter this by pointing out that research costs for second medical use products are almost as high as for new active substances. Second medical use claims are already viewed with scepticism for medicines; manufacturers of medical devices or hygiene products encounter even more problems in this regard. In the opinion of the manufacturers, active substances in such products have the potential for further use patents. But then the major hurdle is the granting of the claims in the first place.

Roland Brem is responsible for the dental division in Europe in the patent department of 3M. He says, “Not everyone at the European Patent Office seems to be aware that second medical use claims also exist outside the classical field of medicines. Most of the time, examiners reject such claims on formal grounds. The question of novelty and inventive step is not even asked.”

On the other hand, for most pharmaceutical research companies, the EPO’s examination and appeal departments are still a place of bliss. The real problems start when it comes to enforcing the claims in the civil courts. (Co-author: Konstanze Richter)

Read what originators claim politicians can do to solve the enforcement problem, and the UPC’s unexpected comeback, in part three: Dead end with no way out