A survey conducted by JUVE Patent has found that patent professionals across Europe are using video conferencing as an alternative to in-person court hearings. Some respondents are concerned that intimacy and confidentiality are being compromised. On the other hand, the use of video technology during the coronavirus pandemic could result in it becoming an integral part of court proceedings in the long term. 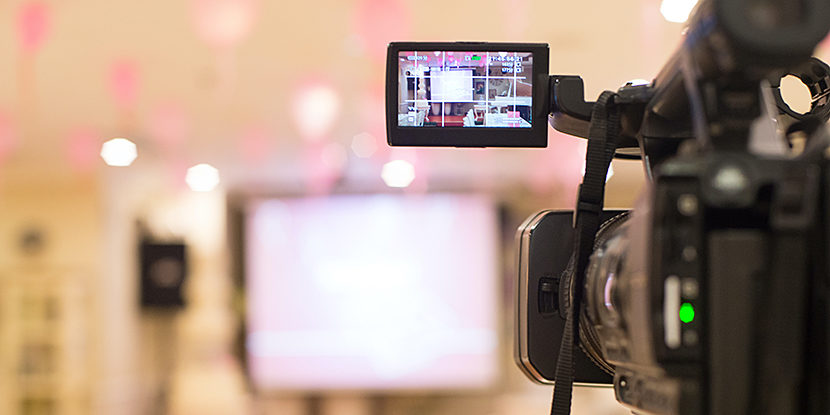 Coronavirus means the European courts having to adapt to new ways, despite historic reluctance. Many patent lawyers are happy with the changes, although others express concern about video conferencing as a long-term alternative to hearings ©victor217/ADOBE STOCK

A recent study conducted by JUVE Patent examines the functionality of video conferencing in patent cases, and video software as a viable long-term solution. In the online survey, 229 individuals in the international community reacted to the statement, “My experience of hearings using video conferencing tools during the corona crisis has been positive.”

Of those who responded saying they had experienced online tools, the outcome was overwhelmingly positive. However, 46.3% of respondents have so far had no experience with such video conferencing.Yet almost 91% disagreed with the statement, “In the future, European patent courts should conduct oral hearings exclusively using such video conferencing tools.” 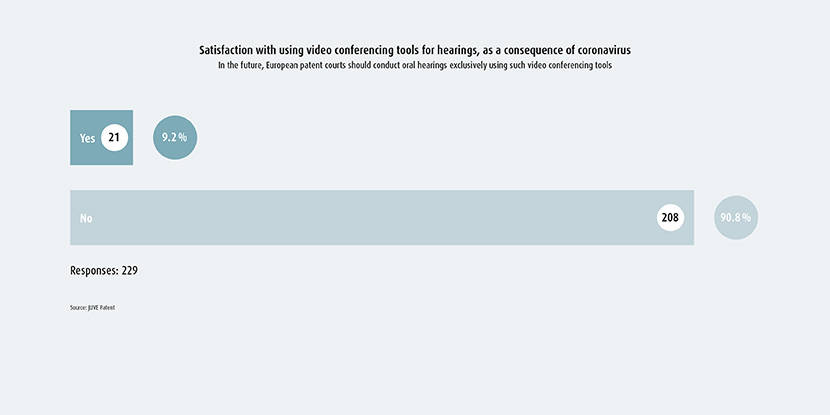 The response to the statement, “In future, European patent courts should offer oral hearings as a mix of physical presence in the courtroom and video conferencing” was more mixed. Here, just under 70% agreed with the statement, while just over 30% disagreed.

The use of video conferencing varies throughout Europe. However, when looking at the general trends, the breakdown in location of respondents is not surprising. Aside from factoring in the level of reach in these jurisdictions, courts in the UK and Germany are readily adapting to the challenges of video software conferencing technology.

Even in the Netherlands, despite the courts’ historic resistance against video conferencing methods for hearings, in the middle of April the judges at the Regional Court of The Hague heard an online hearing for the first time.

In fact, on 22 April the Regional Court at The Hague dared to go a different way. Using online chat in a hearing which lasted four hours, the court negotiated the technical part of a Sisvel lawsuit against BKK, Oppo, OnePlus and Wiko (case ID: C/09/578930). Lawyers from all companies involved emphasised to JUVE Patent that the experiment was a success.

Since then, the Dutch courts have undertaken several hearings and handing-down of judgments via video link, most recently in the high-profile Supreme Court battle between Fresenius and Eli Lilly over pemetrexed.

However, in France the courts have still not taken the steps towards adopting video conferencing as an accepted method of patent hearing. While from the offset the French courts adopted video hearings in urgent cases, for IP the courts simply extended many procedural deadlines. Towards the beginning of the coronavirus pandemic, one French lawyer told JUVE Patent, “It’s a pity since video hearings would help IP lawyers and specialised judges to keep justice moving in lockdown.”

The lawyer says, “Not being able to move courts online will create a massive backlog of cases that could affect our clients since the issuance of numerous decisions will be delayed.” Three months on, the courts still have not worked at their usual capacity. No French lawyers have even confirmed that any judgments have been received in this time.

In contrast, in Germany, the courts are making regular hearings. In fact, some courts are rushing in order to avoid this backlog.

However, the UK’s openness to video conferencing tools is markedly different. A recent example is on 3 July 2020, where the UK patent courts heard three oral proceedings. High Court judge Paul Morgan heard the first proceedings via Zoom, in a case between Lufthansa and Astronics, and Lufthansa and Panasonic. High Court judge Colin Birss presided over the second hearing, between Edwards Lifesciences and Meril, via Skype. Finally, deputy judge Richard Meade heard a case between Merck Sharp and Dohme against Wyeth using emerging video conference platform, Sparq.

This time last year, it was unfathomable that three different patent court cases in the UK would occur almost simultaneously. Furthermore, all three cases used different types of video conferencing system to engage their legal counsel and clients.

A partner at a London firm says, “Traditionally, June and July is the busiest time of the year. It’s crucial for the courts to keep on top of all the cases, and it seems the judges are readily adapting to the new influx of technology.”

Furthermore, the preference for which platform varies according to the individual and the institution. Skype seems to be much more common than other platforms such as Zoom. In fact, UK lawyers note that Skype is the judges’ video software platform of choice. However, another UK lawyer notes that this is probably down to Skype being an early leader in the video conferencing market.

Anecdotally, German courts also seem to use Skype more often than other video conferencing tools. Still others favour Teams as an effective method to connect parties across borders. It is also not uncommon for one set of proceedings to use multiple platforms. 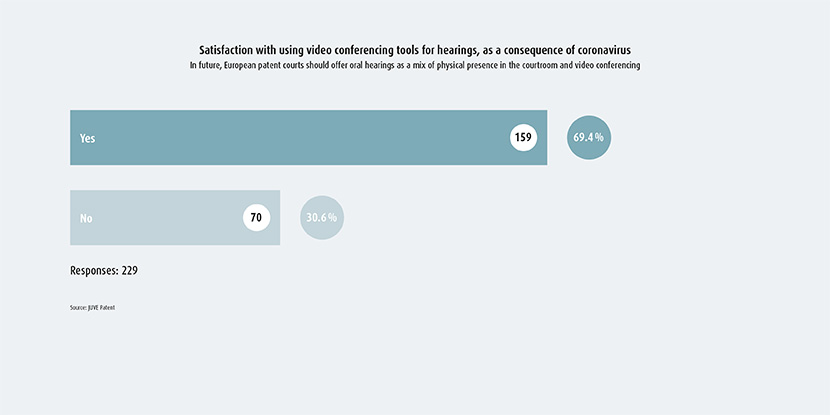 In future, European patent courts should offer oral hearings as a mix of phyiscal presence in the courtroom and video conferencing ©JUVE Patent

On the other hand, variation in software can cause undue stress between parties. This is especially true for parallel litigation proceedings involving multiple jurisdictions. “All relevant European institutions should agree on one common standard for video-conferencing,” says a respondent. “It is very burdensome that each provider has different prerequisites, different user interfaces and different options.”

In Germany, the picture is a little different. In German hearings, the German Federal Court of Justice in Karlsruhe is a pioneer in the use of video technology in hearings. Here, the judges are partly responsible for the technology. Like in the UK, German judges can request or specify the type of system they would like to be used.

Early on, during preliminary hearings, the Munich Regional Court regularly handled cases via video software. Lawyers remain enthusiastic about this, albeit to varying degrees. Criticism mostly stems from lawyers feeling that, if they had been there in person, negative decisions against their party could have been more easily preventable. Many lawyers also point out that video hearings are a very efficient way to handle certain aspects of the case.

But for the most important pleadings and discussion over core issues, nearly everyone prefers hearings in person. This is mainly because the lawyers can better see the reaction of judges during arguments. However, for clients, video conferencing is a great opportunity to take part in these often obscure hearings.

But how sustainable video conferencing methods can be in the long term is something that remains to be seen. Some respondents criticise the lack of anonymity afforded to the legal counsel and clients. This is especially true by Skype, which notes the participant’s name. While there are ways around this, for example using proxy servers, this too carries its own security risks.

“Mediations and arbitrations still need to be highly confidential,” notes a respondent. Some lawyers worry that video conferencing software does not afford the same level of security of a closed courtroom. Others still worry that it is only a matter of time before the courts experience a confidentiality breach.

This is to say nothing of the case management software necessary to file vast quantities of procedural documents. One laywer told JUVE Patent, “The UK courts still use hard copies for lots of trials. The electronic document management system is improving, but it’s still not that effective.”

The JUVE Patent survey also highlights a disconnect between participating in online proceedings, and the natural rapport built via physical contact. Some lawyers express worry that the reliance on online interaction could negatively impact the outcome for their clients.

One respondent said, “Oral physical hearings are necessary to understand all the intricacies of the chamber.” Another respondent notes, “The necessary human interaction between the parties involved cannot be obtained during video conferencing.”

Particularly for barristers in the UK, and patent attorneys in Germany, the physical interaction with the litigating lawyers and parties is crucial. On the other hand, what is effectively a new layout affords the opportunity for a new perspective on the courtroom. A patent lawyer told JUVE Patent, “In the UK, usually the barristers are at the front, interacting with the judges. But now we can see their faces and how they interacted with the judges first-hand.”

Sometimes, such interaction can mean the difference between winning and losing a case before a judge. But, on the other hand, there are also multiple practicalities involved in ensuring all necessary people are in the correct place and the correct time.

One practitioner notes, “It is not necessary to be at the court room or at the EPO in person. [Remote hearings] have a positive impact on the costs for the client, as well as on the performance of the lawyer.” Many respondents, even those keen to see court hearings return to ‘normal’, commented that video conferencing is helping drive down the overall cost of litigation. For example, one respondent notes, “Saves on travelling costs and time, although video conferences do reduce the human interaction.”

Most parties attach great importance to at least two representatives sitting opposite the judges in the courtroom. But beyond this most obvious hurdle, video technology offers many possibilities. Legal counsel can bring in clients from abroad. Interpreters can work completely remotely. The environmental impact from taking fewer flights for a hearing which lasts just a few hours also cannot be overstated.

However, the devil is in the detail. Firstly, video software hearings whereby parties and judges work from home is neither achievable in the near future, nor ideal as a long term solution. Rather, courts and legal counsel are testing different versions, as the UK patent courts diary exemplifies. However, some IP courts such as in France take more of a ‘wait and see’ approach. As French judges deal with the case backlog, perhaps French patent litigation will find a new way forward in case of a second coronavirus wave.

Although the experience of the lawyers has so far been varied, following four months of the coronavirus pandemic one thing has become clear. More innovation than previously thought is now possible. As one respondent notes, “I am impressed with the flexibility that all sides have shown. Things that you would have thought would take years to implement in terms of paperless offices and video conferencing hearings were all of a sudden made possible without too much ado.”

If nothing else, video technology can help in the day-to-day running of hearings. In the future, it could even become an accepted method for preliminary trials. It seems the community certainly has an appetite for change.

The remaining 15% of respondents worked, variably, in China, the US and what JUVE Patent categorised as ‘other’, e.g. not the main jurisdictions covered by the publication. The ‘other’ category includes a mixture of representation from Italy, Switzerland, Finland, Austria, Canada, Ireland, Hungary, Sweden, Belgium, Korea, Denmark, Turkey, Czech Republic, Slovakia and Japan. (Co-author: Christina Schulze)