When it comes to patent litigation, the leading IP boutiques across Europe are fierce rivals to the internationally integrated firms. National market leaders such as August Debouzy, Brinkhof, Bristows and Bardehle Pagenberg compete with large international patent teams for the outstanding cases in their jurisdiction. Read our in-depth analysis of the nine leading boutiques and their European strategies. 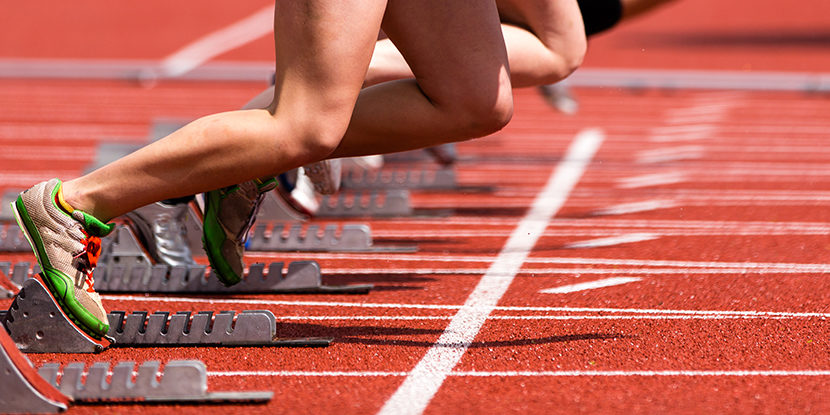 European presence and strategy: The IP practice of this national full-service firm is among the market leaders in the French patent litigation market. It has no offering in other European countries but remains strong representing some international clients in cross-border disputes, such as Huawei and Asus. The team has a good reputation for electronic and mobile communications disputes, as well as for pharma cases. 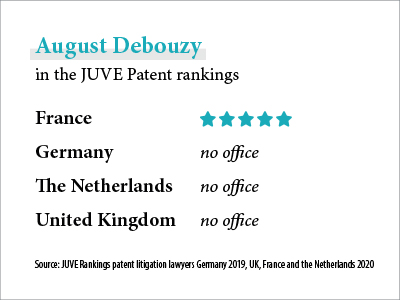 Two dual-qualified partners frequently represent their clients before both the national French courts and the EPO. If the UPC arrives, this experience will be a trump card that few other European firms can play. This makes August Debouzy an interesting partner for lots of international firms, especially those with a similar full-service approach.

But as part of a national full-service law firm, the patent team is more limited in its opportunities for close cooperation than pure IP boutiques.

European patent team size: 2 partners, 3 counsel, 10 associates (7 of whom are dual-qualified as patent attorneys and litigators)

European presence and strategy: Bardehle is on its way to becoming a top European firm. In Germany, this mixed IP firm remains a market leader in both patent litigation and filing. The firm recently strengthened its Düsseldorf office with a lateral hire who brings experience in SEP disputes. The Paris patent litigation team is well positioned in France and best known for its vast experience litigating for NPEs, such as IPCom. The German team is not active for IPCom but handles a major dispute for NPE Intellectual Ventures. 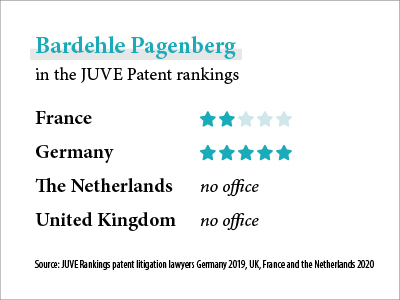 Bardehle has a mixed litigation approach, internationally-oriented lawyers and offices at the key UPC venues of Düsseldorf, Munich and Paris. It also has a small Italian office in Verona, although no office in London. Currently, due to the uncertainty surrounding the UPC, there seems to be no plans to boost its presence in London.

However, if the court launches without the UK, it could be worth the firm considering an office in Amsterdam due to its focus on mobile communications.

European presence and strategy: This IP boutique is a market leader for patent disputes in the Netherlands. The firm brought onboard litigation-experienced patent attorney Koen Bijvank three years ago, a step towards transformation into a mixed practice. This experiment has more than paid off. Bijvank has an excellent reputation for both EPO cases and proceedings before the Dutch patent courts. 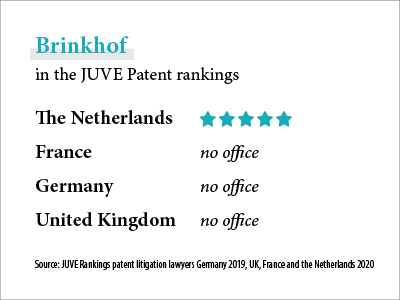 Brinkhof is also highly respected in the European patent community. The firm has good relationships to numerous European patent firms. Brinkhof is also involved in a close relationship with UK market leader Bristows and mixed German firm Vossius & Partner. This connection was supposed to result in a strong alliance – or, as speculated by outsiders, potentially even an integrated firm for UPC cases. But given further UPC uncertainty, Brinkhof has reverted to its stand-alone strategy. Nevertheless, it still enjoys a close relationship to Bristows and Vossius.

With its pan-European litigation for Heineken, Brinkhof demonstrated that close alliances with other boutique firms can pay off without sacrificing independence. Vossius and Brinkhof also work side by side for Wiko. Such cooperation offers a credible alternative to the integrated practices of Hoyng ROKH Monégier or Hogan Lovells.

European presence and strategy: This market-leading London patent-litigation practice continues its impressive development by retaining a raft of big-name clients in both telecommunications and pharmaceuticals disputes. 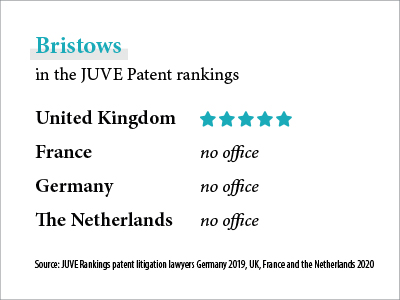 As a London-based firm, Bristows might seem limited in its European reach. But its UK team often coordinates parallel proceedings across the continent. So far, this strategy is so effective that it has won the firm instructions away from the London courts. In some cases, such as for Heineken, the firm is running proceedings in Germany and the Netherlands alongside Vossius and Brinkhof. Bristows is well-known for having strong relationships to both firms. This relationship was supposed to lead to even closer cooperation in the event of a UPC.

But now, with the UK no longer part of the UPC and the patent court still uncertain, the three firms are concentrating on their stand-alone practices. Bristows now lacks direct access to the new patent system. Perhaps the firm will look for new alliances with other European patent firms.

European presence and strategy: This Düsseldorf IP firm is one of the most active litigation outfits in Düsseldorf and among the German market leaders. The firm has a strong footprint in SEP and FRAND cases, acting mainly for patent pools and NPEs. On the other hand, when it comes to connected cars disputes, the firm is active for industry companies such as VW and some suppliers. 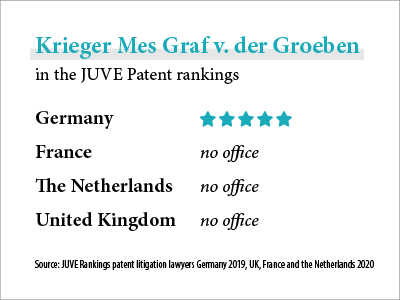 For a long time, the boutique has taken a wait-and-see approach to the potential UPC launch. Now, with the future of the court still uncertain, Krieger Mes has ruled out a merger with European firms. Instead, it counts on non-exclusive cooperation. This may limit its opportunities in cross-border proceedings.

Therefore, the firm must rely entirely on the huge appeal of its lawyers. Compared to other German boutiques, Krieger Mes is still seen less often in cross-border disputes.

European presence and strategy: The London boutique is universally regarded as a market leader in the UK. It has a remarkable reputation for its litigation work, both at the UK courts and in major international disputes. For the latter, the firm often plays a coordinating role. 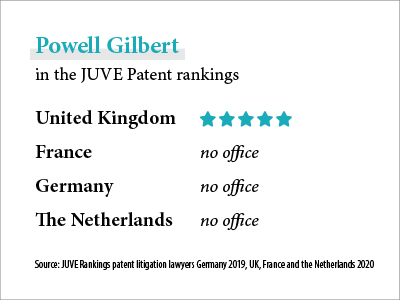 The boutique is proud of its independent status. It relies on its strong relationships to other leading patent firms across Europe. Strong relations to US firms have allowed Powell Gilbert to specialise in pan-European coordination of cases for US clients.

Whether the firm will maintain this at such a high level after Brexit is a major strategic question.

Powell Gilbert emphasises that its leading role in coordination work grows organically out of its client relationships for work in the UK. Thus, such work is based on its technical and legal expertise with the international coordination work as added value. Depending on how the UK market and the role of UK courts develops over the next few years, Powell Gilbert may be forced into doing work which it has viewed as intellectually unattractive, i.e. European litigation with no UK proceedings, but where Powell Gilbert maintains a primary client contact to a mostly US client base.

If the UPC starts without the UK, Powell Gilbert’s major challenge will be how to ensure substantial knowledge in UPC law without direct access to the European patent court.

European presence and strategy: Once again, the German team of this US firm confirms its status as a leading outfit in German patent litigation. In other European countries, Quinn Emanuel has no team which matches its German office in terms of visibility and size. 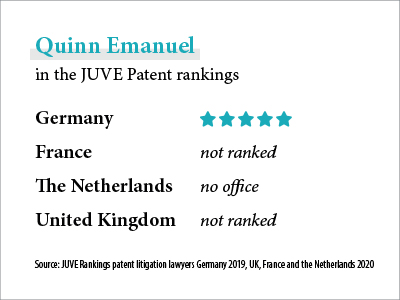 The major battle between Qualcomm and Apple illustrates how well Quinn Emanuel transfers major cases across the Atlantic, in order to try them before the German courts. As an exceptionally strong litigation practice in Mannheim and Munich, and with a good presence at the Düsseldorf patent court, Quinn Emanuel is well-prepared for such battles. This is as well as for a potential UPC launch. Additionally, the US firm has German offices in Hamburg and Stuttgart.

The firm has chosen not to have a comparably strong patents team in Paris. However, Quinn Emanuel recently strengthened its presence in London with a senior associate hire from Bird & Bird. Nevertheless, its strategy is based on partner Marcus Grosch’s extremely strong visibility, and its preeminent US practice. Most competitors are not convinced that this strategy will suffice to match up to Hogan Lovells or Bird & Bird in the assignment of cross-border cases.

European presence and strategy: This Düsseldorf law firm is part of the wider group of market leaders in German patent litigation. It conducts infringement and nullity suits primarily for clients in the pharma, biotech and mobile communications sectors. 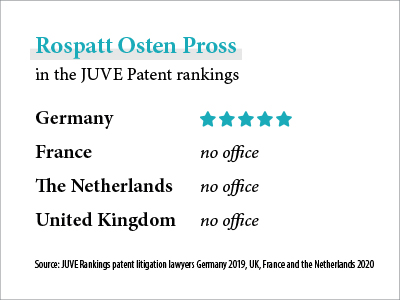 The boutique is banking on its independence and close contacts in European litigation firms. Consolidating its good connections to UK firms Bristows and Powell Gilbert would be a good move, especially if the UPC should enter into force at one stage. Both these UK boutiques are being wooed by other German firms.

European presence and strategy: This IP firm remains one of the most active litigation outfits in Düsseldorf and therefore a German market leader. With its expertise in SEP suits, Wildanger has gained a good foothold in international cases. But it is also present in German litigation for some cross-border life sciences disputes. 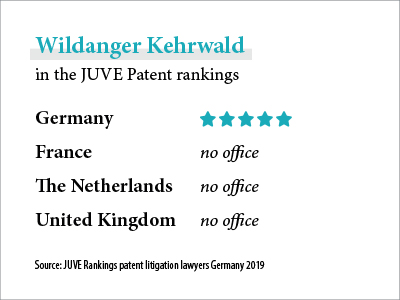 The boutique is banking on its independence and close cooperation with European litigation firms, alhough some outfits are being wooed by its German competitors. In order to handle more major proceedings, as well as to prepare for a potential UPC, Wildanger must consolidate its partnerships in European litigation. On a positive note, the partnership is constantly growing. The partners work on complex instructions in teams more regularly than other German boutiques.

JUVE Patent published patent rankings in all of the following countries for the first time in 2019/2020:

All information on the law firms presented in this article refers exclusively to their position and analysis in these four rankings. Where more recent information was available (such as the number of lawyers or clients), it has been taken into account in the article. However, this information has no bearing on the firms’ ranking positions. Some of the law firms featured are also active in other European countries in which JUVE Patent has not yet conducted research.

Due to different rules on client confidentiality this list is not exhaustive, but simply a selection chosen by JUVE Patent.