The German government is considering an amendment to the automatic injunction in patent law, following a meeting between the Federal Ministry of Justice and representatives of industry and professional associations. The purpose was to discuss automatic injunctions in patent law and the so-called injunction gap. Although a complete abolition is currently not on the cards, an alternative is in sight. The Ministry of Justice intends to simplify and modernise the Patent Act and other intellectual property laws. 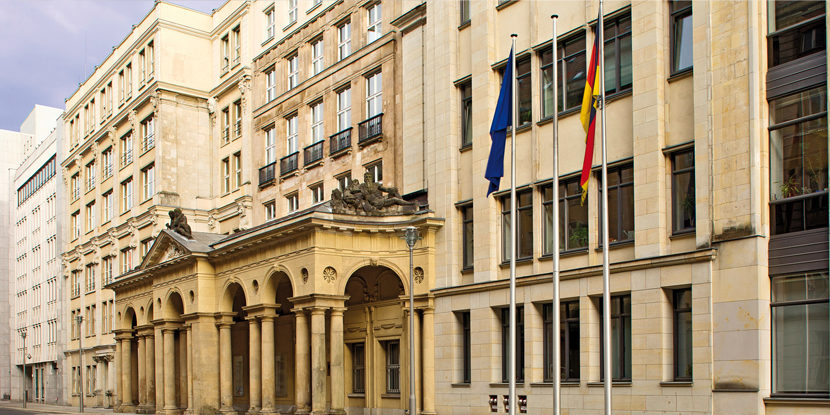 Last week, the Federal Ministry of Justice in Berlin hosted a meeting by the German government. Its aim was to consider an amendment to the automatic injunction in patent law ©Stephan Klonk

An initial discussion between representatives of the Federal Ministry of Justice, the industry and professional associations was not fruitful. Nevertheless, the strict rules surrounding automatic injunctions may be softened by the government.  The telecommunications and automotive industries would welcome this move.

The confidential meeting took place last week at the Federal Ministry of Justice and Consumer Protection. The meeting was highly confidential, but JUVE Patent has uncovered several details.

According to JUVE Patent sources, a complete abolition of the automatic injunction was not on the table. Rather, the participants discussed ways of mitigating its consequences in the future. This is especially with regard to legislation concerning SEPs or complex products.

German telecommunications and automotive industries in particular are fearful. They worry that an injunction means the paralysis of important infrastructure and the stopping of entire production lines. This is even in cases concerning the small parts of complex products such as network technologies or cars. Above all, non-practising entities bringing actions for injunctions over patents relevant to mobile telephone standards is fuelling concern.

It is clear, however, that the ministry and some experts are unwilling to do away with the automatic injunction. So German patent judges have compromised. Only a patent being found valid would enforce a first instance infringement judgment. This means the patent owner must first win opposition proceedings at the German Patent and Trademark Office or the EPO.

A further prerequisite would be if the Federal Patent Court were to dismiss a nullity suit. It is unclear whether a positive interim decision in a nullity suit would have the same effect.

Another source told JUVE Patent that the experts debated whether to lift the blocking of nullity suits during the opposition period. This would intend to speed up the Federal Patent Court’s decision on validity. As long as patent oppositions can be filed, third parties cannot file a nullity suit.

Another suggestion for mitigating injunctions was to implement a grace period similar to that permitted by the German Act on Unfair Competition (UWG). The infringer would then have the opportunity to find a workaround or alter their product to ensure there is no longer an infringement.

One source claims that the meeting was less about SEP suits and more about complex products. “The Huawei vs. ZTE decision from the European Court of Justice already provides sufficient safeguards for injunctions arising from an SEP.”

In the run-up to the expert discussion, it was clear that the so-called injunction gap, as well as the consequences of automatic injunctions, would be an important topic. A source confirmed that the injunction gap was discussed, albeit less intensively.

Most experts consider the injunction gap the fundamental ill of the German system. In an interview with JUVE Patent, Beat Weibel, head of IP at German tech giant Siemens, said that “The injunction gap is simply unacceptable from the industry’s point of view.”

However, it is unknown if the meeting discussed the measures. “The Federal Ministry of Justice is aware that the duration of nullity proceedings in some areas of technology does not meet the expectations of the German innovative industry,” a spokesperson told JUVE Patent. “Here we are striving for improvement in various aspects.” But, said the spokesperson, the ministry is yet to decide the necessary steps.

According to unanimous statements by participants, the discussion is the first step towards a possible overhaul of the German Patent Act.

“We’re now evaluating the opinions. Then we’ll decide the next steps,” said the ministry’s spokesperson. They added that the ministry was planning a legislative project to simplify and modernise the Patent Act and other intellectual property laws.

The discussion surrounding the automatic injunction and the injunction gap will undoubtedly continue in the coming months. It touches on important pillars of the German patent system, especially when viewed through an international lens.