The German Bundestag is to vote next week on the renewed attempt to enact the Unified Patent Court law. Internationally, a solution for the London UPC divisions has been discussed. According to JUVE Patent sources, they are to go temporarily to Paris and Munich. 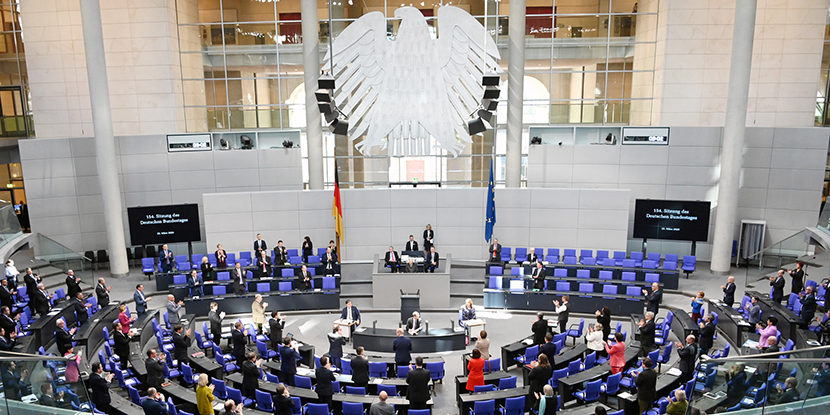 Next week the German parliament votes again on the UPC legislation. ©Achim Melde/Bundestag

The federal government is pressing for a rapid second ratification of the Unified Patent Court legislation. This has become necessary after the German Constitutional Court declared the first ratification invalid in spring.

As early as 29 July the Federal Government submitted the draft law for a second round of ratification to the Bundestag and Bundesrat for parliamentary approval. According to experts, the new draft is largely unchanged from the first ratification bill. This is because the Constitutional Court had not commented on the content of the law or the UPC. It had only criticised the fact that the German Bundestag had voted on the Act by a simple majority instead of a two-thirds majority.

The Bundestag will now again deal with the UPC ratification in a first reading next week. According to insiders, however, there will be no debate among the members of parliament. Usually, they first refer the law to the relevant committees for discussion. The Committee on Legal Affairs is the lead committee. The Culture Committee must also deal with the law. The second hearing in parliament is then decisive.

In the lee of Corona

It is no coincidence that the UPC laws are being presented to parliament right now. In order for it to be approved by a two-thirds majority, a corresponding number of members of parliament must be present.

At present, however, because of the corona pandemic, there are a number of draft laws that require the approval of two-thirds of the members of parliament. In addition, the Bundestag is currently discussing the 2021 budget, which means that a large number of members of parliament are guaranteed. According to insiders, the UPC ratification should sail through parliament in this slipstream.

Yesterday it has already taken a first hurdle. The German Bundesrat, the second chamber of parliament, dealt with the ratification law in a first sounding. It had no objections.

As a rule, the federal government uses this first vote to test whether there are reservations in the Second Chamber against proposed legislation. The actual vote follows when the bill has passed the Bundestag.

It is not known how the big a majority in the Bundestag exists for the UPC laws. There was no resistance in the first ratification run. However, too few members of parliament had voted on the law.

Parallel to the developments in Germany, an agreement seems to have surfaced as to what should happen in the future with those UPC divisions which were due to be based in London. They will be responsible for chemical and pharmaceutical patents as well as patents in the field of human necessities.

At the beginning of the year the UK government declared its withdrawal from the UPC. Since then it has been an open question where the London parts of the UPC central court should move to.

According to insiders, there will be a temporary solution. The London divisions will initially be divided between the two remaining locations of the central court in Paris and Munich. At the first revision of the UPC contract, seven years or 2.000 cases after the official start, the UPC states are to make a final decision where they will be based.

The preparatory committee of the UPC has not yet confirmed on the current decision. But the information became public after the committee meeting on September 11.

The London firm Bristows reported yesterday that the member states in the preparatory committee initially agreed to divide the London parts between the two existing sites in order not to disturb a quick ratification. An agreement on a third location for the central court is considered politically difficult.

Recently Italy had applied with Milan. France and the Netherlands have expressed their intention of hosting the spare UPC division. According to sources some eastern European countries did as well.

The rapid ratification in Germany is not without controversy, however. Shortly after the No of the Constitutional Court against the German UPC legislation Düsseldorf based lawyer Ingve Stjerna said in a statement to JUVE Patent, “The court did not even rule on the substantive complaints and even hinted at further constitutional deficits of the agreement. It remains to be seen what conclusions the federal government will draw from this decision. If, despite these problems, the German government continues to adhere to the Convention, a new constitutional review by the Constitutional Court will have to be considered, possibly of a complaint from a company.”

The Düsseldorf based IP lawyer had submitted the first, successful appeal to the Constitutional Court.

On 17 September the Free Information Infrastructure (FFII) raised objections against the new vote on the UPC legislation. “Germany will violate three international agreements with the Unitary Patent”, wrote Benjamin Henrion, president of FFII, in an open letter to the members of the German Bundesrat.

FFII is a European alliance, claiming to defend rights to free and competitive software creation.

Henrion continues: “If those points are not seriously addressed and the UPCA sent back for renegotiation, we will consider asking the German Constitutional Court to look again at those issues in a second constitutional complaint”, wrote Henrion.

This article was updated on 13 October 2020 to reflect the latest developments at the German parliament.