The Federal Constitutional Court has again received two complaints against the German UPC legislation. The identity of the plaintiffs is currently unclear, as is whether German ratification of the Unified Patent Court will now have to be halted again. Germany is the last country to ratify the UPC before the new court can start. 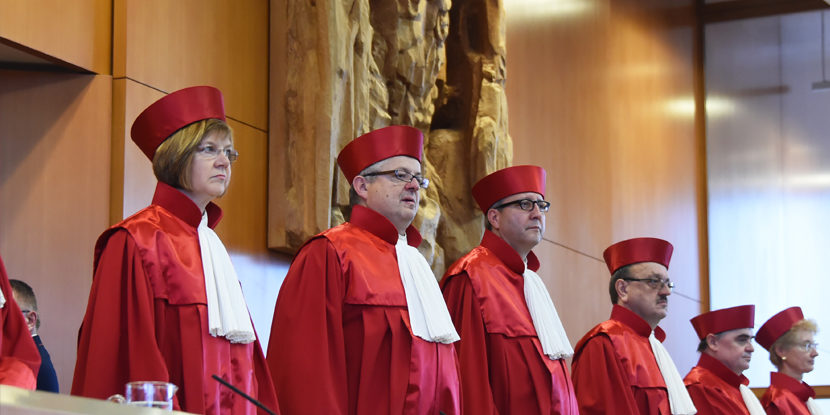 The judges of the German Constitutional Court have received again complaints against the UPC. It's yet unclear whether they will decide on them or not. ©picture alliance/dpa/Uli Deck

Another chapter has been added to the endless UPC saga. Two constitutional complaints were filed last Friday against the German ratification law for the Unified Patent Court. This was confirmed by the spokesman of the German Constitutional Court responding to a request from JUVE Patent.

It is currently unknown who the claimants are. The Constitutional Court did not provide any information on this matter. However, in the run-up to the votes in the German parliament, two groups had hinted at potential lawsuits.

In November, Foundation for a Free Information Infrastructure (FFII) took a combative stance, calling on companies to join forces to file a constitutional claim.

Furthermore, the plaintiff of the successful first constitutional claim also continues to follow the ratification process on his website. Following the Constitutional Court ruling in March, he too had speculated on a company’s claim against the UPC.

Neither party responded to to JUVE Patent’s inquiries.

It is also not known at present which grounds of appeal the two unknown claimants cite against the UPC laws. The Constitutional Court also here provided no information. Nor did it comment, when asked by JUVE Patent, on whether it will accept the complaints at all and ask the Federal President to halt the ratification process again.

To complete German ratification, federal president Frank-Walter Steinmeier must now sign the law in order for it to enter into force.

As a last step, the Federal Government must deposit the instrument of ratification with the European Council.

However, the UPC member states agreed some time ago that the German government will wait with this last step until the preparations for the UPC launch have been completed. The deadlock over the UPC in recent years, and the UK’s withdrawal from the project, have, for example, made the selection process of the UPC judges more difficult.

Second constitutional challenge for the UPC

With the announcement of the two complaints, history has repeated itself. The German parliament had approved the UPC legislation in 2017. But a constitutional complaint by Düsseldorf lawyer Ingve Stjerna had led to the Federal President suspending the signing of the UPC documents in June 2017 and the UPC process had to be halted until today.

Ingve Stjerna had criticized various aspects in his first complaint, including the voting process in the Bundestag.

However, critics noted that the Constitutional Court’s ruling in March 2020 also addressed other possible points of contention. (Co-author: Christina Schulze)

JUVE patent will keep you up-date on further developments on this page as well as on LinkedIn and Twitter.