The German Armed Forces has changed its choice of assault rifle manufacturer, from long-standing supplier Heckler & Koch to C.G. Haenel. The latter is the German subsidiary of a UAE corporation. But Heckler & Koch is fighting the contract decision with all its might; new patent law accusations could be the turning point. 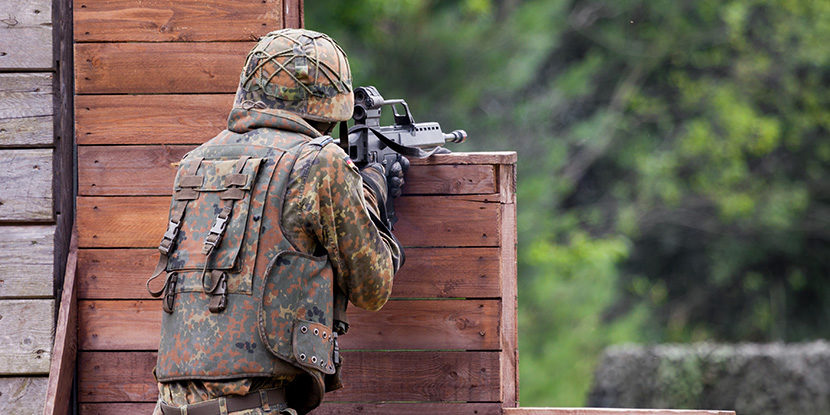 Technically, assault rifles are very similar - but the decision regarding a supplier is highly political ©filmbildfabrik/ADOBE STOCK

For 60 years, the German Armed Forces’ assault rifle supplier was Heckler & Koch. However, the close relationship has deteriorated. Now, in a break from tradition, the army has awarded the contract to C.G. Haenel, a traditional German company known for hunting rifles.

But this has culminated in Heckler & Koch filing a patent infringement suit against C.G. Haenel at the Düsseldorf Regional Court. The prestigious procurement of the new standard firearms could get interesting.

During another weapons purchase, insiders from the forces openly spoke ill of Heckler & Koch. However, security concerns were also raised about C.G. Haenel. This is because the manufacturer is part of the German Merkel Group, owned by UAE-based defence corporation Tawazun. The company’s provenance prompted the raising of security concerns.

Furthermore, for Heckler & Koch, the decision to change suppliers is economically problematic. The company filed an application for review under public procurement law; now the German Armed Forces procurement authority (Federal Office of Bundeswehr Equipment, Information Technology and In-Service Support, or BAAINBw) must comprehensively review the awarding of the contract. Meanwhile, Heckler & Koch filed a patent infringement suit against their competitor at Düsseldorf Regional Court.

EP 20 18 508 B1 protects a rifle-locking system and names well-known weapons developer Robert Hirt, from Heckler & Koch, as one of its six inventors. However, now Hirt works for Caracal – also a subsidiary of Tawazun. Several years ago, the company hired Hirt along with other developers to design an assault rifle.

In addition to this switching of counsel, interesting case law at Düsseldorf Higher Regional Court also plays a role. In cases in 1996 and 2005, among others, the court ruled that an awarding authority must examine whether possible infringements of industrial property rights restrict a bidder’s ability to deliver. This could impact a supplier’s suitability. However, this does not necessarily mean that the awarding authority must wait for the outcome of a patent dispute in court as this can take several years.

Some press reports state that C.G. Haenel is now excluded from the delivery. However, such reports are just as incorrect as those claiming Heckler & Koch is now the supplier.

Furthermore, a source told JUVE Patent that it is very likely that the German Armed Forces will choose one of these two manufacturers.

Since the beginning of the proceedings, a public procurement law team from CBH led by Stefan Hertwig has represented Heckler & Koch. However, Heckler & Koch did not rely on the firm’s patent experts to file the patent infringement suit.

Roland Stein’s team of public procurement lawyers, Blomstein, represents C.G. Haenel. The Berlin boutique is known for its defence sector expertise and has litigated for German Naval Yards in an economically-significant case. However, according to reports, C.G. Haenel has not yet appointed a representative for the patent infringement proceedings.