OFDMA is an OFDM-based multiple access scheme where different subsets of subcarriers are allocated to different users, allowing simultaneous data transmission to or from one or more users. Thus, OFDMA technology enables better utilization of the frequency spectrum.

The difference between OFDM and OFDMA is illustrated in Fig. 3 as follows (Illustration of OFDM and OFDMA concepts). Similar to OFDM, OFDMA employs multiple subcarriers, but the subcarriers are divided into several groups. Each group is referred to as an RU (resource unit). With OFDMA, different transmit powers may be applied to different RUs. In this way, the efficiency of the network can be significantly increased for a large number of users. 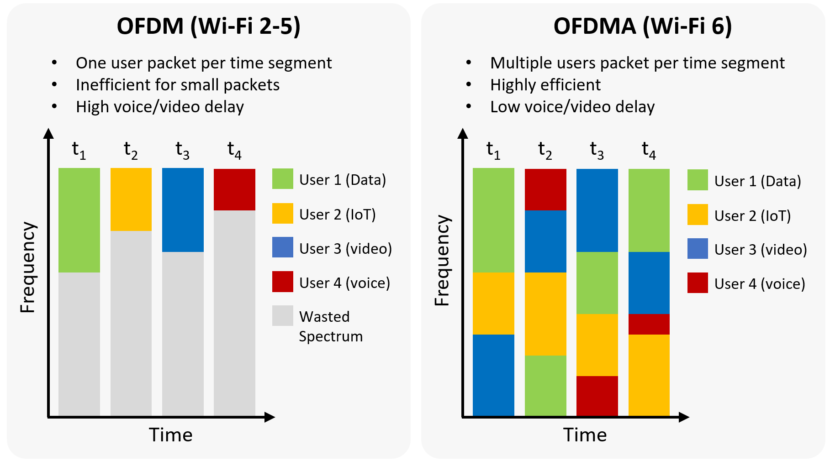 Fig. 3: Comparison between OFDM and OFDMA

Wi-Fi 6 supports OFDMA in both downlink and uplink direction. In downlink OFDMA, an access point (AP) determines the allocation of RUs based on the downlink packets and priorities of users. In uplink OFDMA, the stations inform respectively the AP that itself has buffers need to be transmitted, then the AP schedules resources for one or more stations based on the needs and the performance of the channels.

MU-MIMO technology uses spatial multiplexing with independent data streams on the same bandwidth, wherein each data stream is transmitted by multiple antennas with defined phase leading to a constructive interference at a particular point in space, e.g. location of the receiver. It enables the AP to exchange data with multiple terminals at the same time. Here a distinction is made between downlink MU-MIMO (DL MU-MIMO) and uplink MIMO (UL MU-MIMO).

For downlink communication, MU-MIMO has been introduced by the IEEE 802.11ac Wave 2 standard (Wi-Fi 5). Wi-Fi 6 supports DL 8×8 MU-MIMO with up to eight spatial streams by using eight antennas, which results in a higher access capacity. A significant improvement in view access capacity of the system and balance of the throughput is achieved with Wi-Fi 6 by using OFDMA technology in combination with MU-MIMO allocating different RUs to the spatial streams for multi-user multiple-access transmission.

As a significant innovation over previous standards, Wi-Fi 6 also supports UL MU-MIMO technology, in which the data is transmitted on multiple spatial streams by using multi-antenna technology of the transmitter and the receiver (see Fig. 4). Like for downlink, Wi-Fi 6 also supports simultaneous use of OFDMA technology and MU-MIMO for uplink. With this function, the transmission efficiency in multi-user concurrent scenarios is significantly improved and application delay is greatly reduced. 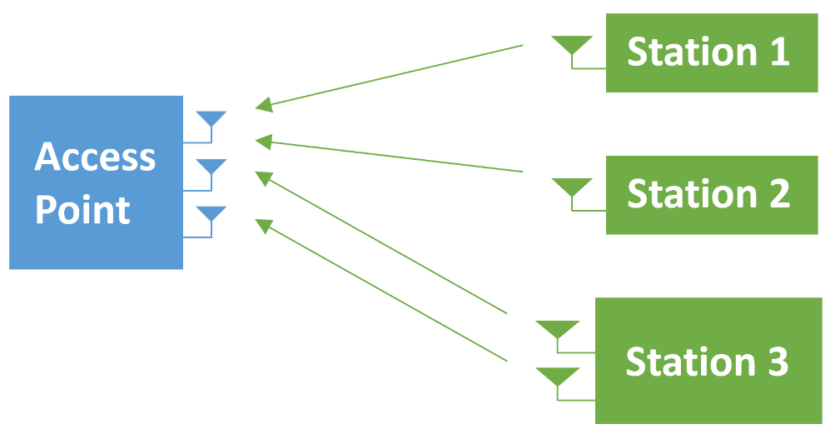 OFDMA and MU-MIMO: Alone or Together

Although 802.11ax allows OFDMA & MU-MIMO to work at the same time, these technologies are different and can operate independently from each other. OFDMA allows multiple users to subdivide the frequency bandwidth of a time segment to improve the concurrency efficiency. MU-MIMO allows multiple users to use different spatial streams to increase the throughput. They are therefore complementary and could be utilized based on the type of application, as shown in Fig. 5 as follows:

As illustrated in Fig. 5, different users (cf. e.g. web-browsing, video and chat) can use different resource units (RUs, cf. a truck divided by rectangles illustrating RUs) to communicate (OFDMA). Further, a user (cf. e.g. video) can use several spatial streams (cf. trucks on different lanes) in parallel and this can be done by many users simultaneously (MU-MIMO).

That OFDMA and MU-MIMO can work together can be explained by taking an example: When there are eight users and four RUs, users 1-5 use RU1, and users 6-8 use RU2-RU4, respectfully, and users 1-4 use different spatial streams to transmit data on the same RU1. That is, in RU1, there are four users that use different spatial streams in parallel. In this case, the OFDMA and the MU-MIMO are therefore working together.

Standardization and Deployment of Wi-Fi 6

Numerous Wi-Fi Alliance members have been involved in the development of Wi-Fi 6 for OFDMA and MU-MIMO technology. Fig. 6 shows the number of proposals submitted by February 25, 2020 by each of two IEEE 802.11 standard working groups, “High Efficiency WLAN Study Group” and “Task Group ax” during the standardization of these technologies. 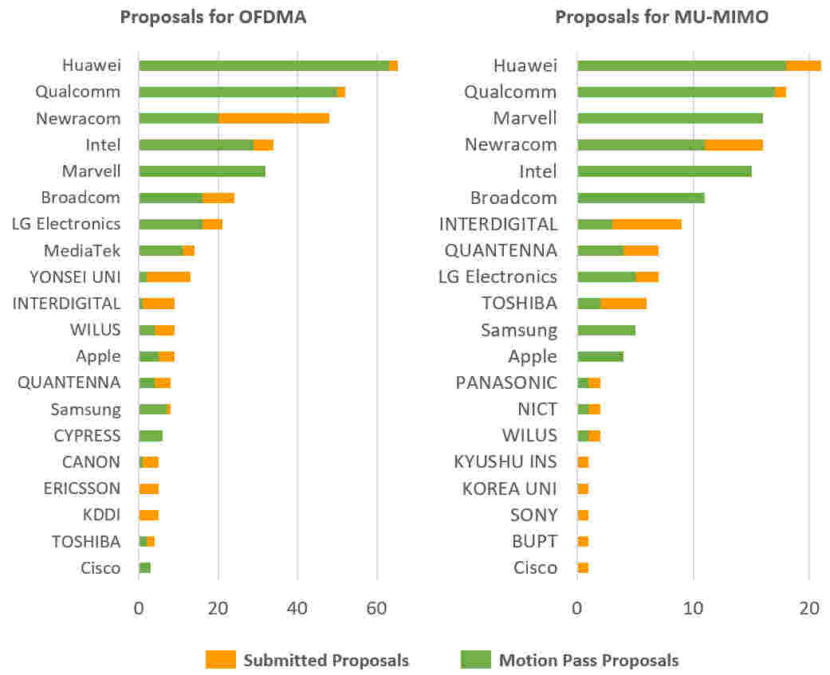 Fig. 6: Number of Submitted Proposals and Motion Pass Proposals for OFDMA and MU-MIMO per Wi-Fi member

Source: All proposals submitted by the two working groups “High Efficiency WLAN Study Group” and “Task Group ax” as can be found on https://mentor.ieee.org/802.11/documents) are classified and the number of proposals relating to the OFDMA and MU-MIMO has been counted.

However, not all these proposals are agreed by parties involved in the standardization. The proposals agreed to be a part of standard are called “motion pass proposals”. If these are only counted in both technologies, the “Big Three Players” for the OFDMA and MU-MIMO now become Huawei, Qualcomm and Marvell (see green bars in Fig. 6).

With these contributors, the IEEE 802.11ax task group is working further on the development towards the ratification of IEEE 802.11ax, which is expected in 2020.

On the implementation side, commercial products supporting Wi-Fi 6 have been developed by co-projects of Huawei and Qualcomm. This led to the release of the industry’s first commercial access point in 2017. A high-performance Wi-Fi network requires not only the upgrade of Wi-Fi access points to the latest 802.11ax standard, but also features related to signal coverage and software algorithm optimization. In addition, a full range of Wi-Fi access point products and solutions need to be customized based on different application scenarios.

By enabling a wide range of applications, the economic impact of Wi-Fi 6 may be huge. A study commissioned by the Wi-Fi Alliance found that Wi-Fi 6 has a large impact in the following four categories: Developing alternative technologies to expand consumer choice, creating innovative business models to deliver unique services, expanding access to communications services for fixed and mobile networks and complementing wireline and cellular technologies to enhance their effectiveness. This study also reviews tangible, economic gains that Wi-Fi 6 provides consumers and producers, and then adds the net contribution to Gross Domestic Product (GDP). It shows that the global value of Wi-Fi was 1.96 trillion USD in 2018 and will increase – certainly with the help of Wi-Fi 6 – up to about 3.47 trillion USD in 2023. (https://www.wi-fi.org/download.php?file=/sites/default/files/private/Value_of_Wi-Fi_Highlights.pdf).

The Wi-Fi 6 standard will continue to spread in the upcoming years and coexist with wireline and cellular technologies (such as 5G) to enhance their effectiveness. Due to its attractiveness and economic impacts, this technology will probably largely influence all parts of the industry. Consequently, this will also have a large impact on the IP strategy all over the supply chain.