In 2020, European patent firms raised their hourly rates by around 4% - a figure which has risen despite the coronavirus pandemic. But, according to a JUVE Patent survey, German litigation firms are not harnessing their market potential. In fact, the survey shows that the gap between the German and UK firms is surprisingly high. 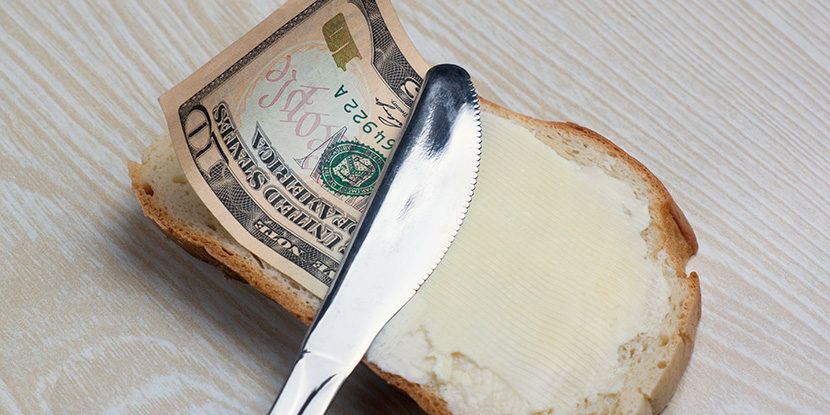 Is patent still a law firm's bread and butter? JUVE Patent has released the results of its first survey on hourly rates for Europe's patent lawyers ©Aliaksei Smalenski/ADOBE STOCK

In Europe, the coronavirus pandemic continues to rage on. Many economic sectors are close to being on their knees. Others, like the life sciences sector, are booming. This is thanks to the unprecedented demand for respirators, analytical equipment and vaccines to help combat the COVID-19 virus.

Moreover, the ongoing coronavirus pandemic has not fazed European patent firms. Patent law outfits have maintained, or even slightly raised, their hourly rates. Indeed, according to data from 52 firms from France, Germany, the UK and the Netherlands, during 2020 European patent firm fees saw an increase of between 3.5 and 4.8%.

Interestingly, hourly rates for partners and associates have recently increased to different degrees. Firms did not raise their hourly rates evenly across litigation, prosecution and advisory work. However, rates in litigation experienced the weakest growth. 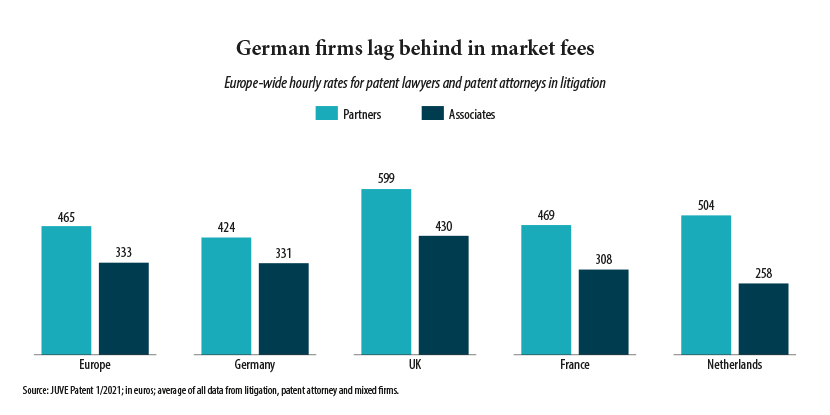 Partners and associates charge the highest hourly rates for their litigation work, as demonstrated across all European markets. Unsurprisingly, the fees of UK litigation practices in law firms and mixed patent firms remain ahead of their counterparts. London partners in the top segment charge around 700 euros for their litigation work, with the average hourly rate for partners around 600 euros. This amount includes litigator fees in both pure and mixed law firms. (See: German firms lag behind in market fees)

In other major European patent jurisdictions, litigators can only dream of such amounts. Surprisingly, it is not the German or French litigators who are hot on the heels of their London counterparts. Rather, litigators in Amsterdam and The Hague charge the highest hourly rates for partners. However, in terms of associate fees, Dutch firms bring up the rear. They average out at 258 euros.

Looking at pure law firms in the field of patent litigation, the gap between London firms and the rest of Europe becomes even wider (see: Big gap between UK and German law firms). On average, London partners charge 735 euros. Their associates charge 450 euros.

From high-profile to bread and butter

In Germany, on average a litigation partner in a pure law firm charges 298 euros less than a partner in London. However, the difference between London and German associate fees is only 124 euros. 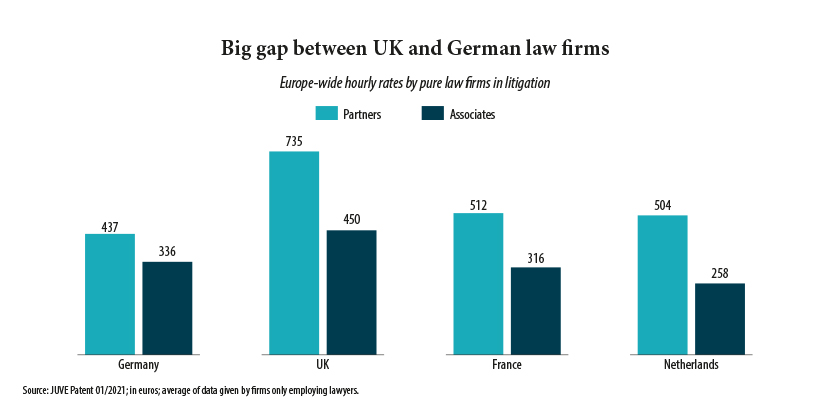 Higher operating and wage costs compared to Düsseldorf, Mannheim and Munich naturally impact the high London fees. But, in the global litigation business, both markets are of roughly equal importance. Thus, the different hourly rates depend on local market conditions.

Furthermore, in terms of the complexity of high-profile instructions, the German market is in no way inferior to London. As such, some market-leading German litigation teams charge hourly rates at London levels.

Quinn Emanuel, for example, is known among competitors to have extremely high fees. The German team is considered the most profitable in the country, outstripping even top M&A firms. A sizeable proportion of Quinn Emanuel’s 40.6 million euro turnover in 2020 came from patent litigation for clients such as Daimler and Qualcomm. Even with an extremely high workload, such turnovers could not be achieved with the average German hourly rates.

The average German patent litigation firm cannot charge such fees. Some reasons are historical. For example, for many years payment was linked to the official scale of fees for lawyers and patent attorneys, set by the German government. It was not until the 2000s that Germany established alternative billing models.

Today, hourly rate may be the predominant instrument for billing clients. However, many German firms offer fees that are too low in high-profile cases. UK and Dutch firms demand significantly higher fees in parallel proceedings.

In addition, the competition in Germany is fierce. For almost ten years, the German litigation market has boomed, with numerous UK and US firms joining the traditional players. Most recently, Herbert Smith Freehills established a patent team in Düsseldorf. Numerous spinoffs, such as Taliens or Ampersand, are breathing life into the market. Still more patent attorney firms, like Vossius & Partner or Viering, Jentschura & Partner, are entering the lucrative segment with litigation teams of their own.

But the newcomers can rarely charge the high hourly rates of the market leaders – at least at the beginning.

In all European markets, the number of mixed firms where patent attorneys and lawyers work together is growing. However, according to the JUVE Patent survey, in Germany, France and the UK litigation teams charge hourly rates below the market average. No data is available for Dutch firms.

Such mixed firms arose when patent attorney firms stopped passing on lucrative litigation work to specialised law firms. Instead, they deployed their own litigation departments with lawyers. Additionally, law firms increasingly include patent attorneys. In the French market especially, their number is increasing. 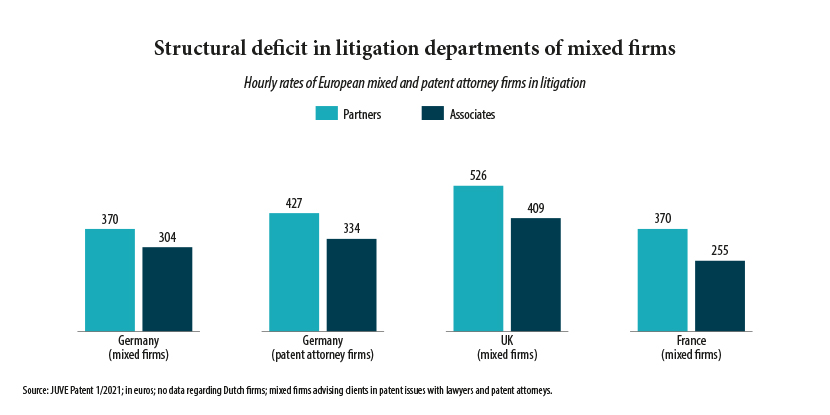 In German and French law firms, where this approach is most widespread, partner and associate hourly rates tend to be much lower than pure law firms. (See: Structural deficit in litigation departments of mixed firms)

As newcomers, litigation departments of mixed firms often had to stand out in their segment through competitive pricing. Furthermore, lawyers seem to be guided internally by the fees of their patent attorney colleagues. As a rule, the two professional groups in these firms charge roughly the same rates – regardless if work is litigation, advice or prosecution.

The hourly rates of patent attorneys in firms that specialise in litigation, but do not employ their own lawyers, shows how much catching up there is to do. This is especially true in German mixed firms. According to JUVE Patent’s data, these patent attorney firms charge 427 euros per partner hour and 334 euros per associate hour. This is almost 60 and 30 euros more respectively than specialised colleagues in mixed firms. 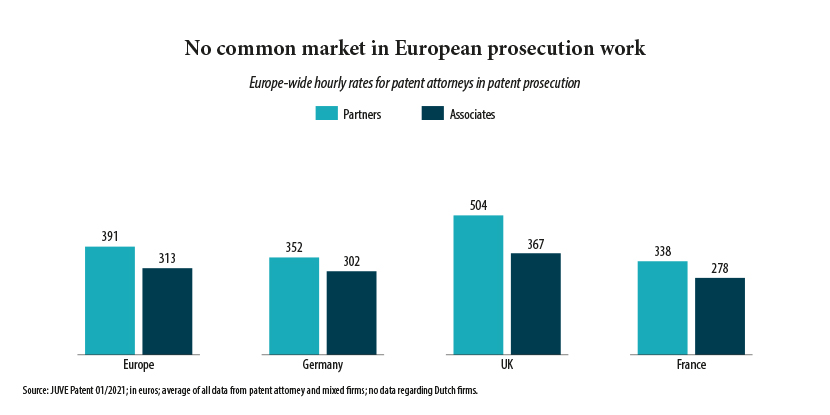 Purely in terms of the number of patent attorney firms in both countries, UK and Germany firms share the bulk of European prosecution work. UK firm partners charge around 150 euros more than their German counterparts, with UK firms charging an average of 60 euros more for an associate than a German firm. Partners and associates from French firms lag slightly behind. (See: No common market in European prosecution work)

Here, differences in the filing of national patents may have an impact. But, since most of the firms’ work goes into filing European patents, the different hourly rates in this segment are surprising. After all, French, German and UK patent attorneys operate in a common market before the EPO.

The question arises as to why a company should pay different fees to French, German or UK patent attorneys to file a European patent. Perhaps higher costs for travelling to Munich or The Hague could objectively justify this.

But the EPO is looking to switch to more frequent oral hearings. As such, travel costs could cease to be a future argument. It is unlikely that patent attorney prices will come under pressure any time soon. On the contrary, only a few firms with a high backlog are likely to raise their hourly rates in coronavirus times. 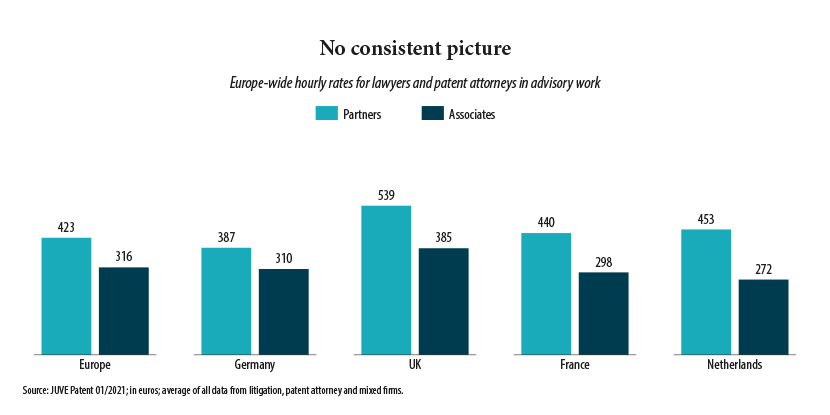 In many interviews, patent firm partners reported that the pandemic has impacted their clients in differing degrees. For example, the pandemic hit automotive sector companies hard. On the other hand, companies in the life sciences sector are inundated with orders.

However, many litigators and patent attorneys report that, across all sectors, clients tend to pursue the same IP strategy as in 2019. Companies are still litigating for technical IP rights at a high level, continuing to seek advice on licensing agreements, and research and development collaborations. Clients keep filing patents in core technology for AI, novel biotechnological medicines, or in mobile communications.

Companies from sectors under pressure from the crisis, such as the car industry, exercise a flexible response. For example, many are filing divisional applications or surrendering their patent protection in less important markets. A German patent attorney says, “Key technologies continue to be patented.” Even in the car industry, clients continue to file and defend patents for core technologies.

Patents continue to be crucial assets for companies from all industrial sectors. As such, hourly rates are not yet under such high pressure. Lawyers and patent attorneys are using other means to help companies that find themselves in difficulty. For example, firms are reducing the size of their advisor teams, or billing fewer hours than actually worked. In some instances, associates instead of partners do the required work.

Therefore, the hourly rates alone do not demonstrate the extent to which the work of patent firms is changing in the crisis. At best, the development on turnover rates can shed light on current industry pressures. However, so far there are no such statistics. Hourly rate development over 2021 may provide more clarity.

JUVE Patent’s methods: In 2020, JUVE Patent asked 360 IP firms from France, Germany, UK and the Netherlands to deliver data on their hourly rate regarding litigation, prosecution and advisory work. All firms are active in the patent field, with 52 firms delivering the data. Only in a few of the sub-categories is the data not meaningful. For example, Dutch patent attorney firms have not provided any information.

In 2019, JUVE Patent collected data from patent firms in France, Germany and the UK for the first time. Here, it received data from 38 firms. JUVE Patent has converted the UK firms’ figures in pounds into euros based on the exchange rate on 31 December 2020.