JUVE Patent News & Stories People & Business Made in Düsseldorf and Munich: the quest for reliability
Germany

Made in Düsseldorf and Munich: the quest for reliability

Düsseldorf Regional Court has used the change in leadership at one of its chambers to announce its intention to systemise proceedings at all three first-instance chambers. Standardised proceedings have been in place at Munich Regional Court for several years. An evaluation of the 'Munich Procedure' attracted attention, not least for its clear communication on the application of FRAND rules. This is how two of the most important first-instance patent courts in Europe are leading the way. 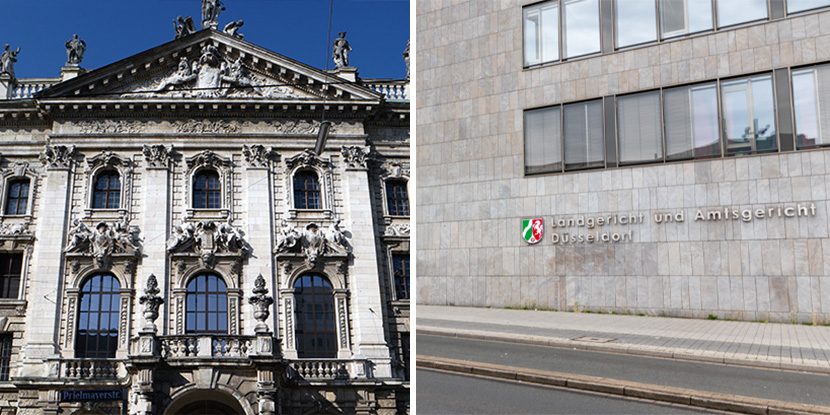 Many in the patent community speculate about the race between the regional courts of Munich and Düsseldorf to be the most attractive for patent suits. ©Andreas Anhalt/JUVE and sunakri/ADOBE STOCK

It was not just a question of sucession. This week, Bérénice Thom was appointed presiding judge of Patent Chamber 4a. She follows Tim Crummenerl, after his move to the Federal Court of Justice in April. The three presiding judges of Düsseldorf Regional Court’s patent chambers used Thom’s appointment to make a clear statement. From now on, proceedings will no longer differ between the three chambers.

“We can do without the early first hearing for economic and ecological reasons,” says Daniel Voß, presiding judge of Chamber 4b, in an interview with JUVE Patent. “We want uniform procedural management of all three patent chambers.” Unlike in the Munich Procedure, for example, judges and parties used this hearing to clarify administrative rather than substantive issues. In future, the proceedings are to be uniformly faster and more efficient. Abolishing this early hearing means lawyers will have one less hearing to attend. The court has thereby responded to a frequently expressed wish from the legal community.

From now on, the judges will set deadlines for the proceedings once the parties have filed a complaint and submitted the statement of defence respectively. However, the time frame will not be as clearly defined as in the Munich Procedure. 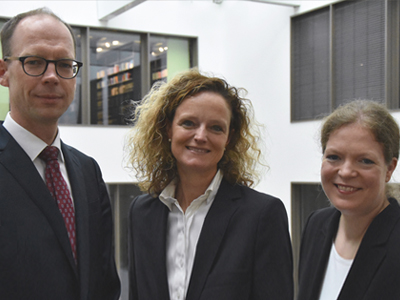 “We are concerned with maintaining the usual high standard of quality, while at the same time ensuring proceedings are clear and streamlined. We do not specify a fixed time frame per case, as it does not do justice to the varying complexity,” explains Sabine Klepsch, presiding judge of Chamber 4c. It is clear to the judges that extensive SEP proceedings with numerous parties require more time than less legally complex cases.

With its new standardised procedure, Düsseldorf Regional Court has made it clear that it has the same goals as Munich Regional Court. Quality decisions and reliable and predictable proceedings are the top priorities. The courts also have similar aims when it comes to their duration.

“The decision is not to be understood as a response to the Munich Procedure. We are not concerned with competition. We want to make decisions on a high legal and technical level,” says Bérénice Thom when asked by JUVE Patent. The two courts have thus chosen different paths in how they conduct cases.

As part of its Munich Procedure, the Bavarian court imposes a strict time limit. There is an intital hearing on substantive issues within three to four months once papers are served. The decision on the merits of the case is available in eight to twelve months after the serving of papers. From Munich’s point of view, this approach has proved successful. The chambers even underwent an evaluation by MPI in 2020. The result confirmed that the lawyers particularly appreciate the predictability of the court’s decisions and the quality of the judgments. 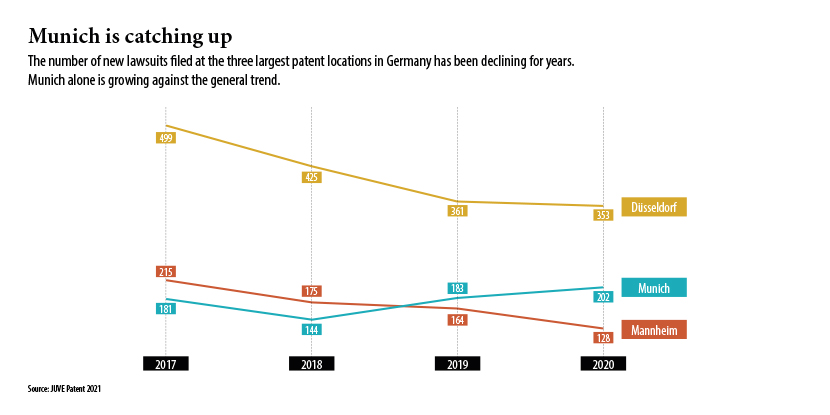 It also speaks volumes that Munich is the only one of the three major German first-instance patent courts to see an increase in filings. As a result, the court recently established a third patent chamber.

Overall, the number of newly filed patent suits in Germany has been falling continuously for years. With a decline of around 18% compared to 2019, Düsseldorf has been particularly hard hit. The numbers are also falling at the third largest patent court in Mannheim.

SEP holders in particular, however, like to sue in Mannheim. For several years, the court there was concerned with the conversion to digital files, but more importantly substantial personnel issues. Four years ago, Andreas Voß moved to the patent senate at the Higher Regional Court and his successor tragically died in a sports accident. Patricia Rombach, now a judge at the Federal Court of Justice, briefly headed the chamber. Since Peter Tochtermann became the presiding judge in September 2018, Mannheim seems to be sailing in much calmer waters.

Overall, Düsseldorf remains the location where most patent lawsuits are filed. According to the court, it has already managed to shorten the duration of proceedings, despite the pandemic. “By consistently using video hearings and hybrid hearings during the pandemic, we had no defecits. We were even able to speed up proceedings,” says Daniel Voß. The Munich court is also using video technology as a solution during the pandemic. Both courts seem well prepared for the autumn and the fourth wave.