In the dispute with Hebenstreit Metal Decorating over sheet-metal presses, patent holder Koenig & Bauer scored a success at the Higher Regional Court Karlsruhe. However, questions remain as to whether trade secrets were also breached. The dispute continues. 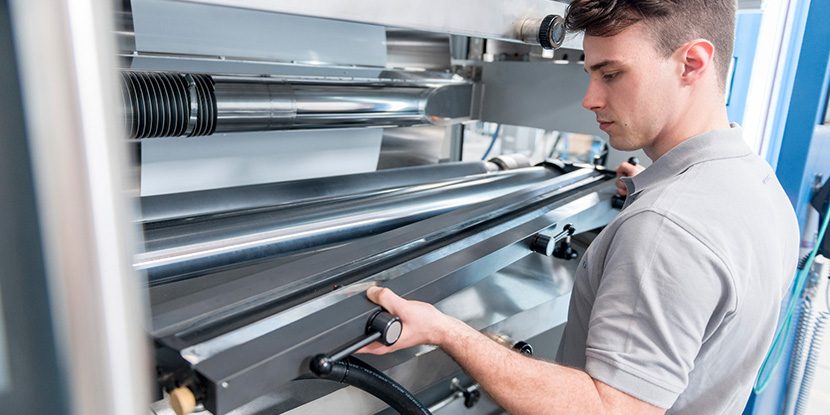 In addition to criminal proceedings, Koenig & Bauer filed civil suits against Hebenstreit and individual employees for the violation of trade secrets. ©Koenig & Bauer

The infringement and trade secrets dispute between metal-sheet press manufacturer Koenig & Bauer and its competitor Hebenstreit Metal Decorating, active in the maintenance, retrofitting and conversion of presses, has been marked by many setbacks on both sides.

Koenig & Bauer has won the second instance of the patent infringement case. However the breach of trade secrets dispute is still ongoing. The founders of Hebenstreit, based in Ludwigsburg, are former employees of the patent holder. Koenig & Bauer accuses them of having used the company’s technical drawings for their own business.

Koenig & Bauer, based in Würzburg, sued Hebenstreit for patent infringement. Its EP 1 266 852 B1 protects a device for feeding and stacking tabular goods. The technology is used in metal pressing, where it stacks the pressed metal plates on top of each other at the end of the line. The speed of the stacking process in particular, as well as its precise coordination with the speed of the press, plays an essential role. The original patent applicant was LTG Mailänder, which was acquired by Bauer + Kunzi (later Koenig & Bauer-MetalPrint) in 2006.

Koenig & Bauer accuses the former employees of unlawfully obtaining production drawings from KBA during their employment. After leaving the Stuttgart-based company, they allegedly used these drawings to set up the competing company.

In addition to the criminal proceedings, Koenig & Bauer also filed various civil suits against Hebenstreit and individual employees for the violation of trade secrets.

In the civil proceedings against Hebenstreit, the Stuttgart judges found a breach of trade secrets had taken place (case ID: 17 O 927/16). However, for formal reasons, they only partially upheld Koenig & Bauer’s claim. The appeal proceedings are currently pending before the Higher Regional Court Stuttgart (case ID: 4 U 360/20).

The Stuttgart Regional Court discontinued further civil proceedings against four defendants in April 2021 in return for monetary payments. The basis for the decision was the Trade Secrets Directive, an EU regulation which Germany implemented in April 2019.

According to the new German law, companies must put in place appropriate confidentiality measures to protect trade secrets. Determining whether this was the case at the time the defendants worked at KBA would have required extensive investigations. However, because the amendment to the law was not in force at the time of the criminal proceedings, the prosecution did not carry out the necessary investigations.

In parallel to the criminal and civil proceedings for breach of trade secrets, Koenig & Bauer also issued a warning to Hebenstreit in 2016 for patent infringement. The defendant responded to this in early 2018 with a negative declaratory judgment action. Hebenstreit intended to clarify that it has not infringed EP 852.

The patent owner then filed a counterclaim and demanded an inspection of Hebenstreit’s plant. In the course of the proceedings, Koenig & Bauer extended the counterclaim to include the allegation of patent infringement.

Hebenstreit filed an appeal against the denial of leave to appeal at the Federal Court of Justice.

Koenig & Bauer relied on Preu Bohlig for both patent infringement and the protection of trade secrets. The boutique is known for its strong position among German midsized companies, particularly in mechanical engineering.

Hamburg partner Daniel Hoppe, who also has experience as a public prosecutor, advised the patent owner during the criminal proceedings. Later, he also assisted them in the negative declaratory action and the corresponding counterclaim, as well as the subsequent infringement proceedings.

Hebenstreit Metal Decorating relied on the mixed IP boutique Gramm Lins & Partner in the patent infringement proceedings. Patent attorney Kai Stornebel has been advising the company for several years. While he advised on the technology of the patent, lawyers Hanns-Peter Schrammek and Stefan Risthaus took over the litigation.

For the appeal against the denial of leave to appeal, the company called in Axel Rinkler from Engel & Rinkler, which specialises in cases before the Federal Court of Justice.