France has seen upheavals to its patent law and the French patent market. Now JUVE Patent's first French patent firm ranking shows that there is more than one way to conquer the top of the market. Indeed, the leading trio in France could hardly be more different. 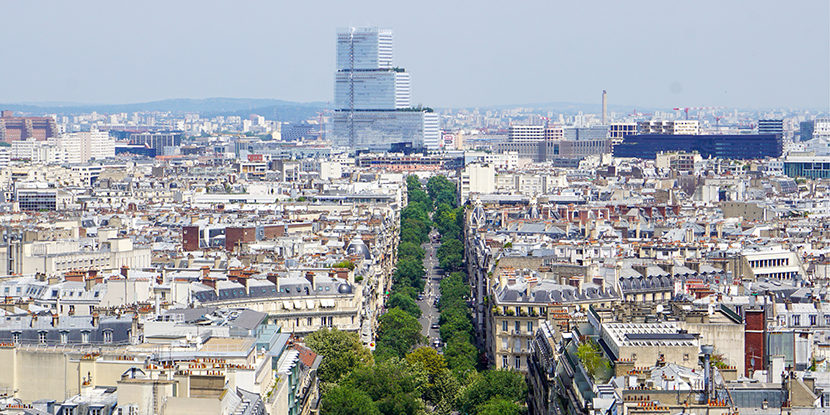 The new Tribunal de Paris houses the judges of the first instance for patent disputes in France. This modern building reflects the changes in French patent litigation. ©PhotoLoren/ADOBE STOCK

The new Palais de Justice in Paris is a physical embodiment of changes in the French patent market. Star architect Renzo Piano designed the high-rise building. The palais has housed the IP chamber of the Tribunal judiciaire, the centralised first instance court for patent disputes, since 2018.

The contrast to its former location, the Palais de Justice on the Ile de la Cité in the heart of Paris, could hardly be greater. Instead of endless, winding corridors, dark back rooms and halls steeped in history, visitors are greeted with an entrance hall flooded with light, modern well-equipped offices and negotiation rooms panelled in light wood. On clear days, the IP judges have an unobstructed view of Paris from their glass-fronted offices on the 36th floor.

Patent lawyers still attend second and third instance hearings at the Palais de Justice in the 1st arrondissement. But for first instance hearings the lawyers head to the modern but extremely small hearing rooms situated in a 160-metre high-rise building in a less popular suburb.

The French government reformed civil law during the building’s construction. These reforms also impacted the patent scene. For example, the question of trade secrets in patent disputes is becoming more prominent. Mostly it complicates the saisie-contrefaçon for securing evidence, an important aspect of French proceedings.

Furthermore, the first instance court has changed and rejuvenated the judge’s bench. At first glance this is not unusual. French judges frequently change chambers in order to preserve their independence. However, since the retirement of renowned judge Marie Courboulay, a new group of judges has emerged. The most experienced IP judge has been a member of the chamber for five years. However, others are already reaping praise from experienced patent lawyers for their deep understanding of patent issues and their inclusion of judgments from neighbouring jurisdictions.

Overall, the number of patent disputes in France is declining. Last year, plaintiffs filed around 200 new patent cases. Two years ago, the number was around 300. Nevertheless, the proportion of economically significant and complex telecommunications and pharmaceutical lawsuits has risen significantly. For economically significant patents, clients are also increasingly willing to pursue a lawsuit through all instances.

For example, one of the most important cases of the past year concerned FRAND licences. In the hearing between Conversant Wireless and LG, the parties pleaded for three days. The judges excluded the public from parts of the hearing – the first time ever in a civil case. However, the judges disappointed observers by finding the disputed patents non-essential.

So far, the UK remains the only court to have clearly ruled on FRAND licences. However, with the pending case between Philips and TCL, France could position itself as a future hotspot for FRAND decisions. This case also demonstrates the mounting questions surrounding the jurisdiction of courts in international patent disputes. In Philips vs. TCL, the Tribunal judiciaire clearly affirmed its jurisdiction. The same is true for the High Court of Paris in the anti-anti-suit injunction dispute between IPCom and Lenovo.

Such cases, together with widespread enthusiasm by judges and lawyers for international proceedings, mean recent years have seen increasing numbers of international law firms try to open a Paris office.

Furthermore, large UK and US law firms in particular are working intensively to build up and expand their French IP teams. This has met with varying degrees of success.

Few patent litigation firms with UK or US roots build up a strong and renowned team with experienced partners from their own ranks. Two examples are Allen & Overy and Bird & Bird. The IP practice of Allen & Overy has an impressive track record in important patent disputes, such as Bayer vs. Ceva. But Bird & Bird is also successfully positioned as a market leader with high-profile cases such as Boston Scientific vs. Edwards Lifesciences.

On the other hand, other UK or US law firms are trying to enter the French patent market with lateral hires. Currently, the most successful example is Hogan Lovells. The firm hired an up-and-coming young lawyer from now-disbanded traditional law firm Véron & Associés, integrating him into its international cases. Jones Day also brought in Thomas Bouvet, also a lawyer from the former firm. Bouvet was already an established figure among the younger generation at the time. He is now challenging the market leaders.

The latest firm to exemplify the lateral hire strategy is Clifford Chance. In autumn 2019, the firm took an important step in rebuilding its IP practice with a young counsel from August Debouzy.

However, UK and US firms are not the only ones successful in the French patent market, with internationally-positioned teams. National law firms also play at the highest level.

August Debouzy’s strategy, for example, is very successful. The full-service law firm is excellently positioned at the top of the market. This is because its team consists of litigation specialists with very strong technical understanding. The team also has many dual-qualified lawyers, who often represent their clients both in French national courts and before the EPO.

The heads of the practice, Grégoire Desrousseaux and François Pochart, began their careers at the French Patent Office. Today they are sought-after litigation specialists, most recently representing Asus in a suit against Philips regarding graphical user interfaces. The lawyers also represented Huawei in an SEP dispute with Intellectual Ventures. In the pharmaceutical sector, one of August Debouzy’s highlight cases was the pan-European lawsuit of Fresenius Kabi against Amgen concerning Humira.

Traditionally, IP litigation boutiques are big names in the French patent market. But the market has altered in recent years, as a number of spinoffs, startups and generational changes transform its composition.

Denis Monégier du Sorbier, for example, belongs to the senior generation of French patent litigation specialists. In 2015 his former IP litigation boutique merged with well-positioned mixed firm Hoyng in the Netherlands, and German market-leader Reimann Osterrieth Köhler Haft. Together, the outfits formed European champion Hoyng ROKH Monégier. In 2018, the firm added another team from Véron, featuring Sabine Agé and Amandine Métier. Hoyng ROKH Monégier Véron is now ideally positioned, both in terms of team size and age structure. Clients such as Gilead and Philips are increasingly placing their trust in the firm.

This extremely successful model is difficult to emulate at such a high level. Law firms such as Bardehle Pagenberg and Taliens pursue the same idea of the pan-European boutique. Bardehle Pagenberg’s French team is well-known for representing NPEs. It is currently conducting two of the most important proceedings for this type of client in the market. The firm represents Intellectual Ventures against Bouygues Telecom, SFR, Orange and suppliers such as Huawei in a case concerning SEPs and FRAND patents. This is as well as IPCom against Lenovo concerning an anti-anti-suit injunction and a preliminary injunction.

Taliens is a very young and small international boutique. It is also involved in the Intellectual Ventures case for core client ZTE.

But at the same time, the market leaders are being challenged by strong French law firms with long traditions. For example, the two long-established full-service outfits Gide Loyrette Nouel and Duclos Thorne Mollet-Viéville are holding their own. Small IP boutique Armengaud Guerlain is also well positioned in the market with well-known clients such as Wiko. The dispute currently pending before the Court of Appeal between the firm’s client Quadlogic and the state-owned energy provider ENEDIS over smart meter technology could boost the team’s visibility further.

The traditional law firm Casalonga is one of the few outfits in France to convincingly implement the mixed approach of litigators and patent attorneys. Other mixed firms such as Jacobacci or Vidon are mainly known for the prosecution work done by their patent attorneys.

In addition, the French patent market has a number of national patent litigation boutiques. These are highly specialised, comparatively small and originate from a wave of start-ups that revolutionised the French patent market ten to 17 years ago. These include Schertenleib, de Marcellus & Disser and Loyer & Abello. The latter, like older boutique Cousin & Associés, is currently working on its generational change. Schertenleib, on the other hand, is a young boutique advising clients such as Sandoz against AstraZeneca concerning fulvestrant. It also represents Mylan in a dispute with MSD concerning ezetimibe, as well as TCL in a dispute with Phillips over SEPs. Competitors consider Schertenleib a dynamic market challenger. (Co-author: Konstanze Richter)

For information on our research criteria, please click here.