“The impact of corona is comparable to the financial crisis,” says Pascal Faure, INPI CEO

The Loi Pacte reform at the INPI continues to change the French patent system, even while Europe struggles with the coronavirus crisis. JUVE Patent spoke to Pascal Faure, CEO of the French patent office, about the difficulties and achievements in implementing change in the midst of a pandemic. 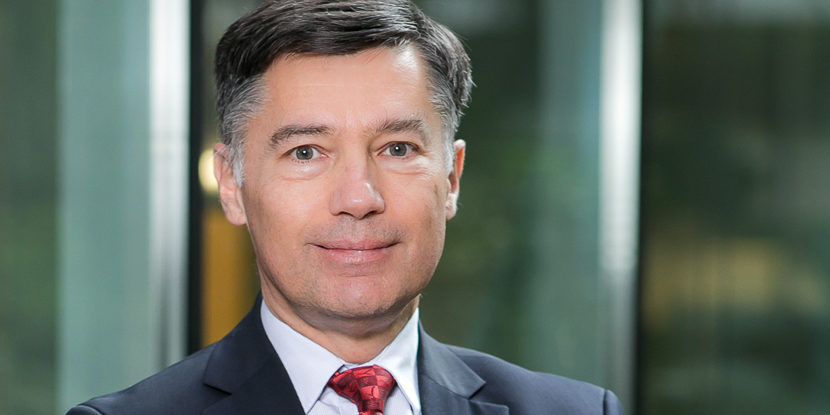 Pascal Faure, CEO of the French patent and trademark office (INPI) since autumn 2018, collaborated on the draft of the Loi Pacte. Prior to his current position, the qualified engineer was Director General for Enterprises at the French Ministry of Economy and Finance, responsible for sector-based policies, innovation and competitiveness. This was preceded by various management positions, among others at the Institut Télécom, the Ministry of Defence and the Ministry of Trade and Tourism. ©INPI

Loi Pacte is changing the scope of action for patent attorneys in France. In an effort to boost the number of applications for national patents, the French government is changing its patent system. In 2019, the French patent office (INPI) recorded 15,812 patents registered. This is a decrease of 2.5% compared to the previous year.

About half of the applicants came from around 50 major applicants, including heavyweights such as PSA, Airbus and L’Oréal. The new Loi Pacte reform is designed to encourage SMEs in particular to apply for more patents. Following the German model, patents in France will be examined for inventive step, with the office also introducing an opposition procedure.

JUVE Patent: In the first half of the year, various measures of the Loi Pacte came into force. Was it possible to enforce these during the COVID-19 lockdown?
Pascal Faure: COVID-19 has had little impact on our productivity in terms of reviewing and granting patents, and in terms of project deployment. We had a deadline on 1 April for the implementation of two major enlargement measures, patent oppositions and trademark invalidity, and we did it right on time.

As of April, it is possible to file oppositions against a granted patent. So far, there has only been one opposition. However, more could follow by the end of the year as oppositions can be filed up to nine months after a patent is granted.

“We recorded a slight decline in patent applications”

At the same time, in 2008, many companies streamlined their patent portfolios. This habit of rationalising its patent portfolio has remained since then. We should therefore not see, or if so only slightly, this consequence in the case of the coronavirus crisis.

What has the INPI done to support applicants during the crisis?
The INPI has extended the procedural deadlines from one or two months to four months. For example, this is for payment of the patent annuity or renewal of a design. 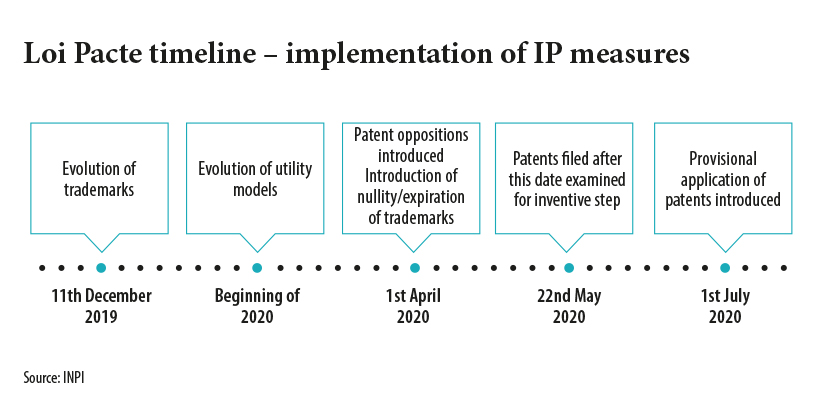 Implementation of IP measures in the Loi Pacte ©INPI

When do you expect to see results?
Independently of the COVID-19 crisis, we expect the effects of the reform to only become apparent in the medium term. The Loi Pacte strengthens French patents. For example, before its implementation, a patent could not be refused for lack of inventive step. This is now possible.

The ability to file oppositions should also enhance the value of the French patent. Up to now, a patent could only be contested in court via a nullity action – often in parallel to infringement proceedings. An opposition is faster and cheaper than a lengthy legal dispute and is therefore affordable even for small companies.

“The office can now refuse patents for lack of inventive step”

Even with the possible introduction of a unitary patent, national patents are still interesting for many companies. This is because, if the UPC cancels a patent, the patent becomes invalid throughout Europe. A strong French patent is a good alternative for the French companies.

The reform meant additional work for the INPI and you hired extra examiners. How far are you into the recruitment process?
We have increased the number of examiners from 105 to 125. However, our recruitment process is still ongoing. It is difficult to recruit engineers and patent attorney firms and companies also meet difficulties recruiting young people in patent law. We hope that measures taken within the framework of the Loi Pacte will help to raise awareness among students and make the profession more attractive.

Do the application fees reflect the higher costs generated by the additional staff?
No. Although we have hired more examiners, we have been able to cut back on administrative staff through the 2010s by not replacing departures and switching to electronic application procedures. This has helped absorb the additional staff costs.

Additionally, the EPO draws up the search reports on behalf of the INPI. This avoids the employment of engineers, and for applicants minimises the risk of a European patent being refused. This is because the same EPO examiners also examine the patent in later applications at the EPO.