Progressively more cross-border cases are being brought before German patent courts. This is having real consequences in the country's legal market. For the first time, international law firms Bird & Bird, Hogan Lovells and Hoyng ROKH Monegier lead the JUVE Patent ranking for patent litigation in Germany. 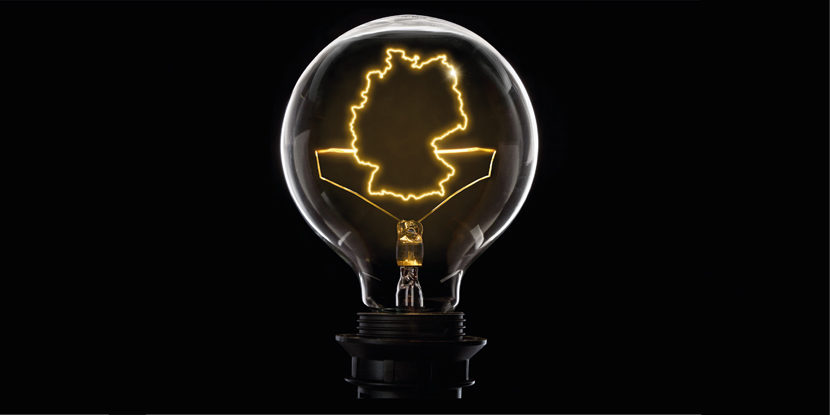 German patent courts play a central role in global cases. This is true for mobile telecommunication as well as pharma and biotech patents. However, as JUVE Patent’s current research shows, never before have so many proceedings involving parallel disputes in other jurisdictions been conducted. The new JUVE Patent ranking reflects this development.

This uptake is impacting the market for patent litigation firms. An international structure and expertise of leading partners is advantageous in landing work in global patent disputes.

Last year, the German patent teams of the three international law firms Bird & Bird, Hogan Lovells and Hoyng ROKH Monegier were already among the market leaders in Germany. Now the new top trio has cemented its place at the top of the JUVE Patent ranking. This is for two reasons. Firstly, all three had a high number of partner recommendations from clients and colleagues. Secondly, all maintain a high profile in cross-border cases.

A caseload of cases

All three law firms were present in numerous mobile communications cases. Furthermore, their involvement in international pharmaceutical and biosimilar cases was outstanding. Hoyng ROKH Monegier acted for Ceva in a multi-jurisdictional dispute regarding veterinary medicines, while Bird & Bird was successful for Teva against Mylan regarding a drug for multiple sclerosis. Hogan Lovells also acted for Eli Lilly in the high-profile dispute over pemetrexed.

JUVE Patent has published its litigation ranking lawyers for 2019.

Hogan Lovells is active on behalf of LG, Google and Vodafone in numerous lawsuits filed by NPEs. Both firms represent a number of originator manufacturers in pharmaceutical and biosimilars cases.

In the past year, suits in the semiconductor industry have also increased. The global dispute between Qualcomm and Apple was actually a battle for market share between Qualcomm and its competitor Intel. The dispute between chip manufacturers Globalfoundries and TSMC over chip technology, which mainly played out in German and US patent courts in late summer and autumn, had the potential to become a new global mega dispute. The two opponents, however, soon capitulated and settled the dispute with a long-term licence agreement.

Over the year, crossborder cases like these changed the litigation landscape in Germany. The three new market leaders were active for either the main parties, or one of the numerous co-litigants, in the most important proceedings. Above all, however, it was Quinn Emanuel Urquhart & Sullivan and Arnold Ruess reaping the fruits of the major German connected cars and chips cases.

Juve Patent therefore nominated both firms for the JUVE Law Firm of the Year Award 2019. Quinn Emanuel crowned a highly successful year by representing Qualcomm against Apple, and TSMC against Globalfoundries. The firm also represented Daimler in all connected cars cases.

But it was Arnold Ruess which in the end won JUVE Law Firm of the Year 2019. It has a broader client base than Quinn Emanuel, especially in the lifesciences field. Highlights also include representing Nokia against Daimler. It also represented Sisvel against Haier, in a groundbreaking FRAND case before the Federal Court of Justice. Also noteworthy is Arnold Ruess’ work for Hexal and Sanofi in pharmaceutical cases.

But even with this success Arnold Ruess has not yet made the leap to join the market leaders, which are divided into two groups. The three firms at the top of the market are followed by a second tier of market leaders. Quinn Emanuel resides here next to IP boutiques Bardehle Pagenberg, Krieger Mes Graf v. der Groeben, Rospatt Osten Pross and Wildanger Kehrwald Graf v. Schwerin & Partner.

There are varying reasons behind the gap between these highly-rated firms, and the top trio. Some, like Bardehle, Krieger Mes or Quinn Emanuel, are not as intensively involved in pharmaceutical cases, unlike the firms at the very top of the market. Others, such as Rospatt and Wildanger, were less involved in the year’s most prominent cases but their partners have a broad presence in the market.

However, in German patent infringement proceedings, the lawyers are not the only important players. The technical expertise of patent attorneys is also vital. This year, Hogan Lovells and Bird & Bird further strengthened their patent attorney teams, which are primarily focused on patent disputes.

But patent attorney-dominated firm are also expanding their litigation capacities. This means lawyers are having more influence in the firm, including in management. 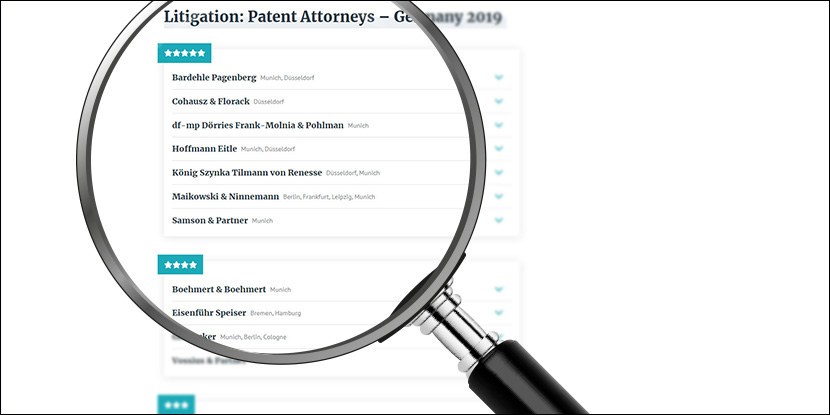 JUVE Patent has published its patent attorney rankings for 2019.

But Mathys & Squire is not the only UK law firm which, in anticipation of Brexit, is seeking access to the continental European market. In late autumn, Venner Shipley also strengthened its Munich office with a German patent attorney.

Furthermore, UK patent firms are becoming more and more attractive to patent attorneys from traditional German law firms. This is due to a dissatisfaction with old-fashioned management structures.