Once again, the European Patent Office has recorded more patent applications than in the previous year. However, at just over 4%, the rise is not as strong as in 2018. The highest growth is in inventions relating to digital technologies. How finances and the social climate among employees have developed will become clear in July, when the EPO presents its full annual report.

However, Campinos will not present a full annual report on the patent office’s development in March, unlike predecessor Benoît Battistelli. Campinos intends to present the main financial details to the public in July.

The EPO also granted almost 138,000 patents, 8% more than in the previous year. The number of new grants is regarded by observers as an indicator of the EPO’s productivity. However, productivity has weakened considerably compared with the last three years. In 2016, EPO patent examiners granted 40% more new patents than the previous year. In 2018, the figure was 20% higher than in 2017.

Under Battistelli, an efficiency strategy helped achieve this enormous increase. But this is still heavily criticised by employees. Many claim the strategy placed an enormous burden on patent examiners, leaving less room for an intensive examination on the novelty of an invention. The industry and lawyers also feared that the quality of granted patents would deteriorate.

The EPO has always dismissed these criticisms, but nevertheless reiterated that it took the concerns of its clients seriously. The quality of the European patent is a central theme in Campinos’ strategic plan. It was adopted by the Administrative Council last June. 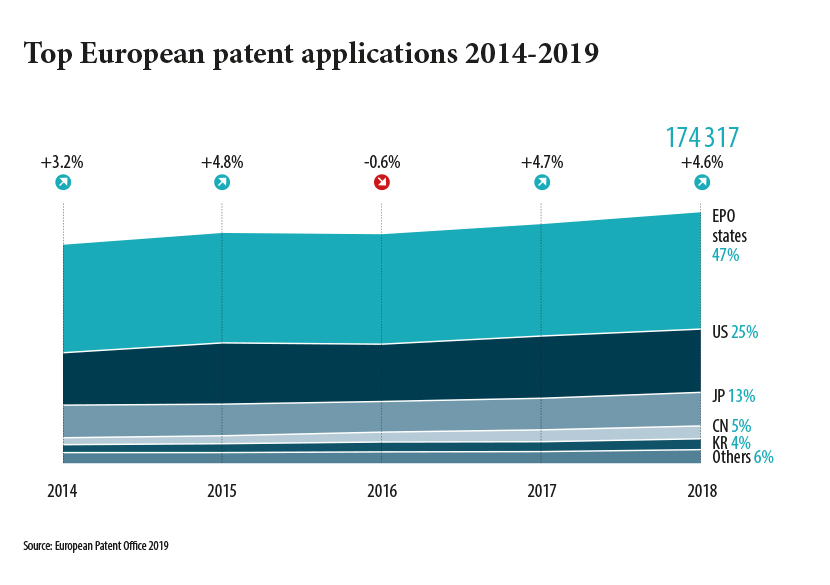 According to the EPO Patent Index, in 2019 Chinese companies were particularly active in filing patents in Europe. The report shows an increase of almost 30% in new patent applications, a well above average score. As a result, Huawei tops the list of most active applicants this year, with 3,524 new applications, displacing Siemens at the top of the ranking. The German technology group fell back to fifth place with 2,619 applications.

Samsung, LG and United Technologies are second, third and fourth respectively. These strong Asian companies are mainly active in mobile technology and telecommunications. But only four of the top ten applicants come from Europe which are, besides Siemens, Ericsson, Philips and Robert Bosch.

However, the rise in Chinese inventorship is primarily a matter for Huawei. The company filed 1,050 more patents than in 2018. This represents an increase of 42% and is likely down to the development of its 5G mobile phone standard. However, Huawei files very few inventions with the EPO directly. Most of its patents are filed as PCT applications.

Ericsson, which is also involved in the development of 5G, filed 10% more patents. However, Siemens filed only 5% more. On the other hand Philips filed around 5% fewer patents. 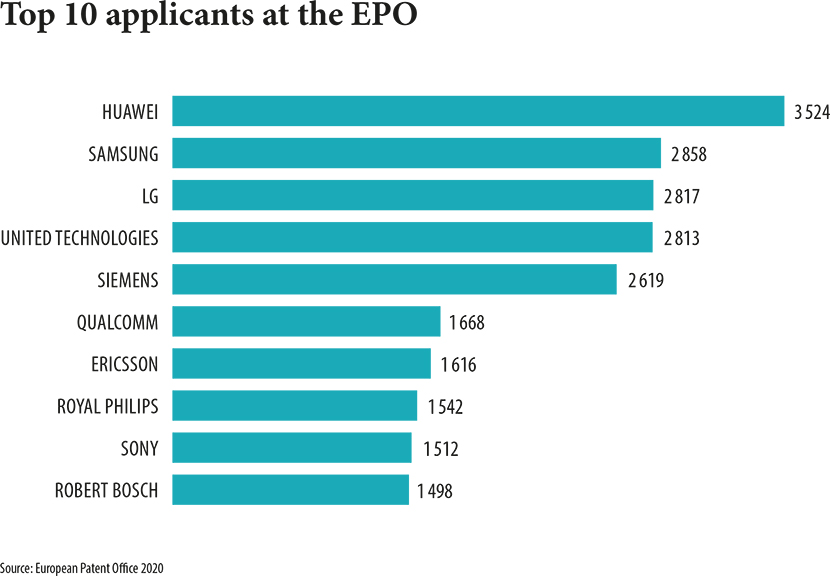 For the first time in over ten years, the field of digital technology saw the most patent applications filed at the EPO. This could be down to the strong activities of Chinese companies. In particular, applications in the fields of digital communication (+19.6%) and computer technology (+10.2%) rose strongly.

Expansion of the 5G mobile network is driving this development. Here, in addition to Chinese companies, companies from the US (+14.6%) and South Korea (+36.1%) play a key role. In comparison, applications from Europe increased only moderately by 3.1%. In 2019, Huawei, Ericsson and Qualcomm were the leading applicants.

US companies such as Alphabet (Google), Microsoft and Intel are very active in this field. However, once again Samsung, Huawei and Siemens are also among the top applicants. 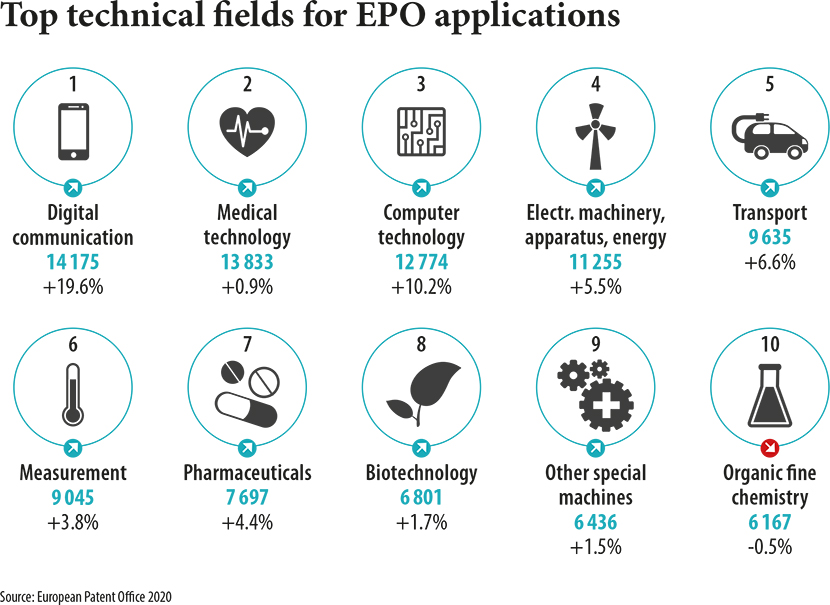 At 45%, almost half of applicants are from EPO member states. However, the country to file the most patents was the US with 25%, followed by Germany with 15%. Nevertheless, European countries do not match the growth rates from China.

Patent applications from Sweden (+8%) and the UK (+7%) showed above-average growth. But countries that typically file a large number of applications, such as Italy (+1.2%) and Germany (+0.5%), record minimal growth.

Furthermore, the Netherlands (-2.6%) and France (-2.9%) filed fewer patents than in 2018. Asian and US companies are a step ahead in the digital communication and computer fields, which could explain this surprising development.

For example, the internal conflict between parts of the workforce, particularly the trade union SUEPO, and the administration has still not been resolved. Campinos inherited the conflict from his predecessor Battistelli. Some labour disputes with former SUEPO leaders are still ongoing.

Additionally, the autumn months saw renewed protests by employees at EPO offices in Munich and The Hague. Above all, employees criticised the further efficiency drive and cuts in social benefits.

So far, the leadership and SUEPO have not yet succeeded in resolving their long-standing conflict. However, the EPO Administrative Council has made it a condition of Campinos’ first term in office that peace be restored within the administration. The most recent news from the Administrative Council is that the member states had increased pressure on the head of the office.

In addition, in late summer 2019 it became known that the EPO is facing a huge pension gap of several billion euros in the coming years. Initial proposals for savings also affect future salaries and pension entitlements.

The EPO has good revenues but also high liabilities. This is the conclusion of the EPO Financial Study 2019, presented by consultancies Mercer and Oliver Wyman last summer. The study looked at the EPO’s financial health for the period 2018 to 2038. The study caused further unrest among the workforce.