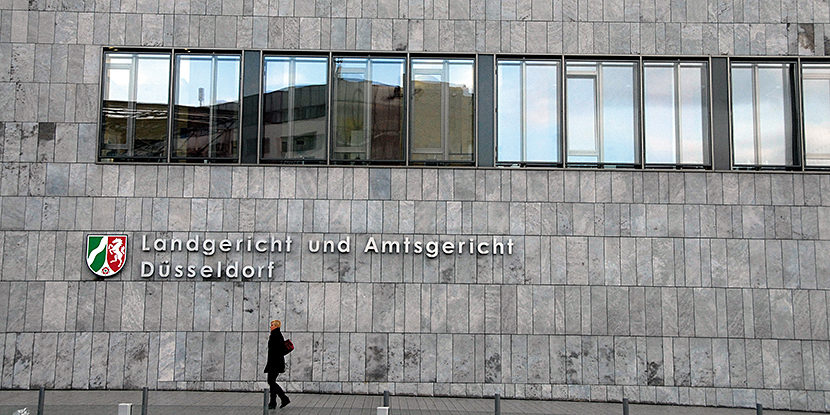 All three major German patent courts recorded only 744 new cases over technical property rights in 2018. In 2017 the figure was 969, which corresponds to a decline of around 17%.

The figures for 2017 and 2018 are only comparable to a limited extent. However, they confirm the belief communicated by many judges and lawyers to JUVE Patent that the courts had less to do in 2018.

Courts on the map

In 2017, Düsseldorf Regional Court published the case numbers for its three patent chambers 4a, b and c for the first time. JUVE Patent then researched the figures for new patent cases at the Mannheim and Munich Regional Courts. In contrast to Düsseldorf, the two south German courts have two chambers for patent cases.

In order to improve comparability between the courts, this year JUVE Patent asked the courts for their figures on technical property rights. This includes patent infringement, utility model, employee invention and entitlement suits. JUVE Patent also asked about main trials and preliminary injunctions.

In 2017, JUVE Patent asked about new patent cases in general and received slightly different information from the courts.

Furthermore, JUVE Patent has extended its research and asked the regional courts of Braunschweig, Frankfurt, Hamburg and Nuremberg for their case numbers for the first time. Braunschweig is the only court not to release its figures.

According to the data, the German patent courts saw a total of 786 new cases. In the same period, 517 cases were concluded by either judgment or settlement.

Munich Regional Court therefore saw the largest decline of the big three with 20%. In Mannheim there were around 19% fewer cases, whereas in Düsseldorf the figure is just under 15%.

In the same period, Düsseldorf Regional Court concluded 381 cases, and Munich 94 cases. Mannheim did not provide any information on this. 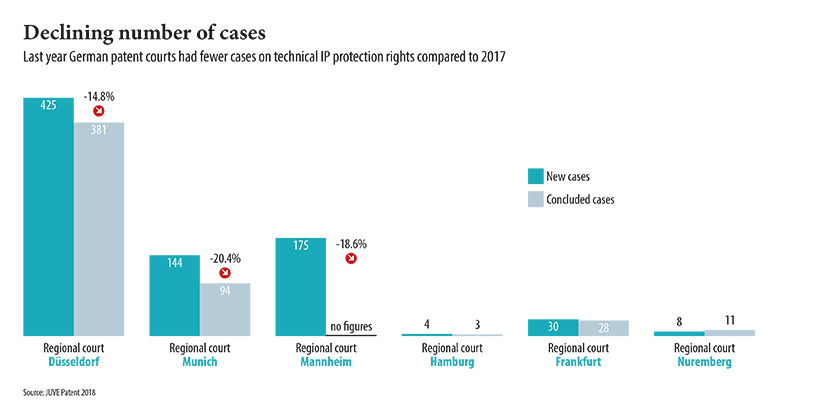 However, these figures do not change the fact that Düsseldorf is still by far the strongest patent court in Germany. The Regional Courts of Frankfurt, Hamburg and Nuremberg do not have the same high number of cases as the three major patent courts.

Düsseldorf is also likely to remain number one in Europe. The strong patent courts in The Hague, London and Paris typically have between 50 and 100 new cases annually. JUVE Patent does not have exact figures from these countries.

Figures from Hamburg Regional Court provide the biggest surprise. The 15th and 27th chambers had only four new cases on technical property rights in 2018. The court in Hamburg has been widely regarded as number four in German patent law. It was appointed as the fourth German local chamber a few years ago as part of the Unified Patent Court project.

As a result, Hamburg tried to sell itself more effectively as a patent location, but it appears this was unsuccessful. With 30 new cases, Frankfurt is far ahead of the northern city.

The courts did not give any reasons for the decline in the number of cases. This could be attributed to the fact that the German economy was in full swing in 2018. Companies usually complain less when business is doing well.

Last year, German lawyers and patent attorneys unanimously reported that SEP holders found it more difficult to file new lawsuits than in previous years. The reason for this is the differing interpretations among the German patent courts of the CJEU’s FRAND provisions from the Huawei vs. ZTE decision.

The regional courts in Düsseldorf and Mannheim, for example, apply the guidelines from Luxembourg differently. The German Federal Court of Justice has yet to express an opinion on the guidelines and ensure a uniform interpretation.

This could soon change, because the Federal Court of Justice recently confirmed a patent from Unwired Planet. There are still parallel infringement proceedings pending at the highest German patent court and these include FRAND issues. It is possible the court will now hear and decide the case in the second half of the year.

The uncertainty surrounding SEP and FRAND may also have been a reason why non-practising entities – which have made very intensive use of German patent courts in recent years – seldom filed suits in Germany in 2018.

The only significant new major lawsuit was Conversant’s against LG, Huawei and ZTE at the Munich and Düsseldorf Regional Courts. The NPE had sued over three UMTS and LTE patents. The dispute has also spilled over into London and Paris.

Other NPE suits were heard by German courts in 2018, but these had been filed in previous years.

The dispute between Unwired Planet, Huawei and HTC also began in 2014, but is still ongoing.

In addition to the NPE suits, the German patent courts experienced an astonishingly high number of large-scale proceedings. Above all is the high-profile dispute between Qualcomm and Apple over chips for mobile phones, fought out around the globe.

In December 2018 Munich Regional Court stopped the sale of older iPhones in Germany. Qualcomm also had the verdict enforced against the record security bond of €480 million. The two opponents finally settled in April 2019.

The patent pool MPEG LA also filed a complaint against ZTE and Huawei over the AVC/H.264 video coding standard before the Düsseldorf Regional Court in 2017. In December 2018 the pool scored a sales ban on mobile phones from the two Chinese companies. This dispute was also settled in early 2019.

Other important disputes before the German courts last year include:

The first lawsuit for so-called connected cars patents, which began in 2017, also attracted a great deal of attention. The chip manufacturer Broadcom had sued the manufacturers VW, Audi and Porsche in Mannheim for infringing chips for wireless communication in cars.

The court in Mannheim heard the initial suit in 2018, and in November 2018 the chip manufacturer and the VW group finally reached a settlement.

The dispute was the first test case between owners of connected cars patents and the auto industry. The trend towards more lawsuits in this regard has now kicked into high gear.

In the meantime, Broadcom has filed further lawsuits against Daimler and BMW in Mannheim. Daimler also faces complaints from Nokia over 3G and 4G mobile communication standards at all three top courts. In addition, the NPE Innovative Foundry Technologies has sued Ford and VW in Düsseldorf over chip technology in infotainment modules.

It is generally expected that connected cars lawsuits will continue to increase, resulting in rising numbers at the patent courts again. But they are already keeping lawyers and patent attorneys busy.

Because regardless of the actual claims filed, the need for advice in the run-up to and during such claims is high. As a rule, it is not only the carmakers who are affected, but also the entire supply chain – from connectivity modules to chip suppliers.