While Germany's patent chambers are experiencing an increase in case numbers, the downward trend in many other important European patent locations continues. Parties filed fewer new patent suits in London, Milan and The Hague. The only exception was Paris, which recorded a fifth more new lawsuits than in the previous year. 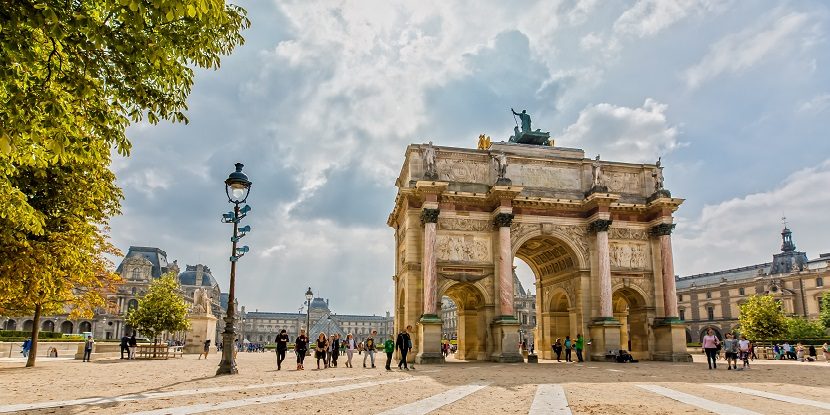 Over the past few years, Europe has seen a general decline in the number of patent cases being filed by parties. However, first Germany's main patent locations and now the patent courts in Paris appear to be bucking the trend ©susanne2688/ADOBE STOCK

At the end of June, for the fifth time since 2018, JUVE Patent published the figures of newly-filed patent suits in Germany. This year, the result was surprising. Results show that parties filed almost ten percent more patent lawsuits in Germany in 2021 than in the previous year.

Now, for the second time, JUVE Patent has researched the case numbers of other important European patent locations. Unlike the German patent courts, most of these once again saw a decline in newly filed patent suits, with only France bucking the trend.

According to recently-published statistics by the Judicial Court of Paris, the 3rd chamber of the Paris Court of First Instance recorded 174 new patent suits in 2021. The number constitutes an increase of 20%, compared to the previous year. In the first year of the coronavirus pandemic, the number of newly-filed patent suits in France totaled 145.

The number of settled cases did not rise quite as sharply as the number of new cases filed. The 3rd chamber, which is responsible for IP, concluded 170 cases in 2021. This is about 5% more cases than in 2020, where the year’s 162 cases ended with a judgment, withdrawal or settlement.

Speaking to JUVE Patent, Nathalie Sabotier, chair of the 3rd chamber, says, “Thanks to the measures we have taken to process the cases, we drastically reduced the backlog of patent cases. As of May 2022, this stood at 142 cases, compared to 238 cases in the same period last year.” 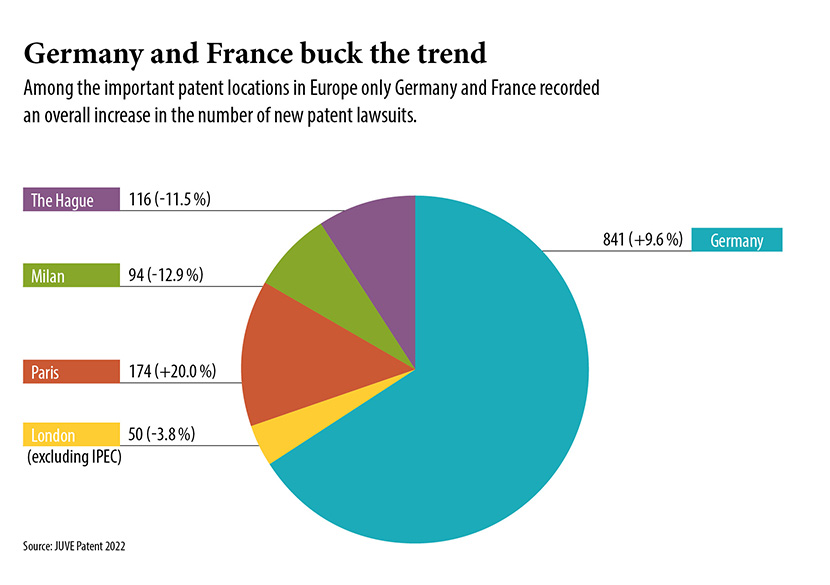 Nevertheless, the chamber responsible for IP proceedings remains understaffed. Only two judges currently staff each of the chamber’s three sections, instead of the planned three. In autumn 2021, two experienced IP judges Carine Gillet and Florence Butin moved from the Judicial Court of Paris to take up new positions in other courts.

At the same time, the first-instance judges now regularly handle the French parts of complex pan-European cases. This is especially if the cases concern mobile phone and pharmaceutical patents. For example, the French courts have been very visible in the dispute between Intellectual Ventures and various telecommunications companies over a patent for a multicarrier modulation system, as well as in the series of lawsuits between MSD and various generic drugs companies over an SPC for cholesterol-lowering drug Inegy.

Another example is the complex pharmaceutical dispute between Bayer and Teva over cancer drug Nexavar.

Paris and the UPC

In both the first and second instance, French courts maintain a reputation for granting preliminary injunctions much less frequently than judges in other countries. For example, the French decision in the dispute between Illumina and MGI over DNA sequencing technology differed vastly from previous judgments handed down by courts in the UK, Germany and Spain.

Furthermore, France is gaining importance as a major venue for patent litigation with Paris set to host a central division for UPC litigation. However, the loss of the UK in the UPC project, which also means the loss of London as a venue for pharmaceutical case hearings, should also enhance the city’s role in the new court project. Paris and Munich are stepping in to share the burden from London while the UPC’s Administrative Committee decides on a suitable alternative.

On top of this, the committee recently announced that from 8 July, it will start selecting which judicial candidates it has selected to work as judges at the UPC. In autumn 2021, a JUVE Patent survey showed French judges are gaining visibility in the international patent scene. Which of them the committee will select is a question of great importance in French, as well as European, patent circles.

Despite Brexit and its decision to leave the UPC, the UK remains a hugely important location in the European patent market. According to statistics obtained from the Ministry of Justice, parties filed 50 new actions in patent disputes at the High Court of England and Wales in 2021. However, the numbers have dropped by 3.8% compared to 2020, when the number was 52. The first-instance court in London only recorded fewer lawsuits in 2018, with parties filing 40 cases.

The downward trend of recent years has also continued into the first quarter of 2022, where parties filed eight new patent lawsuits. This is the lowest figure since 2018, when the High Court recorded only six new patent suits from 1 January to 31 March. However, JUVE Patent has access to figures from 2016.

Here, the long-standing trend is that parties tend to file fewer cases in the UK during the first quarter of the year. Numbers usually increase from the second half of the year onwards.

However, these figures do not take into account proceedings at the Intellectual Property Enterprise Court (IPEC), which is not part of the High Court. The IPEC hears patent disputes of small and medium-sized companies, many of which are of minor economic importance.

However, here observers can also see a downward trend in case numbers. According to Ministry of Justice figures, the total number of new lawsuits at the IPEC in 2021 was 128. This represents a 17.9% decrease compared to parties filing 156 cases over the previous year. In 2019, parties filed 217 cases at the smaller court.

The situation is similar when comparing the first quarter. While parties filed 31 new cases at the IPEC in the first three months of 2021, they only filed 21 new cases in the same period of 2022.

On the other hand, the UK withdrawing its participation in the UPC does not detract from its attractiveness for high-profile patent cases.

Once again, the court hosted numerous patent disputes. Parties are conducting many in parallel at other European courts, such as the dispute between Alcon and AMO over laser technology for eye surgery.

The UK also remains an important venue for SEP proceedings. Earlier this year, a major FRAND dispute between InterDigital and Lenovo began at the UK High Court. This was the first major SEP and FRAND case to reach trial in the UK, since Unwired Planet prevailed against Huawei in 2020 at the Supreme Court. Five InterDigital portfolio patents are also the subject of ongoing technical trials.

In the Netherlands, too, plaintiffs recently filed fewer new lawsuits in patent disputes. According to official statistics, the District Court of The Hague counted 116 new proceedings in 2021. This is a decrease of 11% compared to 2020, when parties filed a total number of 131 cases. However, in the same period, the court concluded 124 cases. This is around 20% more than in 2020, when the court presided over 103 cases.

Such decisions on cross-border injunctions continue to attract the interest of the European patent community. Thus, plaintiffs in Dutch courts regularly obtain cross-border injunctive relief for their patents. Google, however, learned that this strategy does not always work out. The District Court of The Hague denied the US technology group the requested interim relief and an injunction against Sonos. Google had sought to prevent the company’s alleged infringement of EP 621 in the UK, Italy and Finland.

The Netherlands is also an important venue for SEP battles, demonstrated by high-profile proceedings such as Ericsson vs. Apple and Philips vs. Wiko. By declaring jurisdiction to begin FRAND proceedings between Vestel and the patent pool Access Advance, the Netherlands could become another important forum from which its judges can dictate global licence rates for SEP holders.

Litigating parties and law firms turn to Italy particularly for patent proceedings in the pharmaceutical and biotech sector. Furthermore, its northern city of Milan is already set to host a UPC local division. The Italian government has also now proposed that the city host the UPC central division for pharmaceuticals which was previously planned for London. However, the Milan Court of First Instance is also recording declining case numbers.

In response to an enquiry from JUVE Patent, the court cited 34 newly-filed patent infringement suits on the merits for 2021. In the same period, according to the court, 17 trials on the merits were settled by judgment. A further 46 were otherwise terminated, for example via settlement.

In 2020, the number of newly filed infringement actions on the merits amounted to 58 cases, plus around 50 injunction proceedings.

However, the numbers provided for Italy concern only the Court of Milan. Although it is Italy’s busiest patent court, it is not the only court in Italy which is competent in patent matters. A certain case load is also present in the other main patent chambers, and in particular Turin, Genoa, Venice, Rome.

But back in Milan, patent lawyers regard the court’s IP chamber, presided over by judge Claudio Marangoni, as highly competent. This is especially in pharmaceutical disputes. For example, Bristol Myers Squibb is currently battling Sandoz in Italy over a blood-clot drug patent, while Novartis is fighting various generic drug manufacturers here over its multiple sclerosis drug fingolimod.

The number of pan-European proceedings is growing steadily, especially in mobile communications and life sciences.

However, experts hold mixed opinions regarding the extent to which patent owners will entrust their property rights and their enforcement to the UPC. Many companies, especially in the pharmaceutical sector, are still reluctant to enforce their patents for blockbusters before the supranational court. The risk of losing patent protection in the entire UPC area is too great if the outcome is negative.

Many observers assume that the national courts will therefore continue to hear many patent lawsuits in the coming years. The UPC will have to prove itself.