The latest connected cars development sees the CJEU decide which company in a production chain is entitled to a FRAND licence. This follows the Regional Court Düsseldorf referring various questions to Luxembourg this morning. Beyond this, the CJEU should also clarify the requirements for the willingness of implementers to take a licence, as set out in the Huawei vs. ZTE judgment. Such a move could influence most SEP cases in Germany.

FRAND licences in production chains are the main point of contention in connected cars disputes – in particular, in the actions brought by Nokia against Daimler and its suppliers. Whether an SEP holder like Nokia can freely decide, without breaching its FRAND obligations, to whom in the supply chain it offers a licence is the key question in the current lawsuits. Now, the CJEU will decide on this question.

This topic is mainly important in the ten disputes in Nokia vs. Daimler and its supplier of connectivity modules. These include Huawei, Continental and many others. The cases are running before the Regional Courts in Düsseldorf, Mannheim and Munich.

Today, Civil Chamber 4c of the Regional Court Düsseldorf, under presiding judge Sabine Klepsch, referred one of the cases (case ID: 4c O 17/19) to the CJEU for clarification.

For a long time, Nokia has only offered a licence to Daimler, and not to the latter’s suppliers. But Daimler always wanted the suppliers to take the licence. Furthermore, the suppliers have always emphasised their willingness to take a licence. For example, Huawei, an important supplier of connectivity module preamplifiers, asked the Düsseldorf court to order a FRAND licence (case ID: 4c O 53/20).

Following the hearing in September, Nokia had offered a licence to suppliers. However, the licence offer has not prevented the submission to the CJEU.

The Düsseldorf judges are now asking the CJEU to take a detailed position on ten very detailed questions. The main question, regarding the production chain issue is, “Is there an obligation for priority licensing of suppliers?”

The questions go far beyond the matter of requirements for a FRAND licence in a production chain. Rather, the questions ask the CJEU to clarify the obligations of the SEP holder and implementer, as set out in the Huawei vs ZTE judgment (case ID: C-170/13).

Further to this, the Düsseldorf judges also ask when a licence offer from an SEP holder is to be considered FRAND-compliant.

Both questions are controversial between the German patent courts. Recently, time and again the courts have released differing judgments on the issue. Even the Federal Court of Justice had not clarified the questions in its recent ruling Sisvel vs. Haier (case ID case ID: K ZR 36/17). Now, the CJEU should address this.

However, Mannheim Regional Court did not follow the recommendation. Instead, in August the judges declared that Daimler had infringed one of Nokia’s mobile phone patents. The court imposed a security deposit of €7 billion for enforcing the judgment and declared Daimler an unwilling licensee (case ID 2 O 34/19). 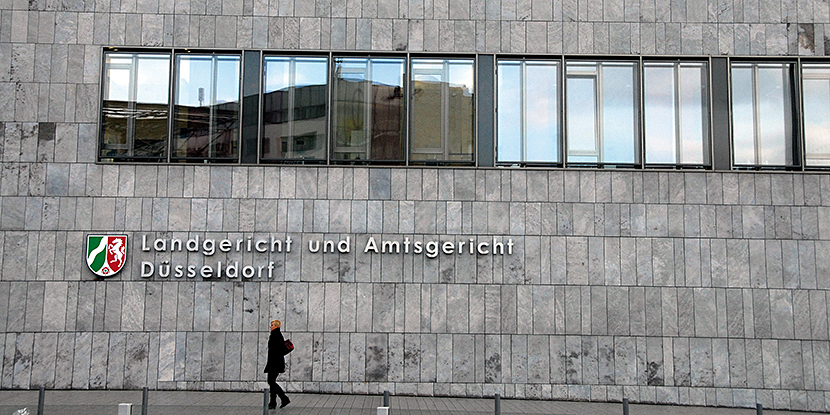 The Regional Court Düsseldorf: in September, representatives of Nokia, Daimler and many suppliers held intensive discussions on whether a submission to the CJEU is necessary.

Today’s submission in Nokia vs. Daimler had already emerged at the oral hearing on 3 September. Originally, the Court of First Instance was to deliver its judgment a fortnight ago. However, court circles reported that, for internal reasons, the court extended deliberations for two weeks. According to JUVE Patent information, the Regional and Higher Regional Court judges once again agreed on the exact wording of the submission.

Both instances had repeatedly shown great interest in clarifying the question of the FRAND licence in a production chain in Luxembourg.

However, few experts expected that the Düsseldorf judges would go far beyond the question of the production chain. The referral could have far-reaching consequences for SEP cases in Germany. In initial reactions, experts say that the patent courts will probably suspend such cases where it is unclear whether the SEP offer is FRAND.

The referral to Luxembourg has a considerable impact on the connected cars lawsuits of Nokia against Daimler.

Thus, the Regional Court Düsseldorf has suspended the current Nokia claim against Daimler until the CJEU reaches a decision. However, the judges would not have to suspend further lawsuits by Nokia if they concern questions outside of the production chain.

Many now experts assume that the Düsseldorf, Mannheim and Munich courts will not rule on any connected cars cases. Rather, it is likely the courts will wait for the CJEU’s verdict.

Yesterday, the European Commission published an IP action plan. This is likely to be a step backwards for the automotive industry, because the commission only marginally refers to the importance of SEPs for the car industry and connected cars. However, the action plan emphasises the importance of SEPs for other industries such as health or energy.

The commission says, “In that context, it is essential to have stable, efficient and fair rules governing the licensing of SEPs.”

In the short term, the commission wants to facilitate industry-led initiatives to reduce friction and litigation among players in specific sectors. In parallel, the commission will consider reforms to further clarify and improve the framework governing the declaration, licensing and enforcement of SEPs. The action plan emphasises that it “will explore the creation of an independent system of
third-party essentiality checks in view of improving legal certainty and reducing litigation costs.”

In the Nokia vs. Daimler case, the CJEU will ask the commission and the EU Member states for their opinions. It is more than likely that the commission will follow this request. (Co-author: Konstanze Richter)