Hogan Lovells wins the JUVE Award IP Law Firm 2017. The German patent team was present in nearly every important case in the telecoms sector and landed a major victory for Merck concerning the HIV drug Raltegravir. 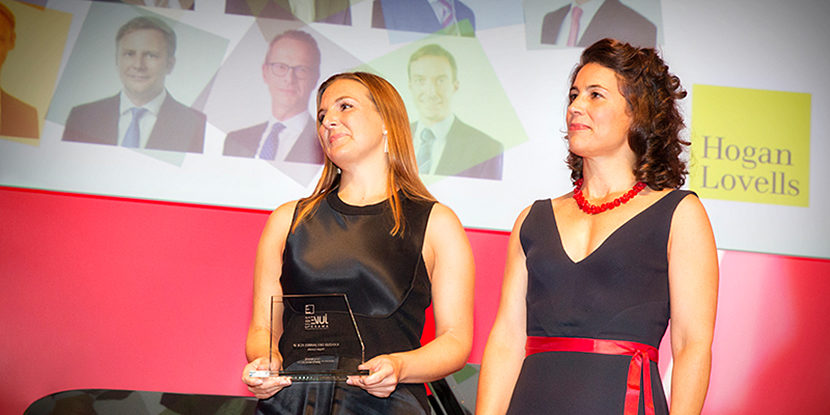 Miriam Gundt accepts an award on behalf of Hogan Lovells from Birte Gall (New Work Partners, Berlin) at the JUVE Awards at the Frankfurt Opera House.

It is rare that a leading firm can outpace its competitors even more, but it is precisely this that the team around Andreas von Falck at Hogan Lovells is threatening to do. The firm was involved in virtually all of the year’s major patent battles: be it Blackberry, HTC, LG or Vodafone – Hogan Lovells fought NPEs on the industry side more often than any competitor. Defending Apple in the mobile communications battle against Nokia, which consisted of no less than 32 suits, was a particular challenge to the team’s capacity. The fact that the team was able to prepare another series of lawsuits at the same time for Nikon against Carl Zeiss regarding chip-production machines, demonstrates its unique clout, especially as Hogan Lovells also won a number of pharmaceuticals suits requiring particular legal dexterity.

The highlight of the successful year was an extremely rare compulsory licence for HIV medication that Miriam Gundt and her team won for Merck, all the more so since Gundt only made partner in 2015. The practice’s potential was underscored by the next partner appointment just two years later. The fact that Alexander Klicznik is dual-qualified as a lawyer and patent attorney and that Hogan Lovells is increasingly banking on technical experts, set the market talking. And the market should be concerned that the IP practice, already extremely strong throughout Europe, is now exporting its patent expertise and building its own US team. Hogan Lovells is thus not only protecting its excellent US connections, but pitting itself against the US firms pushing their way into Europe on their home turf. One example: Google hired the Munich office for litigation work for the first time – up to then, the Internet corporate had been firmly in the hands of Quinn Emanuel. 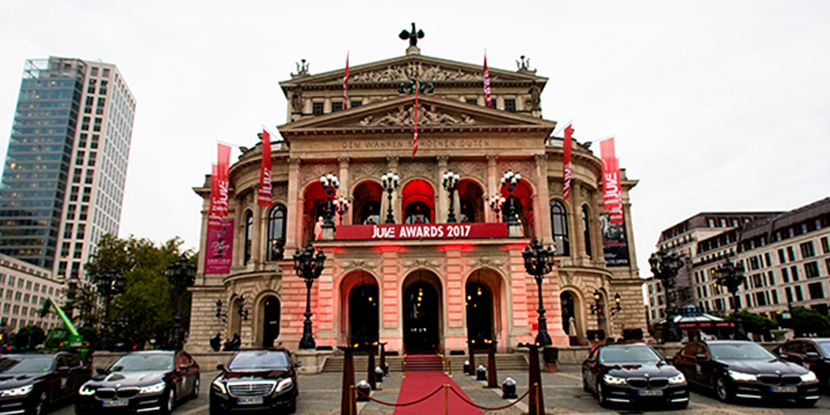 The prestigious JUVE award is presented every year in October at the Frankfurt Opera House.

The track record of this patent team around Bernhard Arnold and Cordula Schumacher is remarkable. The Düsseldorf IP boutique won national renown with its advice to Sisvel, Nokia, Hexal and Wilkinson. In trademark law, the team around Peter Ruess won over new clients with its innovative ideas.

Compared to many of its rivals, this firm was quick off the mark when it came to integrating patent attorneys who specialise in litigation. The arrival of a team in Hamburg brought additional ties to core client Nokia, for whom the team around Christian Harmsen won a major coup in the patent battle against Apple.

The young team of trademark lawyers can do no wrong: it consolidated contacts to well-known names like Nike, Samsung and Procter & Gamble. Furthermore, DLA continues to expand to other important sectors. With its advice on influencer marketing and digitalisation, the firm is playing a role in pioneering issues.

Strategically, the firm’s advice on digital business models is proving a clever specialty with which it attracted US clients such as Yelp and LinkedIn. Here, the German partners make skilful use of the offices in Silicon Valley. The appointment of two salary partners serves to underline the practice’s success.

Find out more about the JUVE Awards