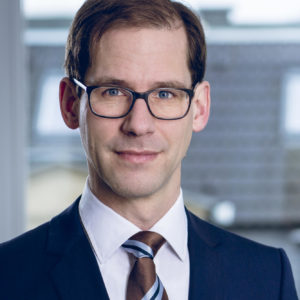 For many years, Joerg Schmidt has represented and advised clients in the areas of patent and utility model law, as well as design patent, trademark and unfair competition law. He also works in the areas of copyright law. He has extensive experience in litigation, especially in preliminary injunction proceedings and independent proceedings for taking evidence before major national courts, as well as proceedings before the European Court of Justice/General Court in cases relating to EU trademarks and Community designs. He is also an expert on border detention and product piracy cases.

Mr Schmidt studied law in Münster and completed additional training in IP law. Having passed his first state examination, he joined the IP and press law department of a renowned Cologne-based firm. He then completed internships in Münster, Cologne and San Francisco. In 2002 he was admitted to the bar in Dusseldorf and joined Wildanger Kehrwald Graf von Schwerin & Partner mbB. He became a partner of the firm in 2008.

In the Juve Handbook of Commercial Law Firms 2014/2015 he was praised for “having a deep knowledge of procedural matters and a pragmatic approach” and was recommended again in the 2017/2018 edition for trademark and design litigation.