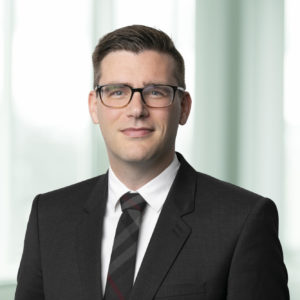 Michael is a partner in the engineering department of Weickmann & Weickmann. Michael’s clients are active in the fields of engineering as well as mechanics and telecommunications, e.g. industrial vehicles, metalworking, elavators, information technology, etc. As patent attorney he has extensive experience managing patent portfolios, in particular drafting and prosecuting of applications as well as patent/utility model litigation before the EPO and the German Courts. Further fields of expertise include preparing FTOs as well as infringement and validity opinions, licencing agreements and inventor’s remuneration.

Michael has studied Physics at Karlsruhe University and obtained a doctoral degree in experimental particle physics at KIT while working at the European Organisation for Nuclear Research CERN in Geneva. He has been working in the field of intellectual property since 2012 and is a German Patent Attorney as well as European Patent Attorney since 2016.